In nearly 10 years of marriage, Kevin and I have had another adult living with us for a total of 5 years.  Three different amazing ladies, whom started as relative strangers prior to their extended stays.  I usually catch some strange looks, and often get the question ‘how does THAT work’ from individuals as it comes up in conversation.  The simple answer, it just does.  However, I know the answer is far more complicated than I will likely EVER understand.  It is being woven together outside of my understanding of time and reason by a God who does immeasurably more than I could ever ask, think, or imagine!

Hebrews 13:2 (msg) says “Be ready with a meal or a bed when it’s needed.  Why, some have extended hospitality to angels without even knowing it.”  I consider myself lucky, having the opportunity to KNOW that it is, and has been, angels that have occupied my home.
Renee was the first angel we got to entertain for a season.  She moved in after a particularly rough year for Kevin and I, shortly after we had found out we were pregnant with Cub.  The ‘original’ plan, was for her to stay until the baby was born, about 7 months at the time, and then move out.  She stayed with us until JUST a few days before we moved to Virginia, two and a half years later.  It broke all of our hearts to have to separate.  She was and always will be Aunt NeNe, as she was an ever present light in our life for those first two years of Cub’s life, and did more for Kevin and I than she could every possibly know. 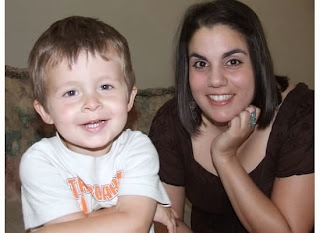 Cub & Aunt NeNe on her Birthday, a couple months before the move in August 2010.
The next series of events, is actually what triggered this blog post in the first place.  I was explaining them all to a girlfriend today, and after she heard them, she exclaimed “You are writing ALL of this down so the boys can see the miracles God has done for you, RIGHT?!?”  Having not done so to-date, I figured I better get right on that!
God’s hand was ALL over our move to Alexandria, so much so that I can’t even put it all in here cause it would make what’s likely already going to be long…. ridiculously long, so we’ll stick with the angels.
When moving up here, our plan was for me to be a stay-at-home mom.  God laughed and said, ‘your funny, how bout you keep your job so those sweet little boys I gave you can keep their lives, cause y’all will straight up kill each other on your own’.  Well played God…. Smart. (also, that is how God talks to me sometimes…. true story).
After a tumultuous first year of going through 4 providers in one year, I was EXHAUSTED.  Any mom knows, it is heart wrenching trying to find qualified care to trust your babies with, and I was SERIOUSLY questioning if I was supposed to be doing this?  Why was it THIS hard?!?  I thought I had mixed my signals or something.  I had viewed the fact that my job let me move across the country and work remote as a miracle, and thought I was supposed to keep it because of that…. but this had me seriously questioning things….  THEN, in August of 2011, we met Stephanie our second angel. 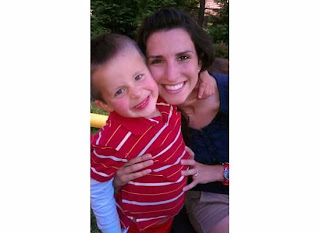 Cub and Ms. Stephanie on his 4th Birthday
Stephanie, had just married Mike, the new youth director at our church, and DC was her first major move away from family in Alabama.  We became fast friends.  Well, I fast friend-ed her, maybe stalked her slightly… She was more shy (everyone is more shy in comparison to me) so maybe she friend-ed me a little slower.  She was a GOD SEND.  She loved the boys.  They loved her.  I got to have one of  my best friends come over and hang out all day every day.  She was there day in and day out of the second hardest year of Kevin and I’s marriage, through a roller-coster of emotions, including two miscarriages.
However, it was our first miscarriage that paved the way for our third angel to enter our lives.  We had moved into a slightly bigger place, that September, to make room for baby, only to discover they could not find a heartbeat at my 12wk sonogram.  That same week interns were moving to DC from all over the country to work at our church, and they needed host homes to live in.  Knowing the program was 9 months long, and it would take me at least that long to need the room again, we opened up our home to what became our next angel, Melanie.  God had a serious purpose for this one though, and we barely saw her, she was at church 24/7….. The program was CALLED 24/7…. I kid you not. 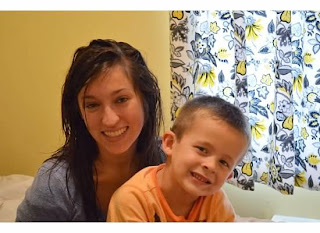 Melanie & Cub just hangin out during her minimal free time.
(I know you’re thinking it, but don’t say a thing…  The fact Cub is in every pic is not lost on me either.  Mental note firmly written force Logan in more pics and now AJ too!)
Moving on…. things started to get REALLY cray cray…..
On a Sunday after church, Rosah approached me.  At this point, we only knew each other in passing.  Out of the blue, she said she felt God was calling her to help me with my boys in some way and if I ever needed anything to let her know.  I politely thanked her, and let her know we had Stephanie, but would keep her in mind.  Two days later, on one of my crappiest days in recorded history, at 8:00am with tears in her eyes Stephanie showed up to watch the boys and let me know that 10 days from that moment, she and Mike would be moving to Colorado.  Commence massive cry fest.  Seven hours later, at my 12wk sonogram for our second baby bean, they could not locate the heartbeat and we were informed this pregnancy would not progress either.  Numb….. except for a still quiet voice that said ‘Rosah’.  Hope.  I called Rosah immediately, and she was available to start the day Mike and Stephanie were moving.  Incredible.
It was August 2012 when Rosah, my 4th angel, came to our rescue.  Rosah lived with Kwanale, another fabulous woman from our church.  The boys quickly fall in love with Rosah, and she them, and I pick up some of my emotional wreckage in the wake of losing one of my best friends out here and lil baby bean on the same day.
However, as the holidays approached, my newest angel was discovered.  Yes, I realize God doesn’t misplace His angels, and so the concept of then having to ‘discover’ one, does not compute…. but I was a lil perturbed that despite Him telling me in Job 1:21 “The Lord gives, and The Lord takes away”, that He was in fact doing just that.  I was havin myself a good ‘ol Job moment!  (o.k. exaggerating just a tad there, but close ;))  In all honesty I was excited for Rosah as she was invited to work on staff at the Church, the perfect place for her! 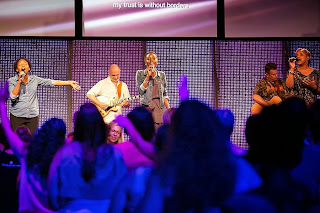 Rosah, Center stage, leading us in Worship.  Girlfriend’s got some serious pipes.
Things are about to move real fast from this point, I hope you can keep up, cause the end result is nothing short of miraculous!  Key pieces in play as we approach the 2012 holiday season.  Melanie is still occupying our 3rd bedroom.  Rosah who lived with Kwanale has moved out, and now lives with my friend Terri.  Rosah is going on staff at church on Jan. 7th, and will no longer be able to watch the boys.
We interrupt the previously scheduled programming to take a little field trip into the life of a women TOTALLY unbeknownst to us at this time,  Hannah.   Hannah experiences a little Christmas miracle of her own, in the small sleepy town of Pentwater, Michigan.  I should point out, dear reader, this sleepy little town is only a 30min drive from where I spent most of my summers growing up.  God’s just funny like that I guess.  What was this Christmas miracle???  A sparkly engagement ring from the love of her life, Tim, who happens to be a Marine stationed in, you guessed it, Washington D.C..   Hannah can’t imagine spending the next two years of their long engagement apart from her main man, and sets her sights on finding something a little closer.  She hits up the Internet, and WHAT DOES SHE FIND?!?!  Kwanale’s listing for a room available to rent since Rosah had recently moved out.  Hannah jumps at the chance, packs her bags, and moves across the country to start the New Year that much closer to her new Fiance, unsure of what that future might hold for her.
Hannah’s first Sunday in Alexandria, January 6th , Kwanale invites her to attend church with her at DC Metro.  Knowing that Hannah is looking for a job, and that Rosah had just left an opening in our home, Kwanale approached me after service and introduced us.  I invited Hannah over for lunch the next day to see if we’d be a ‘good fit’.  She stayed the whole afternoon.
Melanie returned from her Christmas break, back home in Minnesota, with news that she had decided to leave the 24/7 program a couple months early, and would be moving back to Minnesota at the end of the month.  A week later, we learned that Kwanale’s work Visa was expiring and she would be moving back to South Africa at the end of the month as well….. leaving me with an open room and Hannah with no place to live.  I. MEAN. REALLY?!?
Sooooooooooo…….. Hannah moved in, JUST as I passed the 12wk mark with a healthy heartbeat on our NEWEST little bean.  This past year, has been INCREDIBLE.  Well obviously, as this post indicates, the past FEW years have been incredible.  Hannah continues to bless our family beyond measure in every way imaginable, I DO NOT deserve her, but will happily house her forever if she’d let me.  (We’ve seriously offered to start looking for a place with a sound proof honeymoon suite for when they get married)… you know me… you know I’m not kidding. 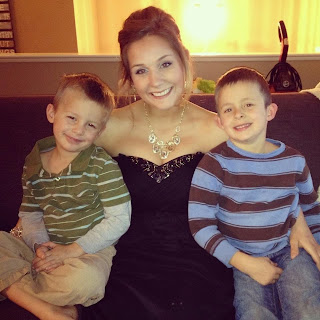 Hannah and the boys before the Marine Corps Ball
(Finally one WITH Logan and I even had more than one to pic from, apparently Logan just had to get happier in front of the camera, and I’m not a horrible mother for leaving him out.)
I’d like to say writing this will ensure I never question God still…. but I know me, and how easy it is for me to lose sight of the forest for the trees.  Case in point, the fact I  didn’t even think to write this post until a year+ after many of the events transpired, and then at the behest of an exasperated friend that is like DO THIS… DO THIS NOW!   It really is awe inspiring, and ridiculously humbling.  You guys know me, I don’t deserve this level of detailed care from God who just so happens to be commanding the Universe at the same time.  But, I’d be an idiot not to say Thank you and enjoy it for however long I get to hold these precious gifts and angels in my life, and am thankful for how much richer each one has made my life, my family, and our home!  LOVE YOU GUYS!!!!