I met Glennon!  For any that don’t know who she is…(your probably not reading this), but I’d estimate it’s equivalence to be a tween meeting Justin Beiber…. she is my equivalent of Bieber-fever.  I’d hoped to say something memorable, maybe end up the inspiration of a future blog post or something, but alas I just shrieked and squealed and jumped up and down, and clapped like your typical tween.  However, it was cooler, because Glennon was also jumping up and down and squealing and hugging, so it just felt like I’d imagined it would, like I’d imagined her. 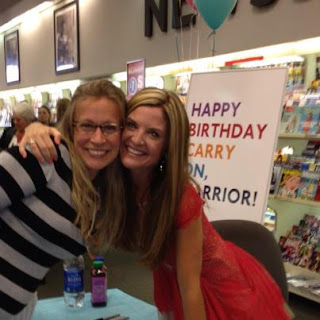 It didn’t hurt that my birthday is coming up, so I had some leverage to twist Kevin’s arm to let me embark on this little boondoggle.  He likens my obsession with her blog to my love of cheesy chick flicks and rag mags, pointless.  He doesn’t get it.  She speaks what I think, does what I dream of, and remains so grounded through it all.

The signing was 7-9pm, so ofcourse I had to leave at 4:30p cause I was terrified of rush hour traffic.  There was no traffic, I pulled in at 5p.  I wouldn’t have changed a thing though cause I ended up being among the first 5 monkees there, and we exchanged stories, laughed, welcomed others as the masses grew, and ended up in line, right in front of family members that G grew up with, so we got the inside scoop as we waited!  Then when Bubba, Tisha, and Sister walked in, these were the first people they wanted to say ‘hi’ too, and since we’d become such close friends the first 5 of us got introduced to the FAM!  SO COOL!!!  I also managed to score prime location for the 5 minute speech she gave to the store… yes I recorded the entire thing…. too big to post though, so I’ll share it with you when I see ya! 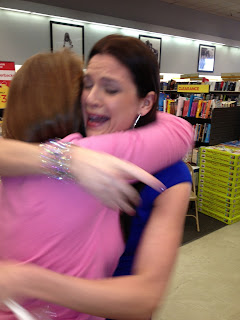 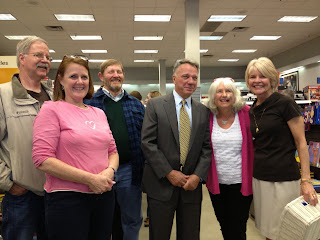 Friends of the Family behind us in line and Mama Tish on the Right
A GREAT Night!!!
PS: God orchestrated an awesome soundtrack for my ride home after meeting G!  First was “We Found Love in a Hopeless Place” and Second was the Mumford and Sons “Carry On”…. Carry On Warrior, in deed!