This summer will be our 7th year in the NOVA/DC Metropolitan area, and the amount of growth our family has seen here is immeasurable.  Our family grew from four to six.  Babies grew from helpless to  marginally helpful kids.  Our faith grew from a title we carried to a belief system that carried us.  When we moved up here, on paper it didn’t make sense, but it was a feeling we couldn’t ignore.  There was something more for us, a new adventure to start.  It was deep calling unto deep, something we wouldn’t be able to understand until we walked it out.  That feeling has started to resurface.  It’s been easier for me to ignore, from my insulated position.  I don’t deal with a commute and the vast majority of people I interact with are amazing, encouraging, joy filled, incredible people.  Kevin, on the other hand, has spent the last seven years in the car for 2+ hours a day, waking at ungodly hours in an attempt to minimize that commute, and dealing with people that seemingly wear their misery as a badge of honor they can’t wait to show off.

There is a part of me that defiantly wants to drive my stake into the ground and show this crazy frantic city just how counter culturally we can live.  I see your misery and raise you obnoxious JOY!  It sounds so subversive and delightful, and right up my alley.  Walking down the street smiling at everyone I see, stopping to talk, learning about their day, their life, paying them a compliment.  Smiling all the brighter at the person that sneers in my direction because my obnoxious joy is offensive to them.  It’s not my goal to offend anyone, but if joy is offensive, maybe they need exposure to it more often.  It’s something I’ve already been doing, it’s part of who I was created to be.  I can feel a calling toward ministering to the prevailing misery.  Helping families find the balance between frantic and fun, careers vs. callings, releasing people to follow dreams that seemingly once brought them to this city, but have left them disappointed and disillusioned.  There is purpose there, I feel it tempting me to take a stand for all these hurting people, to set up shop for the duration.

The temptation exists to stand for something significant, to be our own judges of significance, measuring in what we can immediately see, feel, or impact.   The thinking goes that if we can save 5, 50, 500, etc.. families, than sacrificing a few relationships along the way is a worthy cost.  Except, by my understanding there was one final sacrifice made for all. One.  For All.  My take-away from that is never again should we have to sacrifice people we love in service of people we don’t yet know.  God has a plan for them, as much as He has one for me and my family, and you and yours.  In my opinion, its equally as subversive to stare the temptations of religion in the face, tempting you to stand up for something big, and say you ARE standing up for something big.  You.  Your Family. Your Joy.  Believing full of faith, that in doing so you are releasing something more powerful into the world than your stand or service could ever do, you release freedom.

Even more temptations surface that make me think we can’t possibly leave our incredible community here, because it will mean starting over.   That lovely experience when you walk into a new church and are promptly swarmed by well meaning individuals hoping and praying you’ll be the +1 to their salvation number for the week.  It almost feels like a disappointment to already believe, like you’re letting them down somehow.  Navigating that awkward minefield that is Christiandom, with grace and humility that seems to automatically require at least 5 years in any new ‘group’.  Go in too zealous, you’re the crazy one.  Play it slow and you might only be ‘luke warm’, requiring some ministry.  Step on so and so’s toes whose been running their team for decades and is related to so and so in such and such high place, and you might as well be sent from the devil himself trying to stir up such discord.  I still have issues with how church plays out in the grand scheme of things, even though I’m completely on board with the heart behind it.

Yes, my temptation is to stay. This is the place I had my ‘ah ha’ moment, where God moved from a religious name sake to the Father figure He was meant to play.  There is fear that leaving this place will result in me losing the first version of myself I’ve ever even liked.  BUT as I said in my last post, fear is no longer the boss of me, and temptation won’t be either.  I am His.  No matter where we live, that truth will remain. I am forever changed because of my ah ha moment, and now I want to facilitate Kevin’s.

Don’t get me wrong, my man believes all of it, that’s not the struggle…. but men these days…. I feel like we broke something somewhere awhile back, corporately.  I can’t put my finger on it exactly, but somewhere along the way as woman started redefining our own identities, it seems we may have inadvertently pulled the rug out from under theirs.  I’m not suggesting we turn the clock back, nope, I’m quite content exercising my voice, clearly.  However,  I want to slow myself down long enough to think through the ramifications of ‘running my own race’.  I’m a mover and a shaker, it’s true.  “High Capacity” has been a word others have used to describe me… I prefer hot mess, but theirs sounds better so sure.  I like to make decisions and get things done.  I could absolutely find a house in this area, and get my entire family on board with the idea, and I would make it work…… BUT…. God is calling me to trust Him…. again…..  (I really thought me being obedient to step out and try home school was a big enough test, but apparently I was wrong.)

He has something for Kevin.  He’s not cluing me in to what that is, because rude.  He says its because its not my thing, but ofcourse I like to make ALL things my thing.  I’ve decided its because my man is amazing, and is destined to be an incredible leader of life in general and we’ll be doing crazy fun ministry/world changing things together side by side someday.  WHATEVER it is, my role was clear, I am to support whatever he chooses.  I am to constantly remind him that he leads well, that he chooses well, and to trust where ever that takes us.

We drove down to North Carolina recently to ‘check things out’.  Kevin has a regional office down there with his current company he could relocate to.  Part of me was hoping, unrealistic as it was, that we’d get down there and the traffic, people, housing, etc… would be every bit as crazed as this area.  It wasn’t.  The landscape was gorgeous, kids were playing in the neighborhoods, which we know is a huge deal for me and my irritation over the fact there are NEVER any kids outside to play with mine here.  Houses were affordable and beautiful, it was peaceful.   Michigan still holds both sides of our extended families.  The weather there leaves MUCH to be desired for me, but again housing is affordable and there are experiences, traditions, and relationships that can be nurtured as well.  We still have our home in Texas, and MAN would that be cheap livin, along with community we left behind there seven years ago.  If God wants us to stay here, we haven’t closed the door on that option, but have asked that He make it unmistakably obvious.  If we can find a home that would allow me the option to stop working as the kids continue to grow and their schooling requires more of my time, and is big enough to fit us (as my kids will undoubtedly all grow to be over 6ft), that would TRULY be a miracle!

Pray for us if you think about it.  Pray for Kevin to have the clarity and confidence, to know God is speaking directly to him, leading and guiding our family to the neighborhood He’s chosen for us.  Pray for me, it’s not easy for Type A control freaks to sit back and wait, trusting everything to work out.  I know that I know that this is my role, but pray that His grace sustains me however long that takes.  Pray for his ah ha moment.  Mine came on the heals of the absolute HARDEST thing I’ve ever had to do, and it was scary, painful, and messy….. As beautiful as the ah ha was, I’m believing there can be a less painful means to that end.

Seven years ago, these four babies made a move that changed their lives…. It’s been a FABULOUS seven years, and I can’t wait to see where God takes the six of us next! 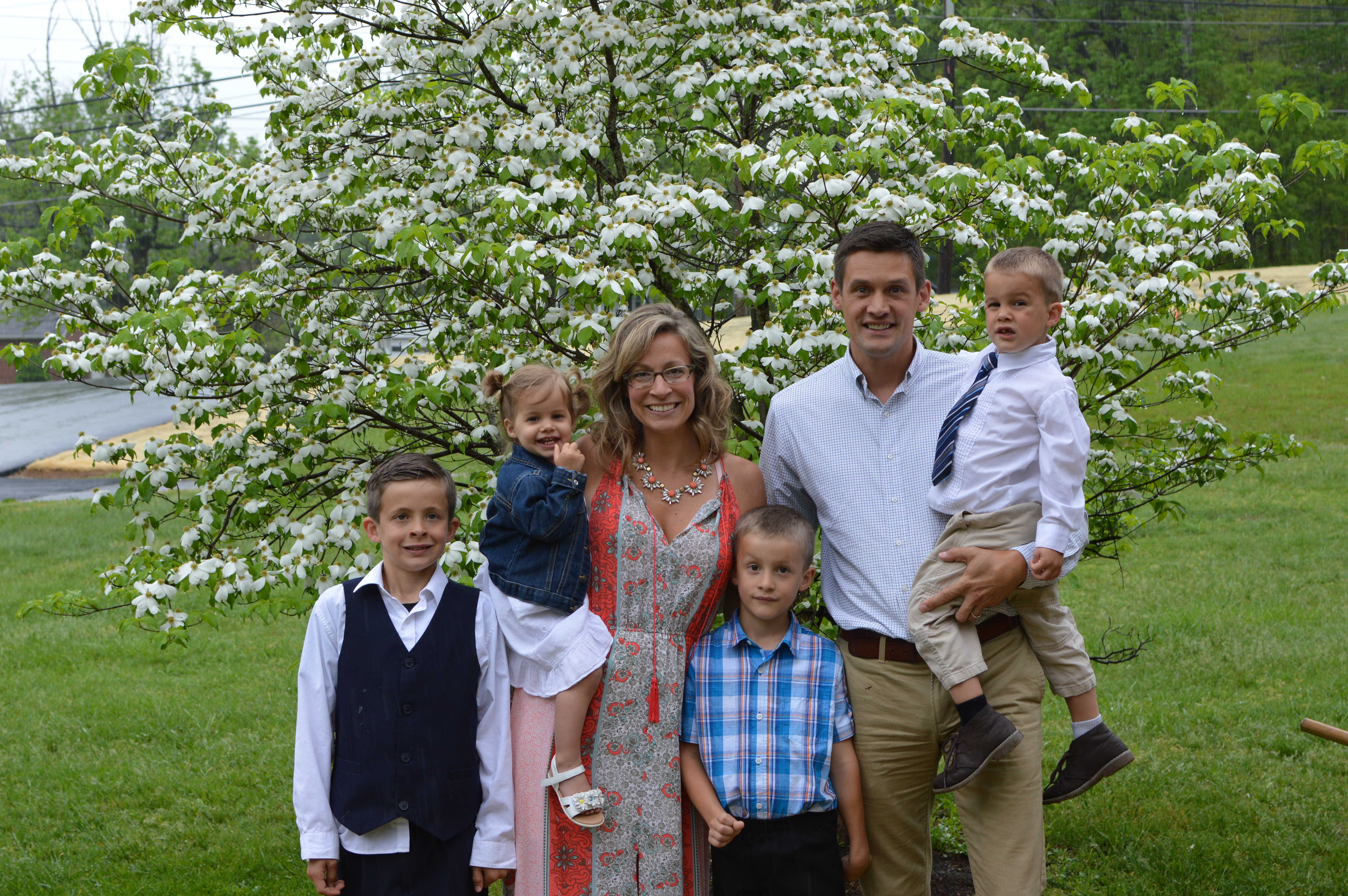 P.S…. I’m not sure how Kevin actually looks YOUNGER to me in the second picture, if not at minimum EXACTLY the same…. So not fair!

P.P.S… Logan is in the running for any Forest Gump squeal, give that boy a box of chocolates and we’ve nailed it!

P.P.P.S…. This was Caleb’s best shot in a series of roughly seven pictures.  Kevin and I have laughed so hard over them, convinced he’s working out some intestinal issues on camera. (I live with three young boys, and Kevin…. ALL of our humor seems to circle around intestinal issues).