Life has been pretty busy around here lately…. which in less than a month will probably seem like a dramatic understatement, as we attempt to renegotiate life as a family of SIX?!?  However, in the three short weeks since I last posted, Easter came and went, which was particularly momentous for our little family due to Caleb decision to be baptized at the Good Friday service! 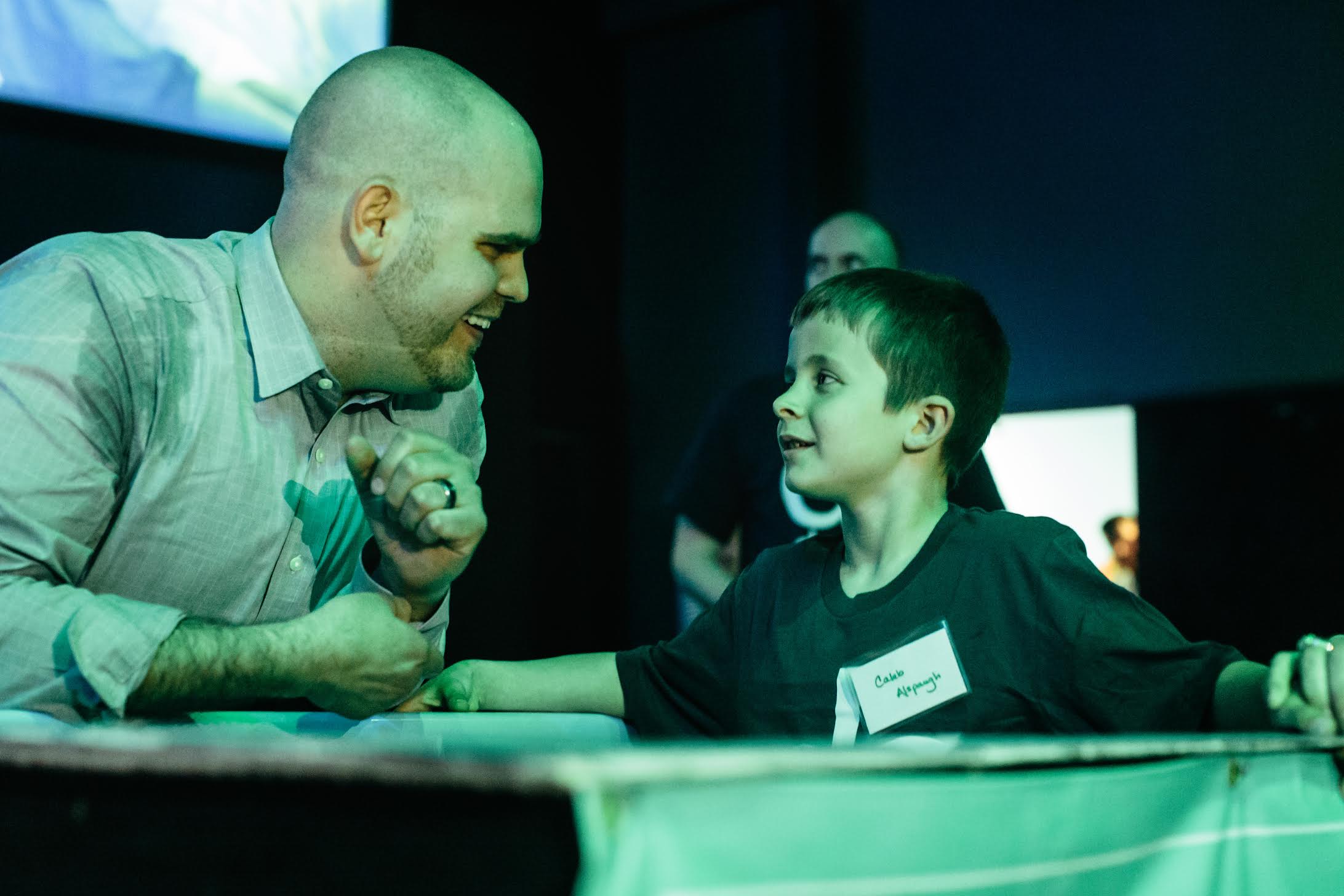 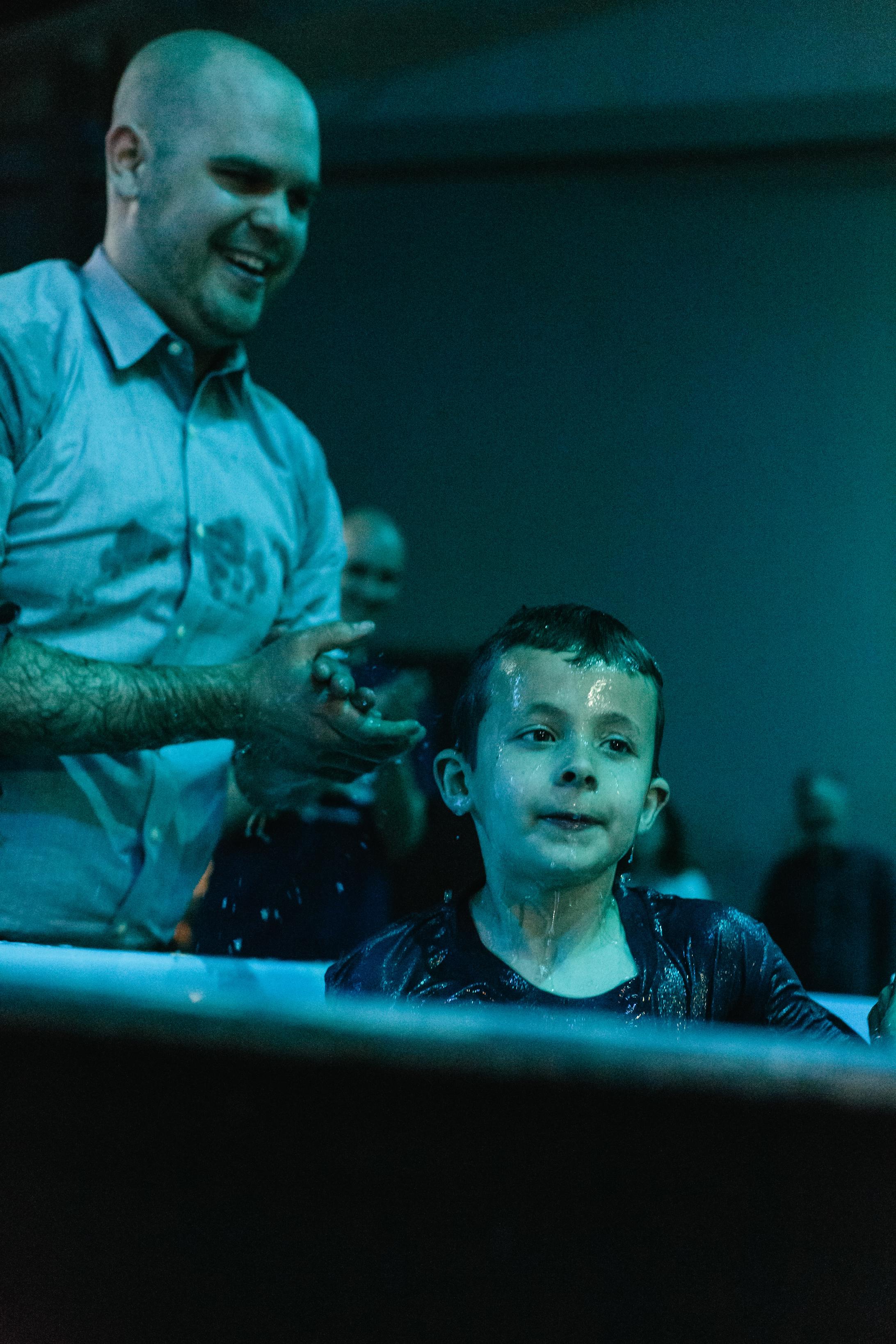 I could write an entire post simply about this.  I’ve thought about it…. and might do it later at some point.  However, today… right now…. I just want to get an update out there on ALL that we’ve been up too, before there is just TOO much more to add.   Suffice it to say…. for a mama that normally doesn’t shed a tear for much, there were tears.  It was too precious and my heart and mind simply couldn’t comprehend how he is HERE already, making such mature, life changing decisions on his own.  How can he come up to his mama at almost 7, and confess with palpable sincerity a deep love and devotion to a Savior that it took his own mama 2 additional DECADES to figure out?!?  I will have to spend time noodling that one before I can find the words to figure it out, cause it still leaves me speechless.

But…. despite my speechlessness…. life keeps right on a truckin!

The week after Easter marked my 33rd birthday, and the boys decided to gift me with a nasty cold, so I spent much of the day in bed :/  Not exactly how I imagined my day would go…. BUT it wasn’t the only gift I got, and my real present brought a huge smile to my face as I’ve been wanting to capture great pictures for a few years, and NOW I finally can!!! 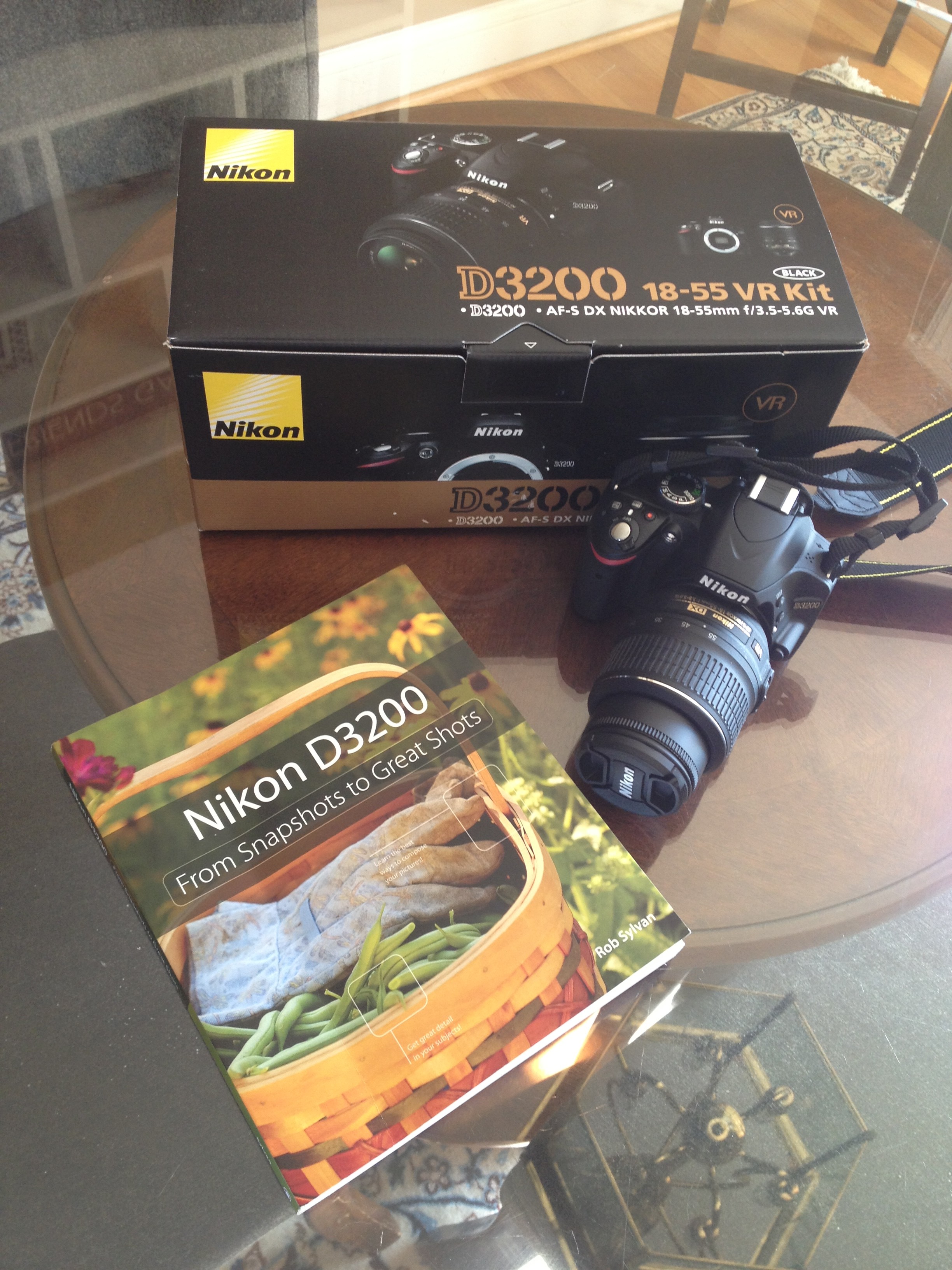 Be prepared to have your mind blown with amazing pictures on my blog in the near future!  Well, ‘near’ could be relative… ya’ know, after I have a baby and figure life out again and stuff!

With our vacation to Hilton Head, SC planned for the week after my birthday, I simply declared a ‘re-do’ on my actual birthday, and decided the entire following week would be a sufficient make-up.  However, I was SERIOUSLY nervous, borderline depressed, as I watched the forecast for our week of vacation unfold…. EVERY. SINGLE. DAY. was rain and/or thunderstorms.  The boys had been praying for great weather since basically the day after Christmas, and we’d pulled in our vacation by a few weeks to accommodate the impending arrival of little miss, so it was a major bummer to see an outlook for so much rain.  THANKFULLY, the boys prayers worked! (Which is a miracle in itself, because I had NO idea how I was going to explain to them a week of straight rain, despite 4 months of them praying for good weather.)

Again…. I could write an entire post just about all the fun we had on vacay, and I still might because I have lots of fun pictures I took with my new camera that I want to share!  For now, though, you can see the highlights from the pics I snapped on my cell-phone 🙂 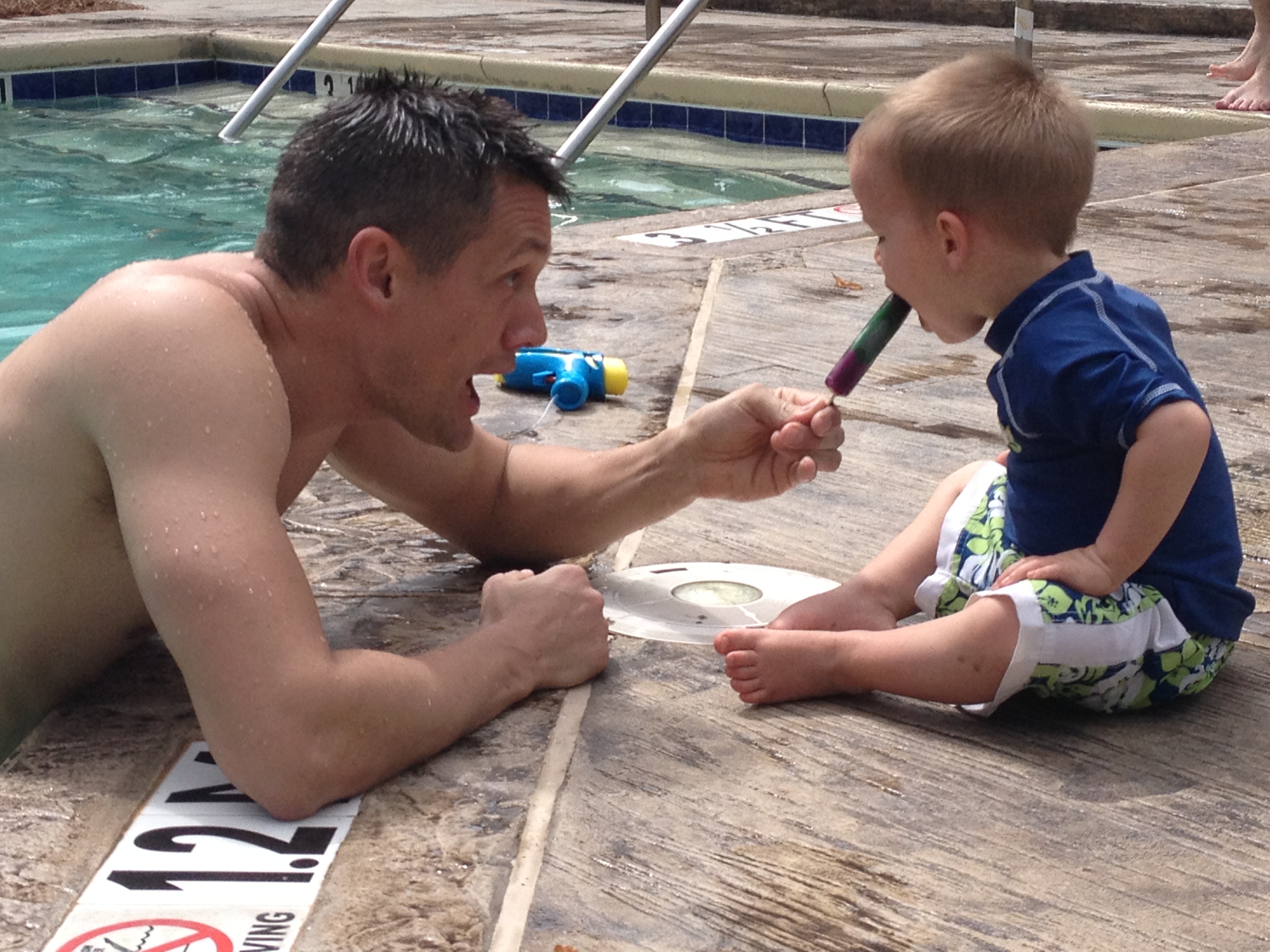 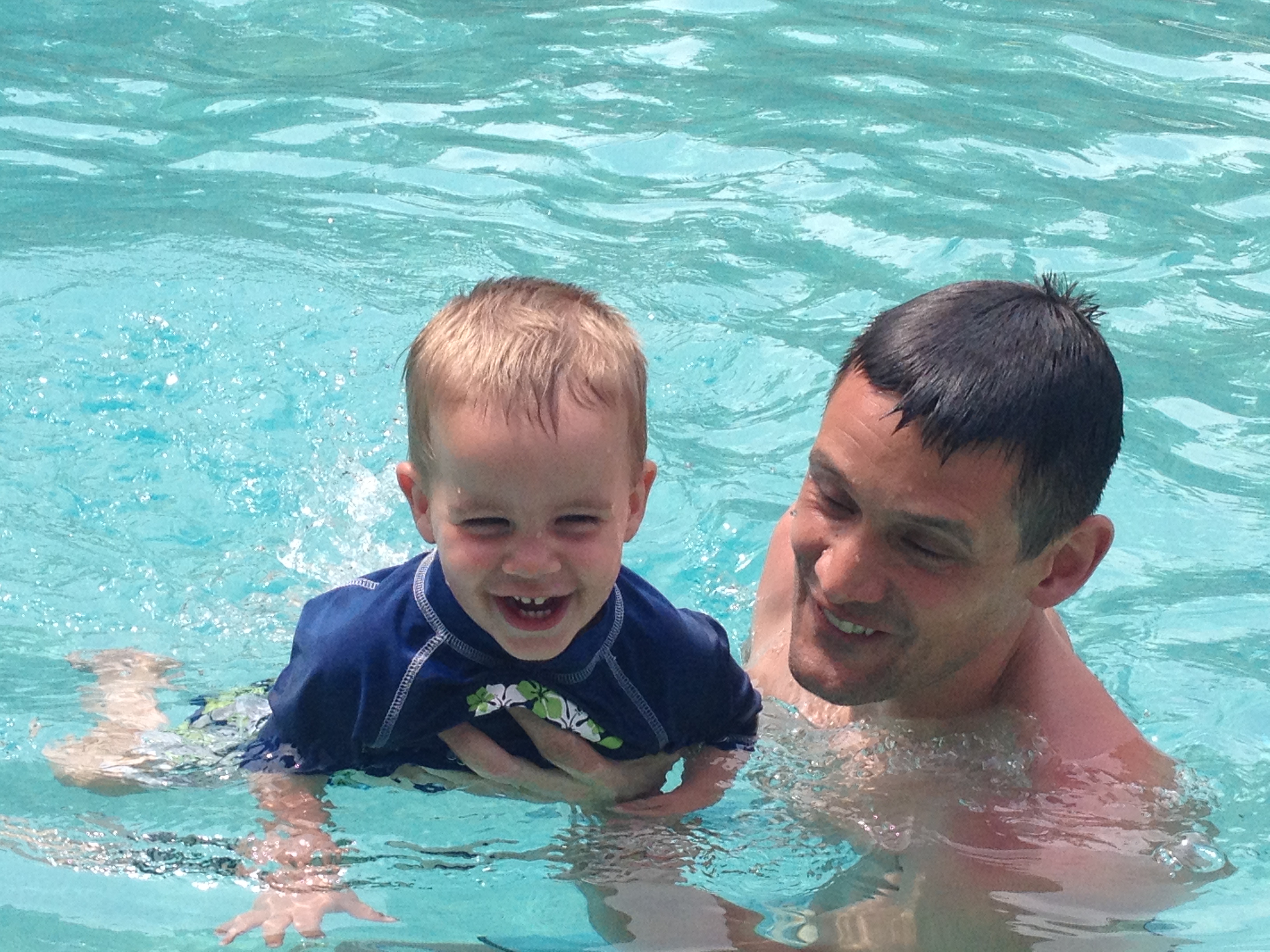 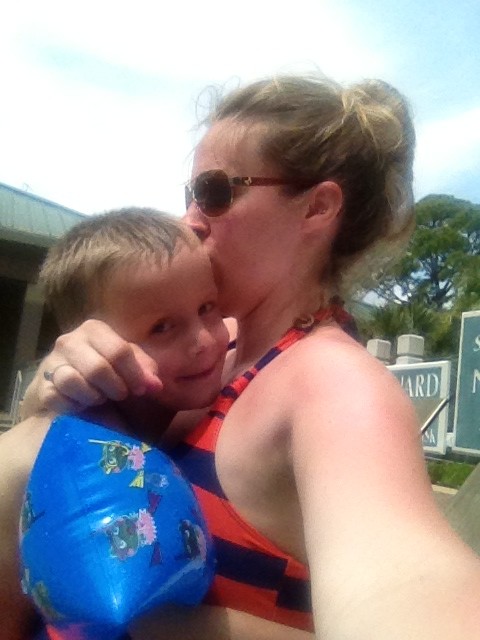 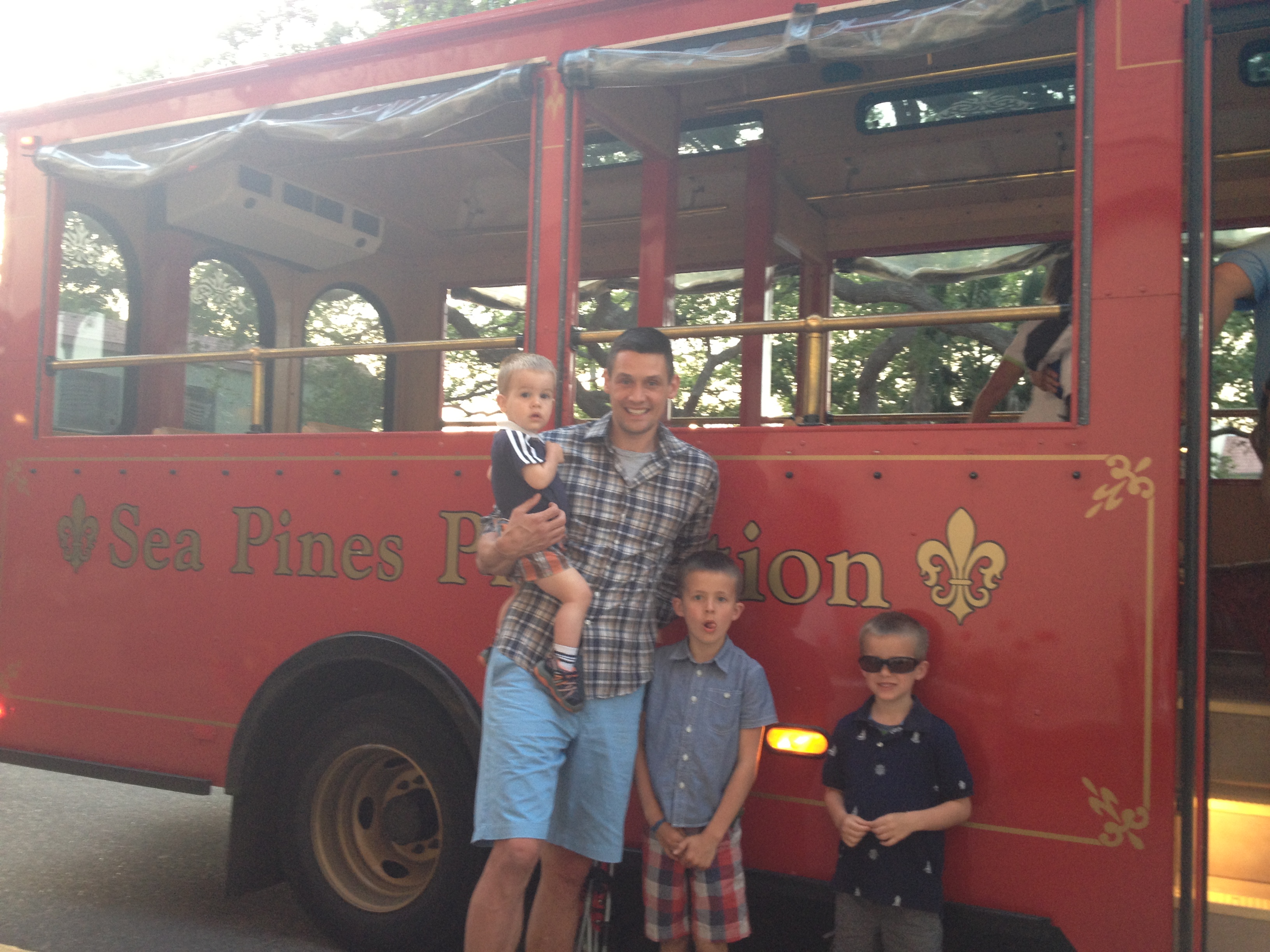 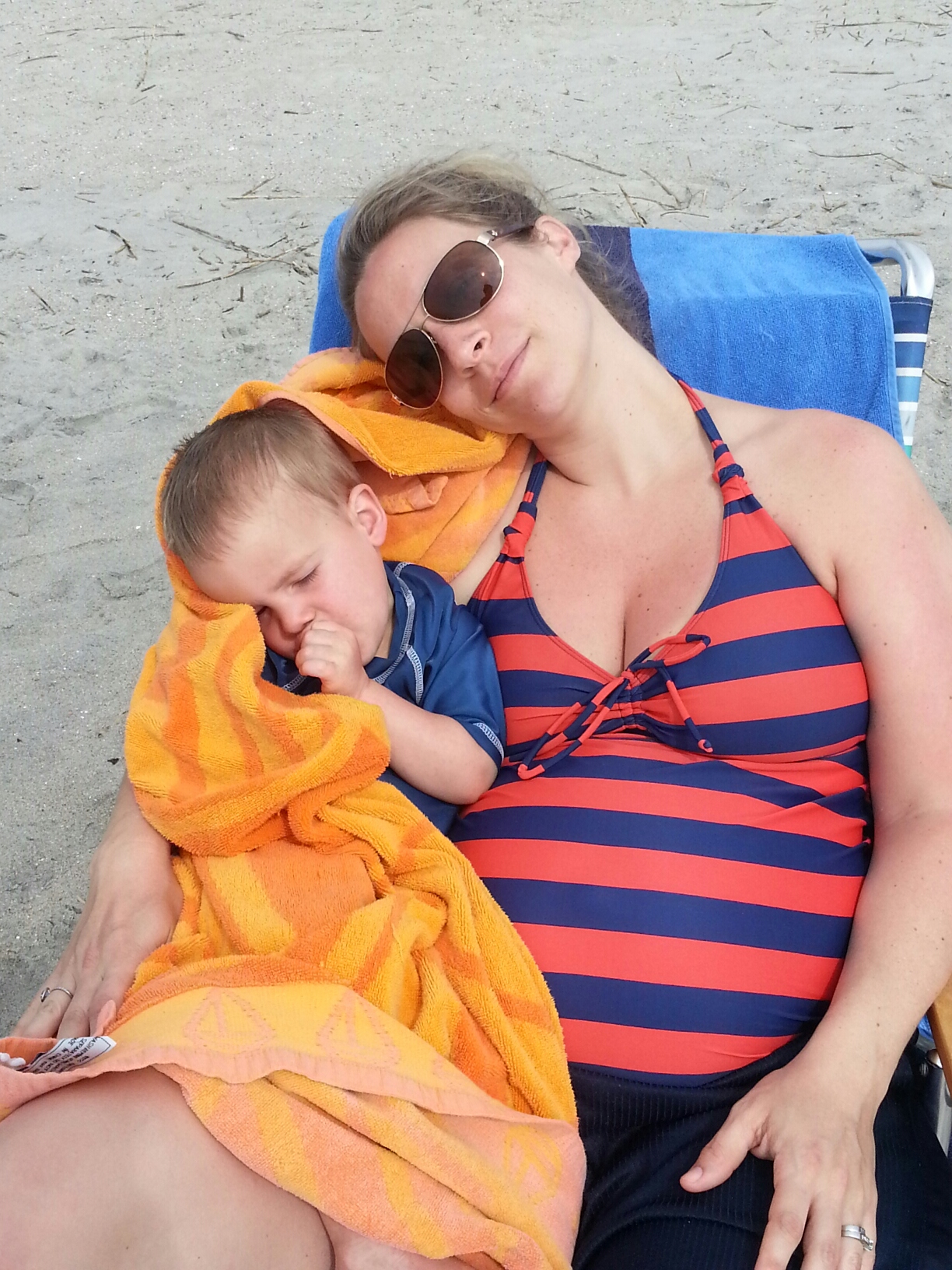 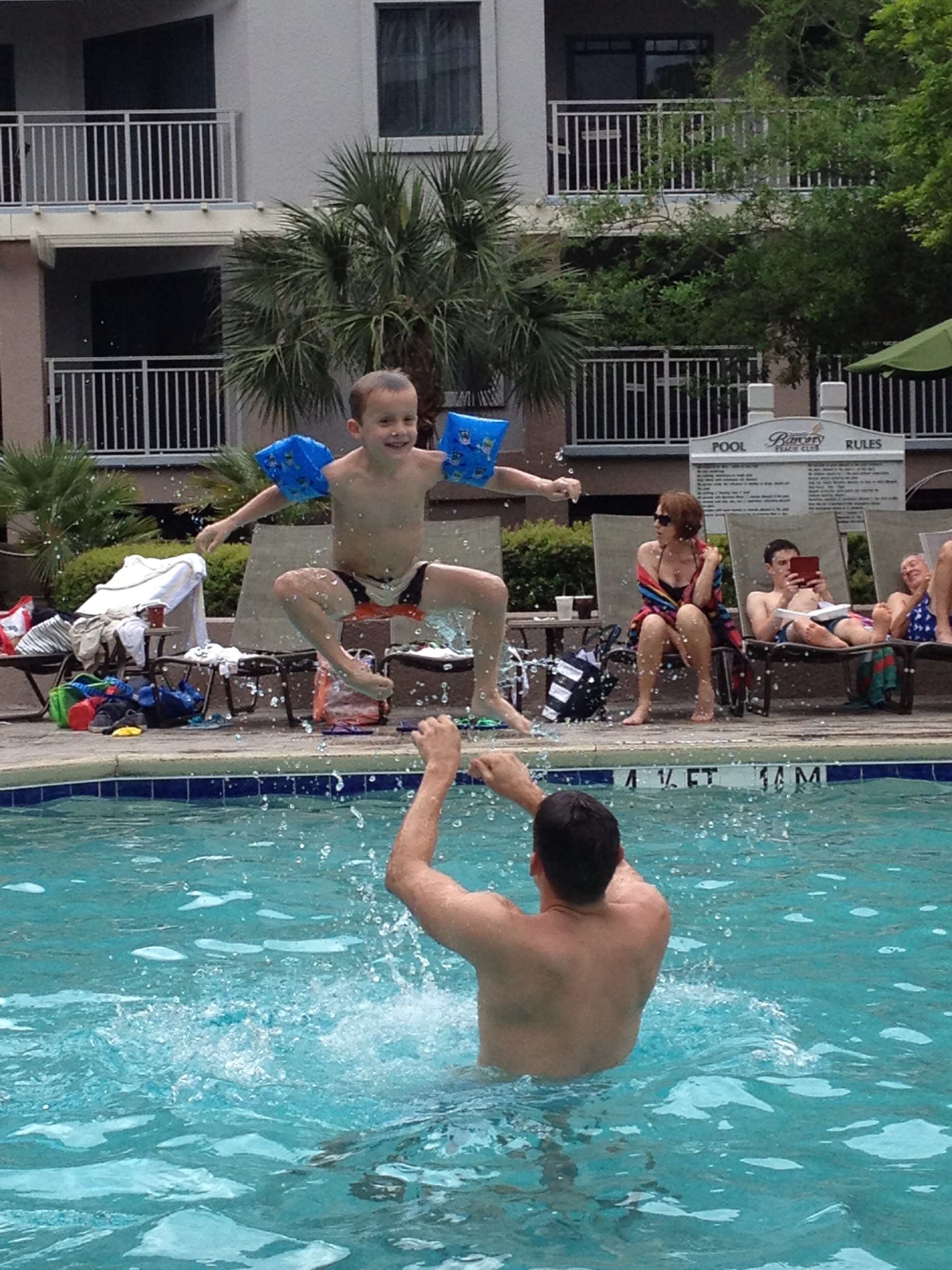 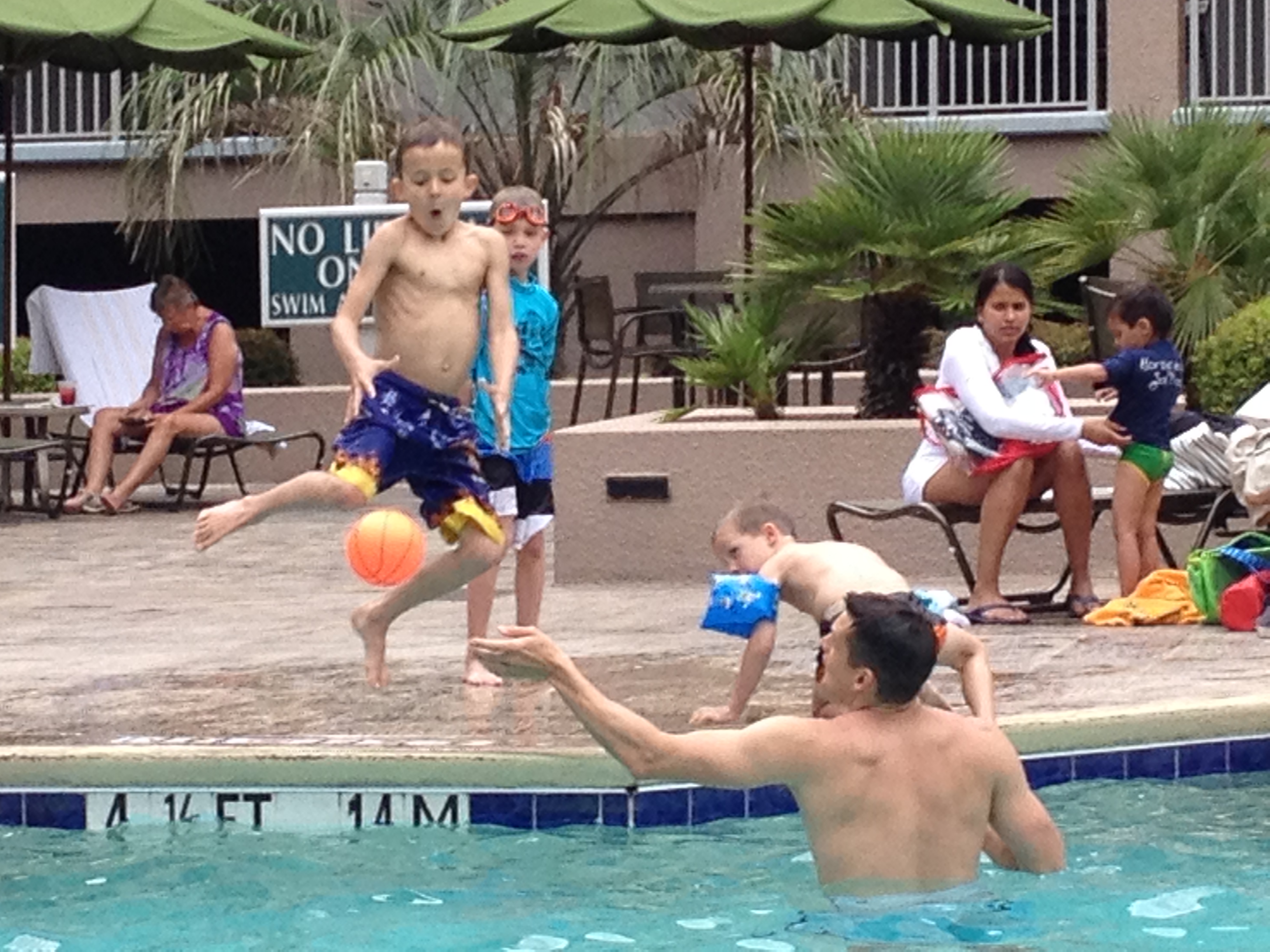 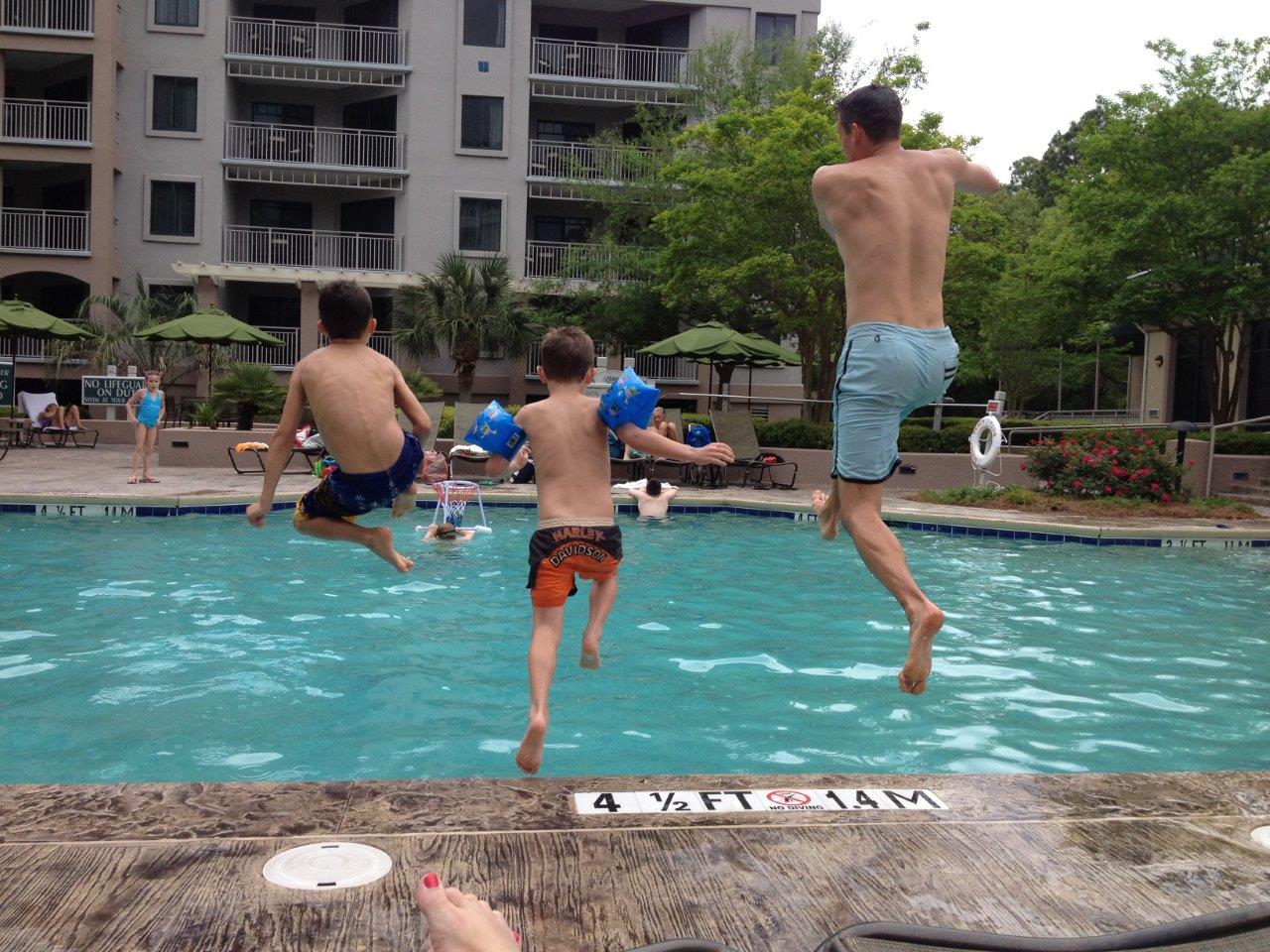 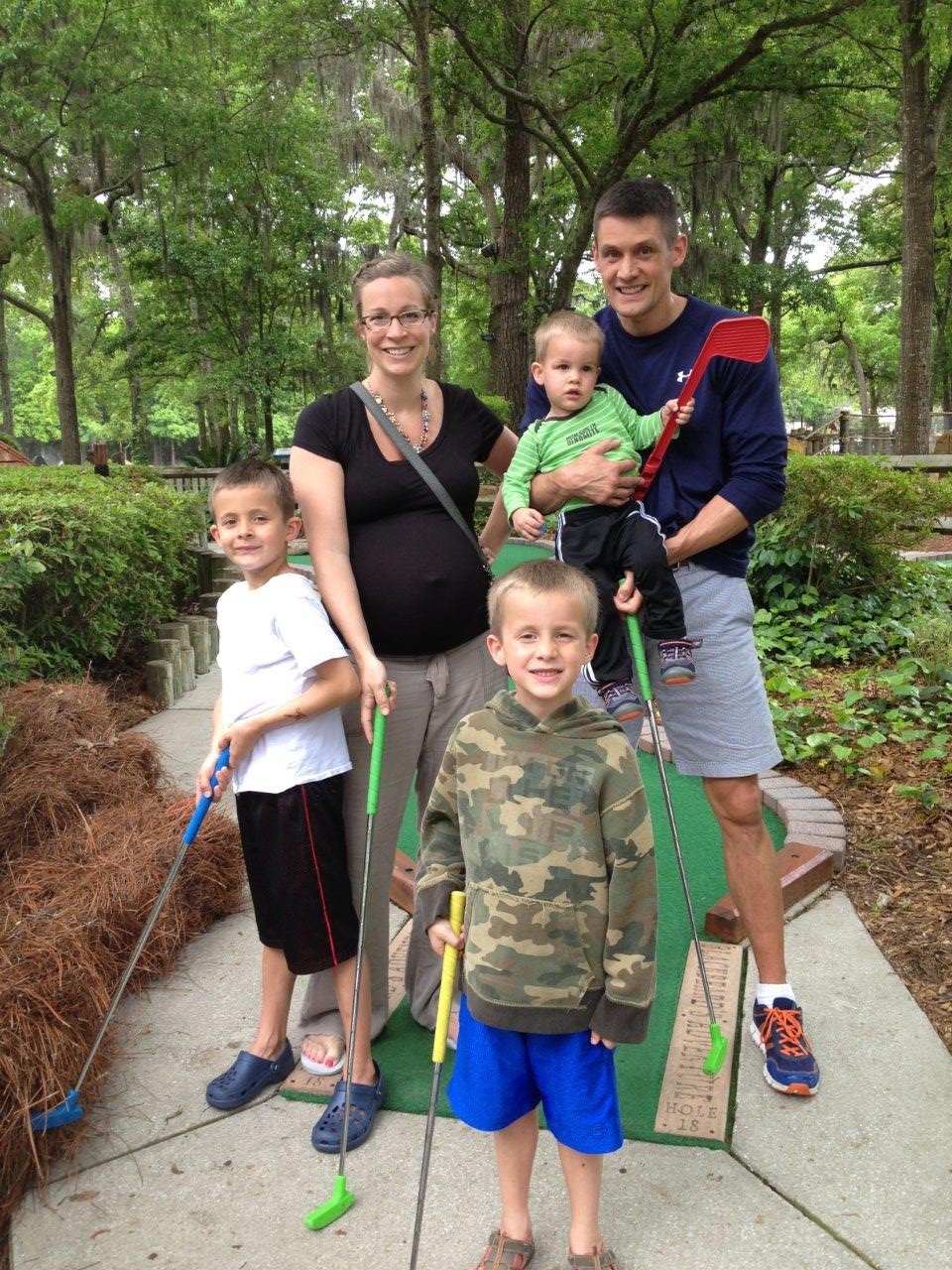 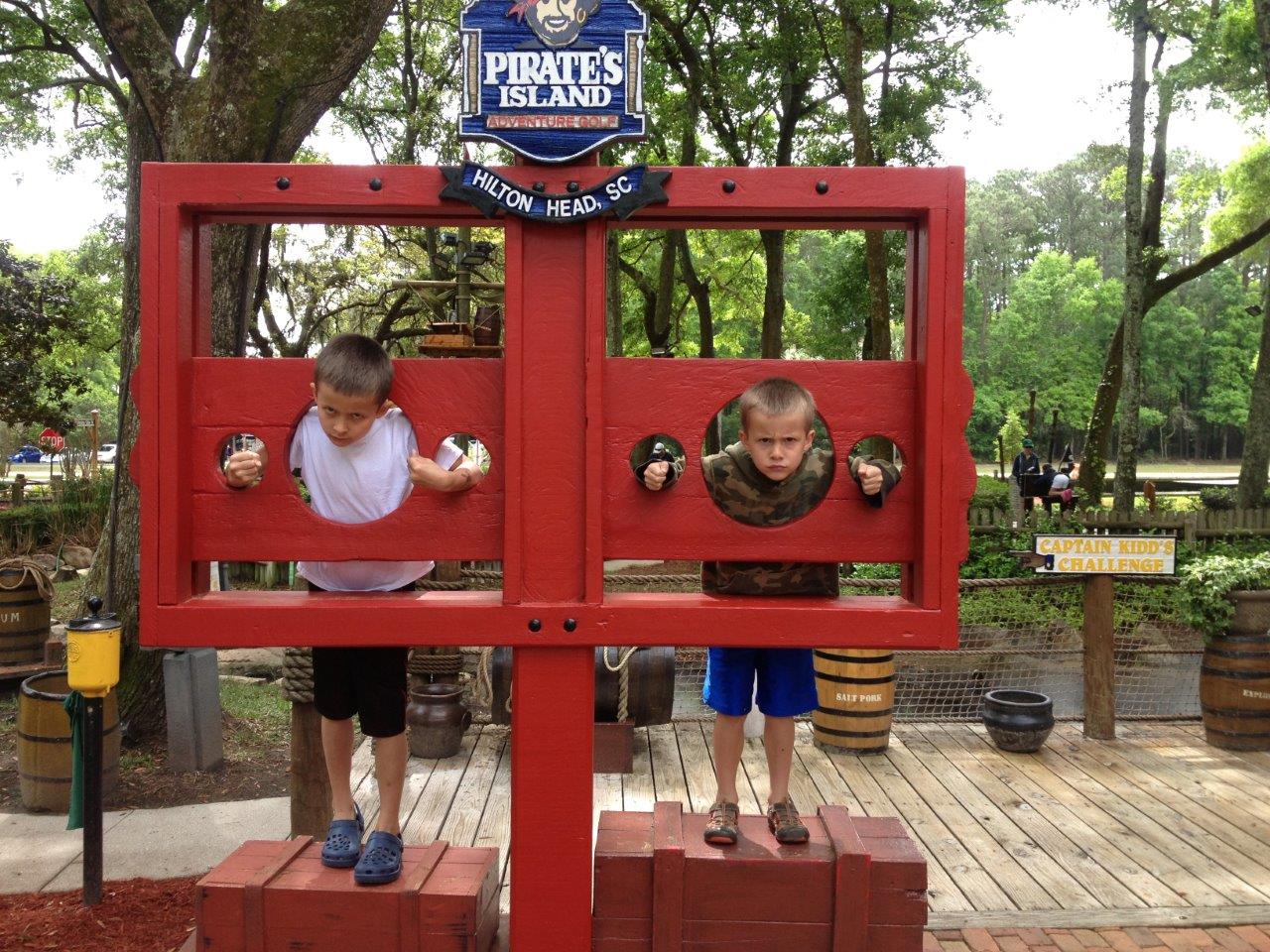 It was an INCREDIBLE week!  Clearly the forecast was blown, and we had some great weather, but what was even better was the chance to reconnect with some awesome friends from Texas that made the trek to join us on vacation! When I get the chance to post pics I took with my new camera, you’ll be able to see Casey and Emily and their son Wyatt.  The boys all had a BLAST together…. ALL of the boys 🙂  It was so fun seeing Kevin and Casey banter like they did when they were going through classes at UT together…. two peas from the same pod!  What was even more fun for me was the surprise news that I wouldn’t be the only preggo on vacay, and me and Emily got to relax and be pampered by our men and indulge in all the ice cream we could get our hands on!

So how did two families fit into one condo???? Quite well actually!  We all had our own beds, and AJ even got his own room….. It was pitch black, with a built in ‘white noise’ machine to help him sleep each night…. Didn’t provide the best view, but at one years old, we didn’t hear much complaining! 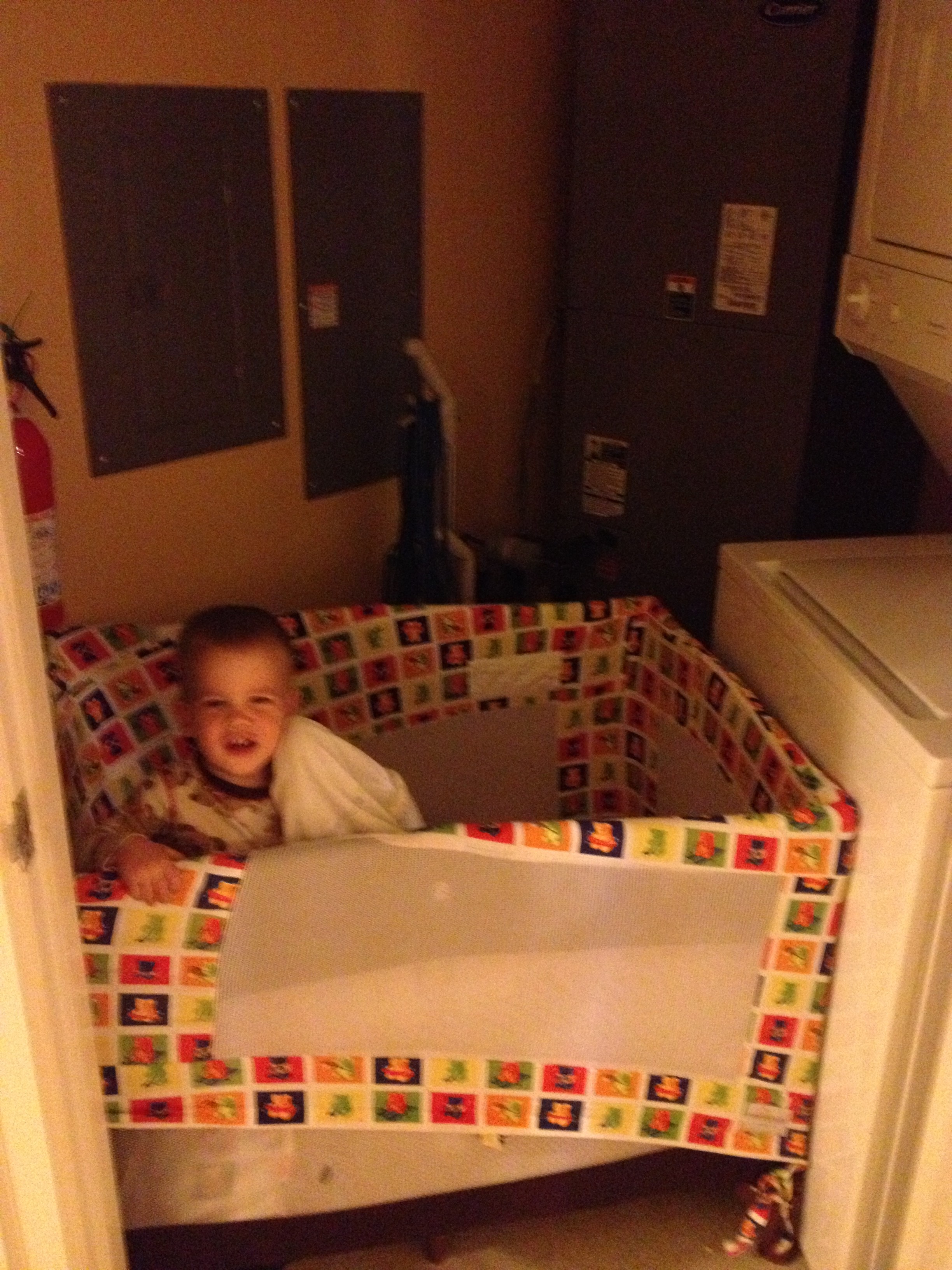 As you can see its been a FULL three weeks!  As much as I would like to dedicate time to crafting a fun post for each of these incredible events… my options come down to writing about my life, or spending time living it…. Case in point, last night…. I COULD have stayed home and written two separate posts, but then I would have missed out on dinner with these fabulous women! 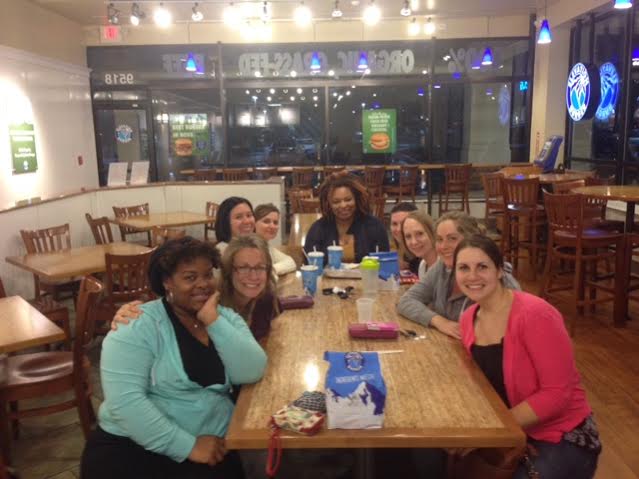 With 20 kids between the 9 of us, its an all out miracle to have 2.5 hours of uninterrupted talk time…. Throw in milk shakes, and its basically heaven on Earth.  So clearly I made the better choice in cramming ALL these updates into one ridiculously long post!  It’s a miracle I’m even posting anything, because the Monday morning after a week of vacation, reminds me VERY closely of attempting to land a plane with faulty landing gear.  It’s ALL smooth sailing and blue skys while in flight on vacation…. Then Monday morning rolls around and the WHEELS START COMING OFF?!?

755 work emails greeted me this morning and attempting to explain what the END of vacation means to small children is next to impossible…..  “I know you got fruit snacks a lot last week…. I know either daddy or myself entertained you for most of the hours of everyday last week…. I know you got to watch more movies than normal, and we had SO. MUCH. FUN….. but now I need you to clean, and unpack, and eat vegetables again, and remember that mommy does still have a job that is rather demanding today as I answer 11dy billion questions that held while I was out last week…. oh and if you could read something to jump start your brain again, that would be awesome.”    That concept is not going over super well today.  I also forgot my birth assistant was coming to my house for an appointment I’d scheduled the week before vacay , so that clearly went super well when I answered the door without a bra, or my teeth brushed, and my house in total post vacation disarray and children running all sorts of amok, and my work I.M. blowing up with questions…..  Thankfully, you get a LOT of extra grace with mid-wives that manage home-births as their job…. I swear, they are just used to absolute CHAOS and moms with 17 children hanging off them, so she just smiled and talked over my chaos for our little meeting.

So there ya’ have it…. Here we are…. 37wks preggers and using nap time for lil man and a beautiful day to occupy the boys, and I’m putting the wheels back on my day!  Things only keep moving from here, so I had to take the time where I could find it!  We’ve got a family of five bunking with us for the weekend, a memorial for an incredible woman that taken WAY too early on Saturday, and my sweet friends wanted to celebrate little Miss Alspaugh with a shower on Sunday.   One of these days I’ll get back to documenting life, when I can hit one event at a time, but you won’t find me complaining about having so much life to live that documenting it needs to take a back seat for awhile!  Hope you feel caught up!  Love you!!!