There’s a risk I take in publishing this blog, that those who know and love me, will under their breath call me a Bitch, or issue some other curse in my direction… and I can’t say I would blame them. I’ve done it… but generally my insults were hurled in the direction of the sickly svelte super model-esque woman that claimed to have bore a child a week or two ago… I’m waiting to be THAT lucky, but for now, I’m certainly not looking my gift horse in the mouth!

One push. That’s right, it only took one… and yes, I’m bragging just a little bit, and sure its not one of the ‘good attributes’ in people… but after putting in my 9 months and bringing an almost 9lb child into this world, I think I’m entitled to one little blog bragging about ONE PUSH ;)!!!

So those that have SOMEHOW stumbled across my blog, have likely also found or been privy to my ‘post labor’ pictures showing off Logan and the new “Fam of Four”(if you haven’t, leave a comment, cause I’d love to know if someone is actually ‘following’ me, that I don’t know ;)… So I will now attempt to explain the story that lead to “the hair” and my infamous ONE PUSH.

Well, it all started about 9 months ago… it was this ONE night…. HA… just kidding, those details are classified!

Starting a little closer to due date, its important to note, that I was under strict lock down, to hold Jr. inside until after Kev’s Graduation AND until after my mom arrived. After, what felt like, an eternity passed, those days came and went… I thought for sure 24 hours after my mom landed I would pop the little bugger out…. much to my dismay, that didn’t happen.

For the next 6 days, in the 90 degree Texas heat, we WALKED, Shopped, walked, tried the hibbity… multiple times, tried red wine, tried the pressure points, TRIED EVERYTHING… by my 40 week doc check up, on June 1st, I was a woman on a mission… I told the doc to “do what you can” to get me going, then after leaving the doc’s office at 9am, I cleaned the entire house, walked for a couple hours around the mall, and refused to sit down… even through dinner! I started feeling the little dinky contractions, but didn’t want to get my hopes up as I had felt those plenty of times… so I didn’t say anything… about 3 hours into those, I finally told Kevin and my mom.

Kevin: “Why don’t you just relax and sit down, its nothing, you’re just getting yourself all worked up”….. MEN… I swear… YOU calm down and relax with an 8+ pound child you want OUT of you! 😉

Mom: “Really… Really… you think?… Really???” (followed by all sorts of motherly like excitement that is really difficult to describe… all the gushy faces and super excitedness) She then proceeded to start walking right behind me for my laps around the kitchen for the next hour… God love her 😉 I was telling her to cool it, she was putting too much pressure on me to make sure ‘this was IT’.

Renee, who would be watching Caleb while we went to the hospital, made it to our house and I made the executive call it was better to check it out, than wait till 3am when I had to wake everyone up (it was now 10pm at night). I still wasn’t convinced this was the real deal when we made it to the hospital, as I was cracking jokes and not showing any signs of labor. After getting there my ‘power hour’ started…. The ONE HOUR you get to prove to the nurses your making progress and they shouldn’t send you home…. So what did I do… Lied ofcourse 🙂

Nurse: “How many centimeters were you this morning”
Julie: “a little over 3” (Truth = 4)
Nurse: “Well, we’ll check you again in an hour and see if you’ve made any progress”

Over the next hour I forced my mom and Kevin to accompany me for a 3 mile (I’m not kidding) power walk around the hospital, complete with squats and lunges interspersed for good measure… I wasn’t messing around! The result…. VINDICATION… I was admitted! I told the troops we could then celebrate and we started playing cards (all the while still having my contractions now 3-5 mins apart, and now closing in on the midnight hour). After a great game of cards, I decided it was time to ‘get ready’, and proceeded to hot roll my hair for the post labor pic’s… Judge me if you will, but at least I can look back at this labor and see the cute newborn in the pic instead of the hideous version of myself that just gave birth to it!

Hot rollers in and setting, I decided at ~2:30 am that if I was going to get ANY sleep, I should probably elect for the epidural before things really started to hurt… little did I know that 2.5 hours later my little man would be here! 4:15 my water broke… 4:45 the nurse came in and asked I give a ‘practice’ push to give her an idea when to call the doc… after I essentially breathed in/out, she yelled for me to stop and promptly called the doc… 4:55 the troops roll in, I get the go ahead for the next contraction to push, and bada bing, bada boom out pops Jr!

Now two weeks removed from the blessed event, and hindsight being 20/20… I TOTALLY should have ‘faked’ some more pain and pushes to get a little empathy from the hubs ;)… He views labor now as no big deal… uh hello, 9 months before, and a lifetime after… but yeah, lets focus on 5 minutes! He’s been fantastic though, and the quick/seamless delivery has allowed for a fairly quick/seamless recovery, so for that I’m very thankful.

To any/all the ladies reading this, damning me to Hell… I would say I’m sorry… but I’m not… so how about I just say, I’ll pray it happens like this for you next time…. and we can ALL keep praying we turn into the skinny svelte super models in the week post baby! 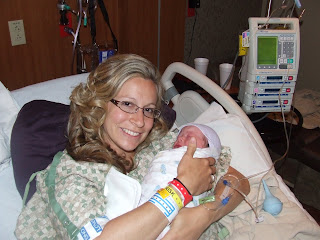 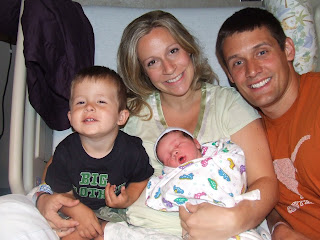