Our day’s are pretty standard.  However, it never ceases to amaze me the massive gap that exists between what people think happens in a home during the day, and what actually occurs.  So I figured I’d write out one of our days, for the fun of it.

Everyone is up by 6:15, and after feeding Selah, I crawl back into bed in denial that the day has already started.  AJ appears in my doorway about 5 minutes later, with the usual ‘Daddy?’, and our game starts where I respond he’s at work, AJ asks again, I say the same thing in response, and after two or three more rounds he tires of the same question.  I remind him his choice is to play down stairs with his brothers until 7a, or snuggle with me quietly.  He doesn’t move.  He starts his campaign for an early breakfast.  I remind him that’s not a choice, and try to shoo him down stairs.  He says he wants to snuggle, and as soon as I pick him up, he screams “NO!  Downstairs”.   He doesn’t go, and finally crawls into my bed quietly, but hears Selah talking, so proceeds to tell me Selah is awake until I relent and go and get her.

Everyone fights over breakfast, but I’m still not with it enough to care.  They fight over who has more in their bowl.  Who got the last bowl of what.  AJ asked for yogurt and crunchies (Granola), but as soon as it was set in front of him, he realized OFCOURSE he had REALLY wanted oatmeal.  This will last for about an hour and a half, while I remind him he get’s nothing until what’s in front of him is gone.  The bigs wolf down their food, and then begin the first game of the day, which generally makes an enormous mess of my living room without me really understanding what the game is.  I think it’s just ‘get everything out’.

At 8a the school day starts.  The start has been 8a since the beginning of September, but here we are at the start of March, and still at 8 they are shocked I’m asking them to get books out.  The gnashing of teeth begins.  Selah has been fairly independent at this point for close to 2 hours, and the hour slide until nap time begins where she really isn’t happy unless she’s being held with her blanket to snuggle.  However AJ is trying to use the potty now, so for about 15 minutes every half hour or so, he holds me hostage in the bathroom trying to earn chocolate chips by making #2 on the potty.  If I walk out, he only calls my name until I come back, so by about 10am every morning I give up and put a diaper back on him for the day.  Eventually every one get’s it, and ain’t nobody got time for hostage negotiations over poop.

It’s 10.  Selah lays down.  Breakfast is over but the mess of spilt milk, cereal, dishes, etc remain, and now books cover the kitchen table.  My living room is destroyed, and I’m still in my pajama’s, hair askew, teeth unbrushed, head spinning with what to do next.   I check work to make sure I’m not missing a question, or if a conference call has been added, then start cleaning up the kitchen.  Something about a clean kitchen, is always my first step towards restoring order.  I get pulled out about every 5 minutes for a question.  Logan is close to finished with his daily work; math, journal writing, spelling, and cursive.  Caleb launches into a diatribe about how unfair life is because Logan’s work is so much easier.  I remind him, again, that he did the same work 2 years ago, at Logan’s age.  It falls on deaf ears.  Logan finishes and runs off with AJ to play (AKA: Make a mess of another room).

I set a timer for Caleb to try and help him focus.  He complains about the timer.  He stares of into the distance.  He asks me 50 zillion questions.  There is a squirrel outside.  Why is the snow melting so fast?  What is Daddy doing right now?  Can we call him?  His leg hurts.  Does he have something in his eye?   I remind him the timer is running, and if he doesn’t finish he will be forfeiting his play time later that afternoon.  He finishes his homework with seconds to go, and I remind him there is a consequence he earned from writing a nasty letter to our new baby sitter.  He has to write a nice letter, one journal page (10 lines).  Its 11am, when I send him downstairs to work on it.

Selah wakes up.  She bounces next to me while I respond to a few emails, then I sweep up all the Cheerios, raisins, and dust that has accumulated since after dinner last night.  I fill up a dustpan.  This disgusts me, every time.  I finally get the kitchen clean around 11:30, just as Logan and AJ ask for me to start making lunch.  I make some PB &J’s, and Caleb starts calling out from the basement about how mean I am, and how hungry he is.  I remind him he has to finish before he get’s lunch.  He smarts off, and earns himself 5 extra lines.  More crying and gnashing of teeth.   He comes up 15 minutes later with a letter, but not the one I asked for, one that reads…. and I quote “I wish I were old enough so I could run away.”    We have to talk about this for 15 minutes or so.  I explain to him all the privilege that comes with respecting the authority we’re given as parents.  We love to provide for his needs with food, a warm bed, clothes, and fun things to play with.  We’re happy to keep him safe from the elements of the outdoors and people that might be unkind toward him, or wish him harm.  However, if he chooses to leave our home, he leaves that protection, and it would break my heart and would scare me if he made that choice, so I hope that he is able to appreciate these comforts and accept some of the responsibility that comes with keeping them.  He quiets down and doesn’t seem so gung ho on running away, but is SHOCKED to realize that this choice to threaten mom with a scare of running away rather than just writing the lines as originally asked has earned him 5 more lines.   LONG story short, around 2:30pm he makes it upstairs with his lines finished and makes himself his hard earned lunch.

During the in’s and out’s of that stand-off, the others were fed, the kitchen re-cleaned, to include discovering the remains of a melted spiderman figurine in my oven.  He didn’t stand a chance. 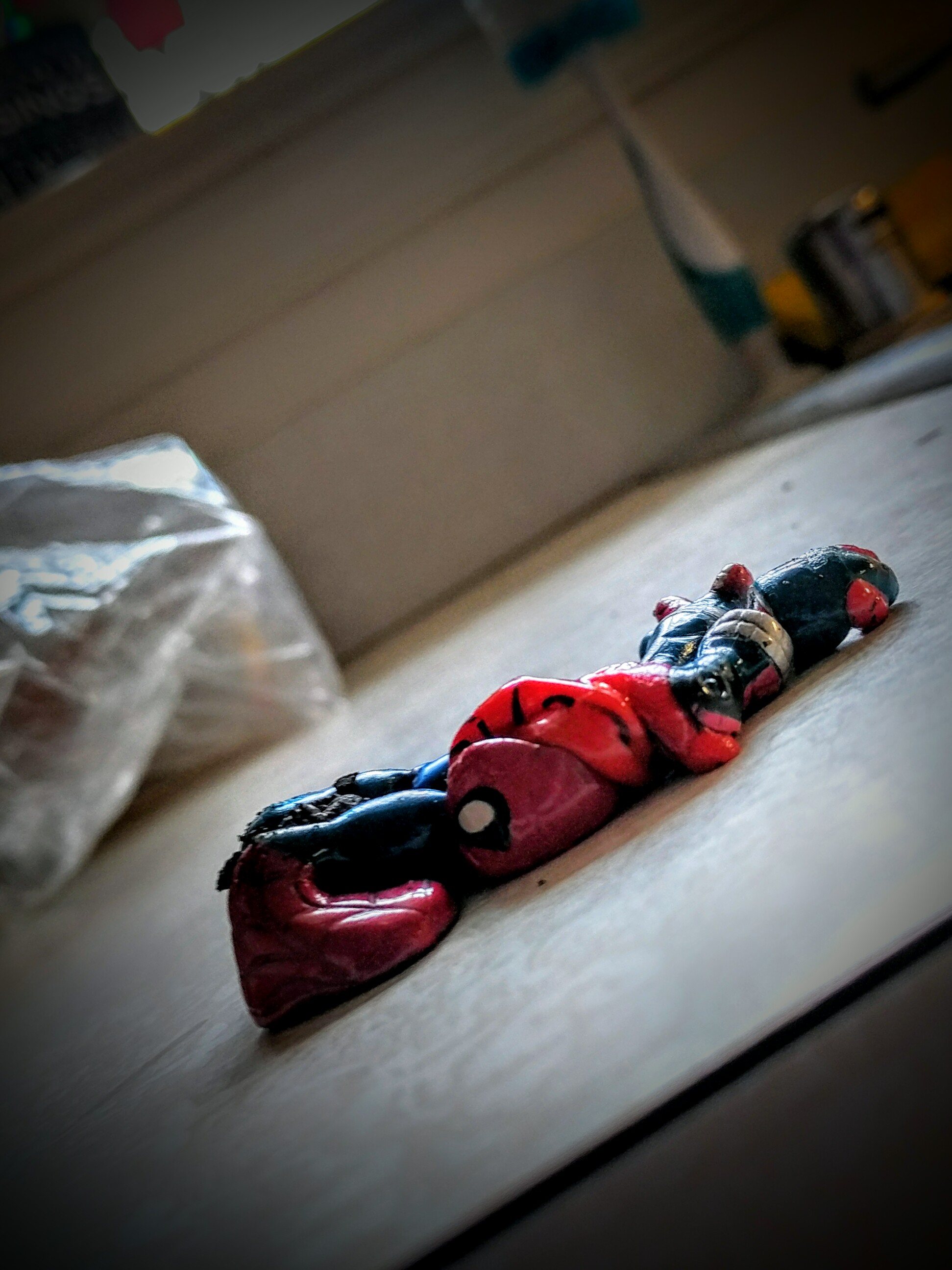 The living room gets picked up,  my bed is made, and a few more emails and I.M’s are answered for work.  I’m still in my pajama’s, and my hair has still not seen a brush.  I finally make a sandwich, my first meal of the day, and everyone gathers around to ask for a bite, because mine is clearly the most superior sandwich that has ever been made.

As 2pm approaches, Selah and AJ get ready to nap, Logan has earned his electronic time after reading and/or writing his ‘book’ (plagiarism doesn’t apply to 5 year olds), and I will finally take a shower and brush my teeth.   This might be my favorite time of the day…. and bed time.  I realize there is a theme to this…. my children SLEEP, and there is PEACE!  This is also when I can focus with just the bigs on their memory work for our homeschool co-op, so we make some drill games, and award prizes for winners, and inevitably at some point, there is angst and contention on how the handicap for Logan was levied to make things fair.

By 3:30 one or both the littles are awake, and we try to play something while all of us actively wait for Daddy to get home.  Active waiting involves checking the clock regularly, and me telling them as many times as it will work, to go to the window and wait until they see daddy and let me know when they do.  This usually buys me about 5 minutes every time…. if it works 4 times…. that’s 20 minutes.  TOTALLY worth it!

Somehow, and I’m never entirely sure how, but between the house being somewhat clean going into nap time, and when Daddy gets home, everything is unearthed.  I really can’t figure this out.  Sometimes I make a last ditch effort to pick-up…. sometimes I throw in the towel and turn my attention to dinner, and the blur that will be the rest of the evening until they get into bed.

It’s exhausting.  The messes change, but also stay the same…. so many messes.  So many needs.  SO. MUCH. TALKING.  It’s a pretty standard day.  Teaching kids is a messy business.  Building lives, instilling discipline, educating, helping them build the foundation that will carry them through their life, is exhausting work.  There is no greater work than the building of a solid foundation, and this is what I remind myself of on the days when I want to give up.  The foundation will support incredible creations if laid correctly.  When we lay a new layer of learning on what has already been built, I am here to see what strains exist as a result of rushing through a previous build.  Where did my impatience with the process introduce cracks in their foundation that need repairing?  I’m also here to celebrate the progress, and those times are the BEST!  When the day to day yields indistinguishable results, we can look back. 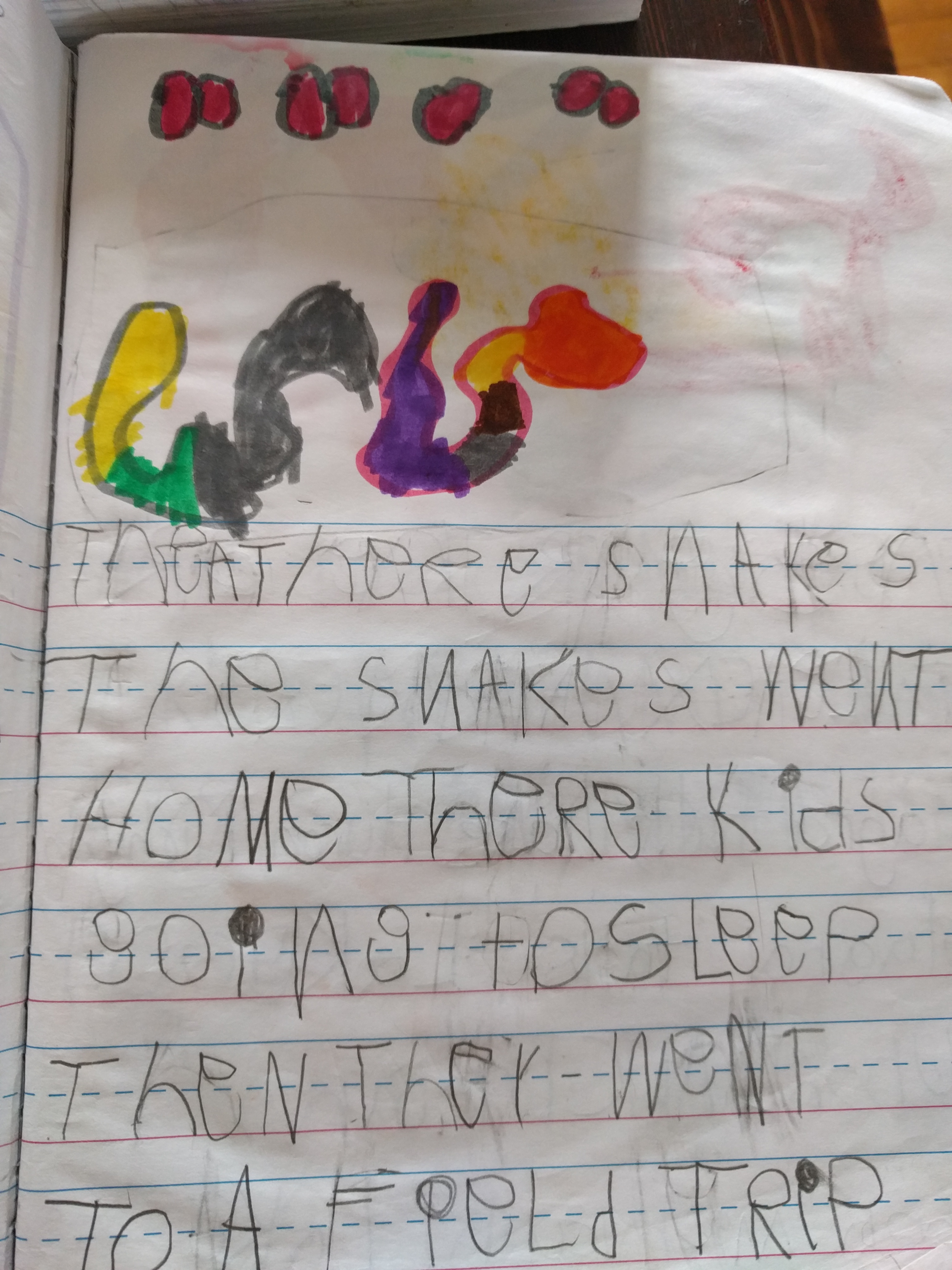 (A journal entry from Logan at the beginning of our year) 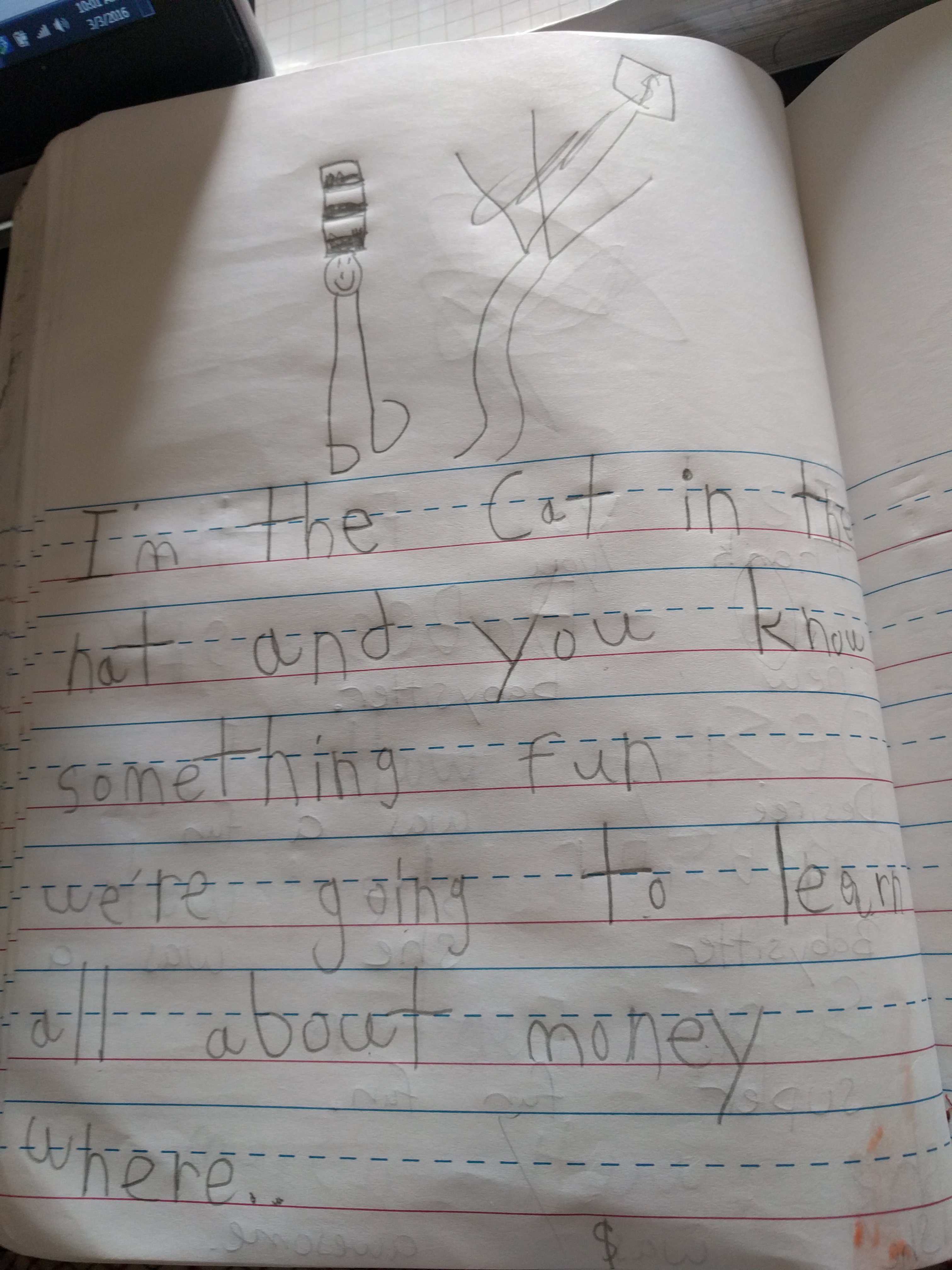 (A journal entry from Logan this week)

When I can read handwriting that I previously couldn’t.  When they can read me stories I used to read to them.  Home-school is absolutely the HARDEST thing I’ve ever done in my life.  Had not this been the one thing God decided He wanted to be absolutely clear on with me, I would have rationalized my way out of it.  Some days I still try to, and yet, progress.  By the grace of God, progress.

The struggle is real, and most days not all that beautiful, but a foundation rarely is.  A foundation isn’t the glitz and glamour, it is the concrete and four by fours that someday will be strong enough to hold a castle.  I have the end game in mind.  I want to add to a legacy of love, work ethic, and patience that I can now see from my grand parents and Kevin’s, all the way down.

Today…. on a pretty standard day, I’m choosing to see the adventure that awaits all of us, rather than rinse and repeat nature of our daily life.  To whom much is given, much will be required.  I’ve been given much, but there is so much more I want to do and see.  I believe the release for more is tied to finding contentment and fully using all of your gifts where you are at.  I am nothing if not competitive, and when I figure out that I am the only one standing in my way….. well look out!

Had to laugh when I found this pic in my phone…. I figure its how my kids might see me…. ‘off balanced, slightly unfocused, picking stuff up, with a half-crazed look in my eyes…. but hopefully…. HOPEFULLY still smiling.’ 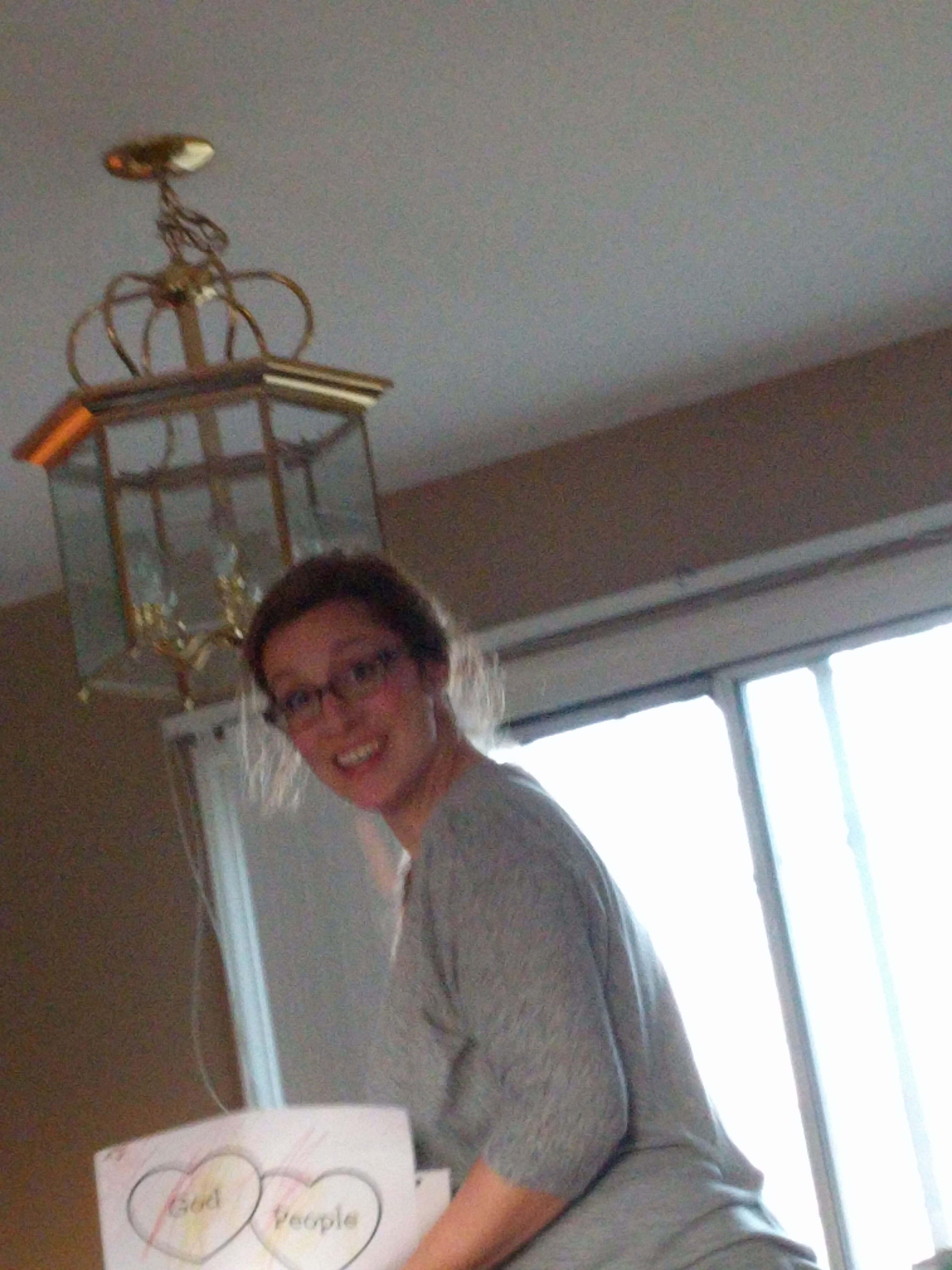