There are ‘pretty standard days‘, and then there are day’s when the boys throw me a curve ball.  I write about most of the curve balls, because they are generally so far out in left field, that I need to document them just to prove to myself that it actually happened!  There was that time we were dedicating AJ, and Logan decided to kick Caleb in the face… On Stage… At church.  Then there was the time Logan decided to cut his own hair…. AFTER peeing in the dirt because he wanted to make mud?!?  Or how about the time Logan decided to pee all over the bathroom, while Caleb wrote on the wall?  Fun times, fun times.

I sent the boys out to enjoy the beautiful weather after they finished their school work yesterday, and proceeded to get caught up on my work like usual in the afternoon.  It was looking pretty standard.  Then, while talking on the phone to my little sis, I happened to look out the window…..   This is what I saw. 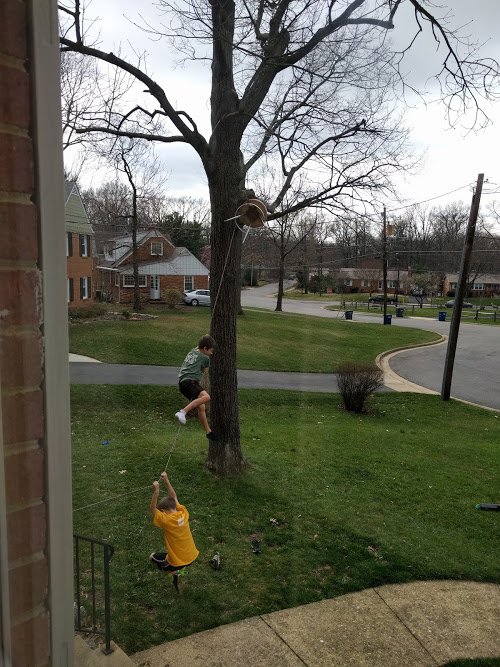 Why yes, that IS a bar stool you see hoisted roughly 25ft in the air in the tree in our front yard.  That’s not where you keep yours?  Yes, you ARE seeing it correctly, that my 7 year old is shimmying his way up a rope, using the bar-stool as a counter weight….. All while his younger brother is attempting to swing his body using the rope.  All very very safe I assure you.  Apparently, after manufacturing a pulley to hoist the bar-stool, effectively locking the rope in place, they tied off the slack to the wrought iron porch railing, and deemed it weight bearing.

Sometimes there just aren’t words.  I had to applaud their creativity, and would much rather encounter these creations than see them aimlessly stare at a video game from the safety of our house.  However, after having been raised in a home with sisters, there are just some things I never would have thought to address!  Future engineers right here!