It was a momentous night at the Alspaugh household.  Caleb went on his first date.  The lasting effects of a 4 year old taking a 20+ something out on a date will be something for the therapists couch, I thought it would be cute.  Come to think of it, most of my parenting decisions are made on how cute something stands to be, or how funny.  This confession alone will hopefully save them from many unnecessary hours shrinking their brains.

Caleb has developed a bit of a crush on the Director of his Sunday School program.  After a very smooth invitation on a date last Sunday, she graciously accepted, and the plans were set in motion for a rendezvous this evening.  I was asked no less than 35 times today if it was ‘time to go yet’.  He wanted to wear his ‘beautiful clothes’ and we had to gel the hair.  At his behest we picked up flowers, and he made her a card.  As we’re about to take off I reminded him that gentleman open doors for ladies, and they pay for the meal.  He got a very serious look on his face and asked if I thought he had enough coins in his piggy bank to cover the expense.  I assured him I would give him what he needed, and he lit up with a sweet “Thank you very much for sharing your money with me”. 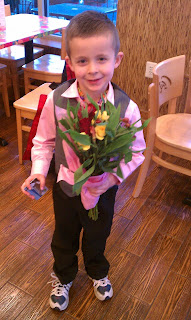 Here he is all set, ready and waiting for his date.  Flowers in one hand and his ‘credit card’ (gift card) in another.  I’d planned to stay put at least to watch him open the door (as he had practiced) and listen to the open lines he’d been preparing all day, but alas parking was at a premium so to expedite things Logan and I gave up our spot so Ms. Chelsea (cub’s date) could take it.

It was a weird feeling, watching your 4 year old, from the drivers seat of your illegally parked car, with your two year old already jabbering in the back seat, go open the door with flowers in hand for his date.  There was a lump in the throat for sure, but dang-it he was just too darn cute, and excited beyond belief.  So, I took my exit gracefully, looking forward to my own date with Logan.

My date did not start super well.  As we’re driving away, Logan is continually asking “Where’s my date mama?”  I tried to explain to him that I  was his date.  This did not go over well.  The first initial responses were “NO, YOU are my MAMA”.  When I tried to explain that taking his mom on the date, was the best kind of date, I was told to, “Stop talking, you are making me angry”.

When we parked for our date, things looked up.  I thanked him for taking me on a date, and he said ‘your welcome’, and proceeded to stop traffic for me (at an already red light) so I could cross, yelling at the cars the entire time “Coming through, look out”.  When one made a legal right turn well before we had gotten to that side of the street, Logan about read him the riot act, letting the driver know that his car would promptly be going to jail.

We made it to our destination, and had a lovely dinner, although I will need to work on his ‘wandering eye’ before he’s fit for a proper date of his own.  I was not sufficient entertainment for him, and he proceeded to engage in conversation with every table within earshot, and as much of the waitstaff as he could flag down.  At least one was nice enough to snag a picture for us…. we’re still working on the smile on command for the camera. 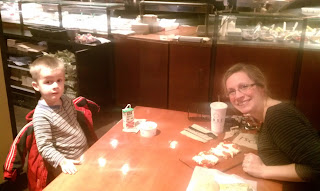 As bed time quickly approached we took off to pick Cub up from his date.  From the near constant chatter regarding every detail of his date, from the time I picked him up until he was tucked into bed, I would hazard a guess the date was a success.  A very smooth night for the young Alspaugh men indeed. 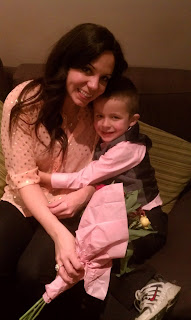