We had our 20wk ultrasound this morning (Monday).  I’m posting a day late so I could have time to call the fam and let them in on the news before it hit the world wide web.  However, there was that urge I couldn’t ignore to write what it feels like to know, as I’m feeling it, before life got in the way and I forgot.

The whole family went in for the check-up.  The boys couldn’t wait to see what their little brother or sister would look like!  We all wore a shirt denoting our guess, I wore a navy and pink stripped shirt…. I cheated a little, Caleb wore pink, Logan blue, and Kev couldn’t play cause he was heading to work right after.  On the way there Caleb adamantly explained we NEEDED a sister, there were too many boys and he didn’t want another one.  I explained I was hoping to even the playing field a little bit myself, but that ultimately it wasn’t up to us, God would give us the perfect fit for our family and we would love it with all of our hearts.  Caleb wasn’t convinced.  I said a quiet prayer for the millionth time that it be a little girl.

The boys were in absolute awe when the first images came on the screen of the profile.  Logan said he wanted it to come out right now, “where’s my baby, is it coming now?”…. He still isn’t grasping how much longer we need it to cook for.  They quickly lost interest as the tech started measuring everything else that they couldn’t quite make out.  I asked a few questions if things looked normal, however she said this was just a lab and all results would be sent to a physician for analysis, and I would be contacted with any abnormalities.  That didn’t sit super well, as it sounded like that elusive line they give you when they don’t want to deliver news themselves, but I’m refusing to allow my brain to go there, believing that from what I was able to tell, everything looked healthy and was measuring well. 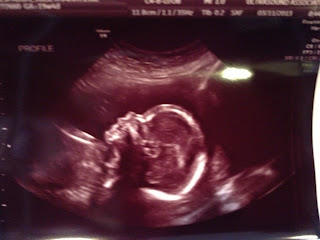 Then the moment of truth came.  I knew it before she said it.  I’d seen it twice before.  There is no point denying that there was a moment of shock and disappointment, or denying the guilt that came with that feeling.  Knowing how excited I am for this baby, but having believed that maybe this would be my chance to see what a little girl version of Kevin and I looked like, to buy bows, do hair, and oh the clothes that I had dreamed about.  Its a weird parallel universe to inhabit for a bit, mourning the loss of what might have been, while embracing the excitement of what will be.  It was different than with finding out what Logan would be. We were certain of the desire to try for the 3rd, but that certainty is not here this time.  Its not out of the question, but I won’t try for the 4th, only in an attempt to get a girl, that’s too much pressure.  We’ll wait and see how my brain/heart feels about the prospect of 4 boys when/if the time comes to entertain those thoughts.

After the tech confirmed it was a boy, I turned to Caleb to ask if he was excited to meet his little brother, he was more quiet but said yes, while Logan was squirming uncontrollably in Kevin’s arms saying “I’ll take him, he’s mine, that’s my brother, I want my baby”….  Excited to say the least.  That moment was a testament to how different their little personalities are, Caleb was holding my hand and stroking my hair with his other, while whispering ‘he loved me’ in my ear.  Logan, after exclaiming his acceptance for his new brother, had officially seen enough of the room and wanted to explore elsewhere.  What this one will be like, I haven’t a clue, but am looking forward to figuring it out.

My brain is still reeling a bit from the news as I write this.  Thoughts of camping trips, sports, adventures, and a life fully in motion swirl a midst fears that I won’t be able to keep up, how we’ll afford to FEED them, and as I wrote before, if I’ll be left behind, forgotten.  I’m thankful for the AMAZING father Kevin is, that God has blessed us with boys that will have such an awesome example to follow as they grow.  I’m thankful for how engaged and active he is in every component of their lives, and know that God has given us boys for this express reason, to raise up men fully devoted to Him and leading in His Kingdom.  This is the part that excites me, the part which brings me out of my parallel universe, believing what an amazing impact this little man’s life will have.  Yes, any daughter of mine would make an equally amazing impact, but there is something special I’ve discovered in the warrior spirit of my little men.  It fascinates me to watch how they balance compassion and the gentle caring side of their spirit, with the carnal side to discover, destroy, build, and lay claim too.  Growing up in a house of girls, this was at one time very foreign territory to me.  Now, I retain my title as a queen among kings, they fully enamored with me, and I by them.

Bring on the crazy!

(P.S….. This post is a perfect example of why I blog…. When I sat down, I was still in my parallel universe, not quite sure how to pull myself out.  When I write, the world makes sense again, I see things more clearly, and can let got of what’s not real to be thankful for what is!)