We’re still in the instructional stages of family game night.  Family game night sounds sweet you’re likely thinking… and you’re right…. it does SOUND sweet.  This is the exact reason I get duped into attempting it time after time.  Let me paint you a picture of what family game night actually LOOKS like and we’ll see how sweet you think it sounds.

The name of the game was “Allowance” tonight…..  Think monopoly for the 4-8 crowd.  You take your tours around the board, collecting your $3 allowance for passing home, and along the way either earn additional money for odd jobs, or have to spend/lose money for bad behavior, breaking something, or purchasing something. 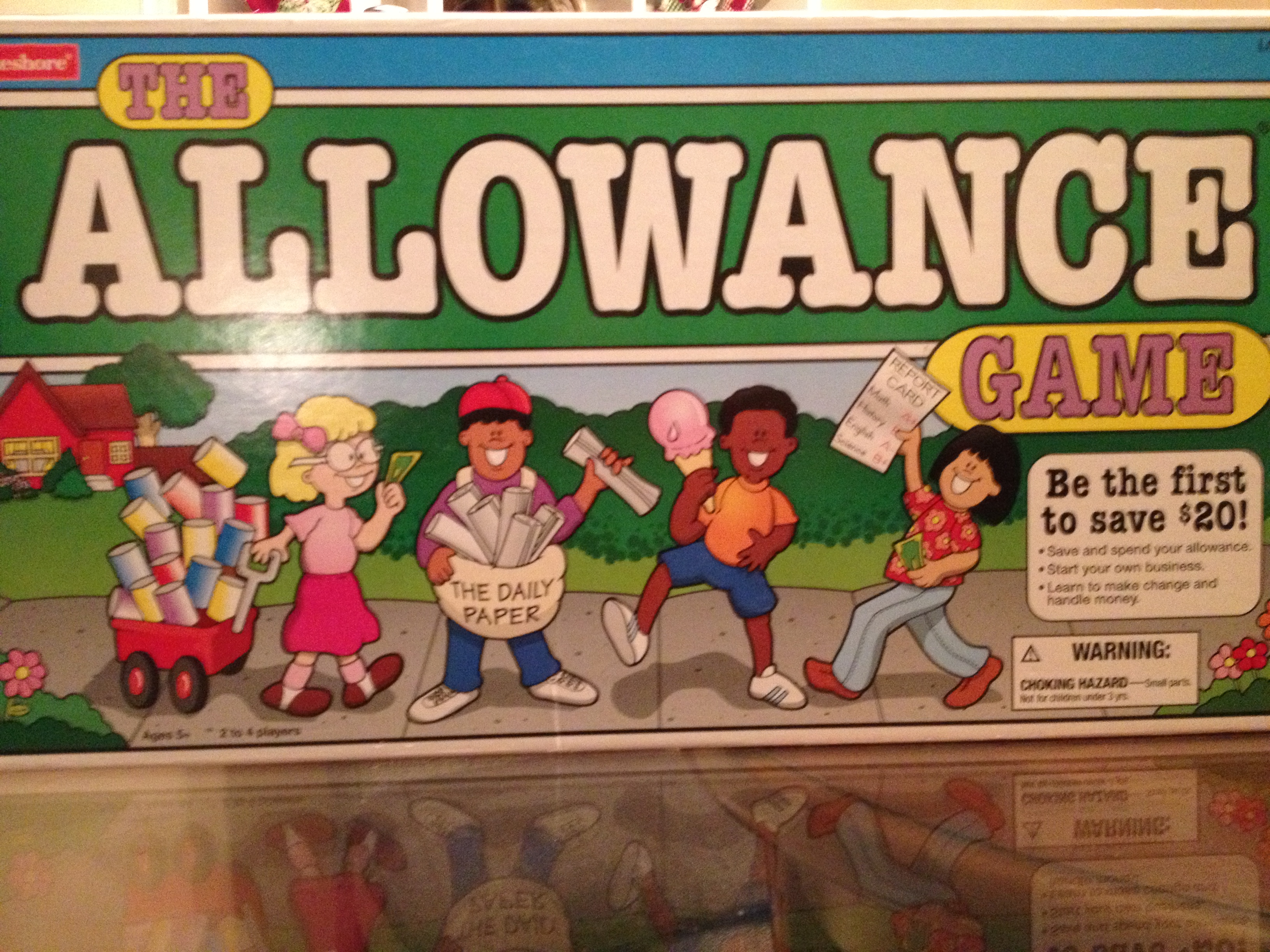 The first few rounds went great.  Then roughly 5-10 minutes into the game, attempts at cheating began, which had to be curtailed.  Followed shortly by the arguments over whose turn it was.  Subsequently Cub grabbed the dice before Logan was done counting the dots to know how far he had to move, which resulted in a re-role, and follow-up recount (each count of the dice takes 2-3 minutes, because we have to start over multiple times when he loses his place).  Then Logan landed on ‘buy a present = spend $1.30’, and we had to hear him lament about how he didn’t WANT that present.  Then began the kangaroo like hoping of his game piece around the board, rather than the quick 1, 2, 3, 4, 5…. spots, we got OOOOOOOONNNNNEEEEEE,  TTTTTWWWWWOOOOO,  THRREEEEEEEEEEE, etc….  While big, theatrical arching of the hands, taking his sweet time moving his little man around the board.  As the turns attempted to S.L.O.W.L.Y persist, the boys became more enamored with counting and stacking the money before them, rather than taking a turn with the dice.  All the while Mom and Dad are taking slow deep breaths saying as calmly as possible… “It’s your turn, love.    Please roll.   Logan…. Logan…. LOGAN.”   “What?”  (Yes, that’s right, I haven’t been sitting here talking to you for the past 5 minutes, but never mind that) “Please roll, its your turn”.  Which of-course translates to shaking the dice for a minimum of 30 seconds before tossing them as high into the air as possible, before they come tumbling down making that delightful high pitched tinny noise on the glass table, and promptly get lost under the table and chairs for the next 3 minutes.  Apparently the fact that we’d asked, multiple times, for the rolls to be gentle and close to the table was another of those selective hearing moments.

Sounds sweet huh…. about as sweet as a root canal maybe!  We all made it out alive however, with most of my sanity still in tact…. You could tell it was close when rather than playing until someone won, I announced that in 15 minutes the game would be over and we’d count to see who had the most money.  It was approaching bed time…. ain’t NO ONE in this house messing with bed time!  I try to remind myself we’re working toward something good…. someday everyone will understand the game, be able to count, follow whose turn it is, and keep the play moving.  Until then…. mama will work on keeping game night fun for all, so they WANT to keep playing when they finally understand… even if its occasionally through gritted teeth!