Can I tell you how much I hate that four weeks has passed, or how many times I’ve told Kevin that if he’d let me I’d have 18 more babies just to experience this time again?  He looks at me like I’m absolutely insane.  Admittedly, I probably am, but my mind can’t seem to comprehend never experiencing this miracle again.  My internal dialogue see’s his crazy stare and retorts with, ‘sure I just have the ability to co-create LIFE with the creator of the universe, nourish it, and then watch their unique personality, gifts, interests, etc, unfold each day…. Total snooze fest.  You’re right, it’s pretty lame, so we should definitely call it quits’.  I mean really…. I can’t be the only one that thinks that also sounds a little crazy???  I mean… look at her…. 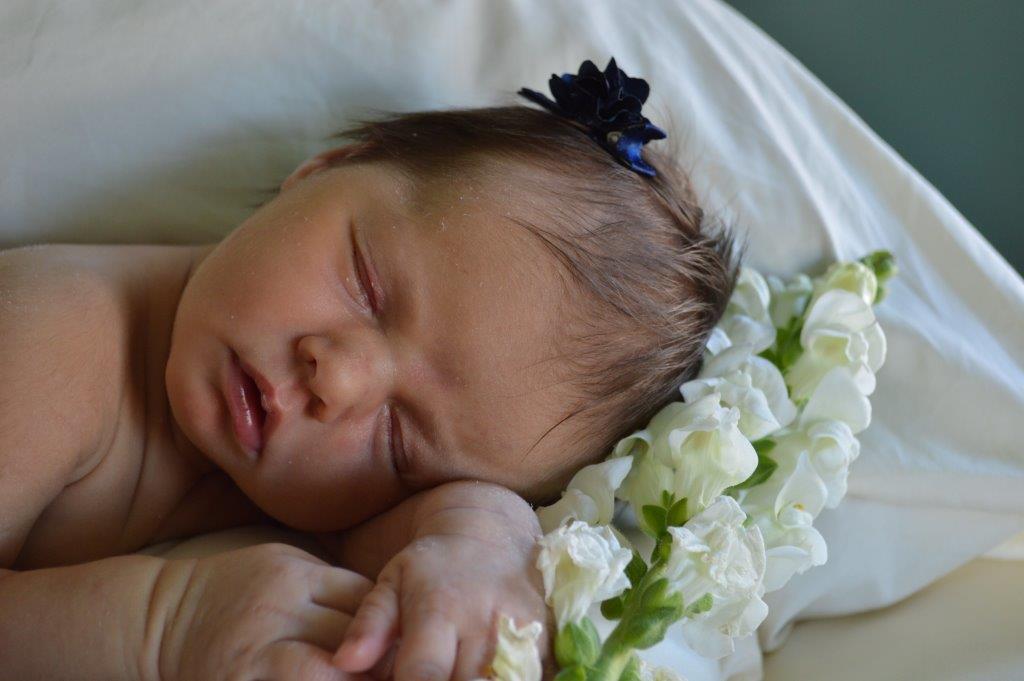 So where does that leave us?  We’re still done.  For Kevin’s sanity, I have to make peace with that, but secretly (or as secretly as putting it on the internet is, which he’ll read, and roll his eyes at for my not so subtle attempt at reminding him I’d have 18 more ;)… but SECRETLY, I’ll tell myself that if God wants to give us another miracle, then our efforts at avoiding are useless and I’m good with whatever happens.   It’s ok… you can agree with Kevin, I’ll plead insanity.   I attribute it to the beautiful little brain sucking leeches that I want more of.  Between pregnancy brain, newborn brain, and juggling trying to think/plan/see all the possible disasters 4 small people can create together, my brain is officially compromised forever.  It just is.  Is it odd that I’ve made peace with that faster than making peace with being done with them???

Look how much she’s changed in just 4 weeks! 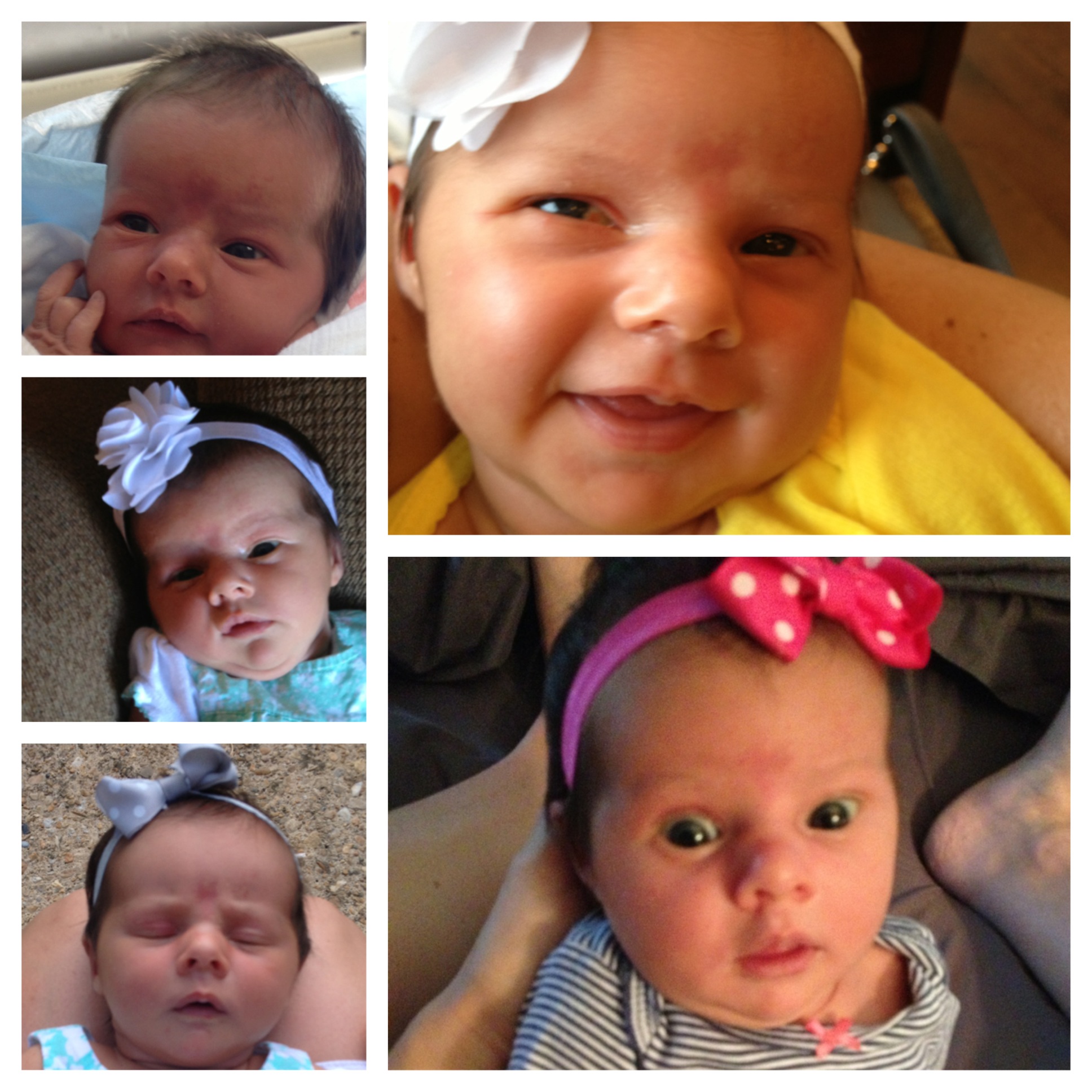 These last four weeks have FLOWN.  My mom was here the first week, then Kevin’s mom for the second, the third started with a seminar prepping for Home School next year, and ended in my crash course of trying to coordinate activities out of the house with four kids.

Last Wednesday night Kevin casually mentioned that there was this replica of a 19th century Revolutionary War-Era French ship, called El Hermione, that would be docked at the Old Town harbor for just two days.  I looked it up, and they were giving tickets away for free to BOARD the ship and look around, which I thought the boys would love. 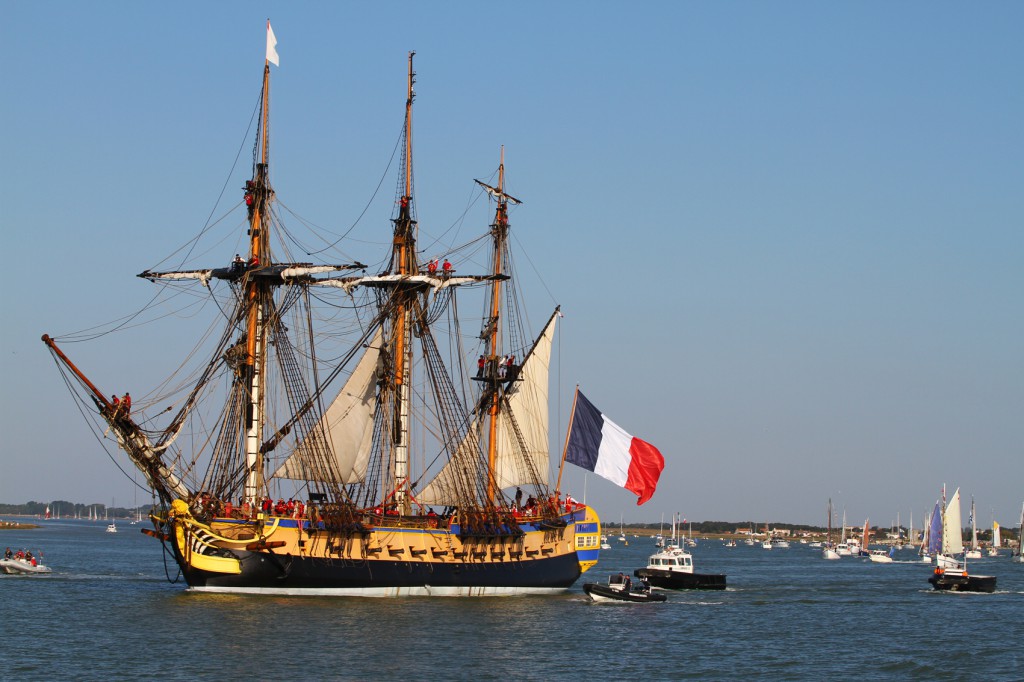 Thursday morning, my plan was to leave the house at 7a, so we could be in line to get the limited number of tickets they were going to give away around 8:30a.  This meant we actually LEFT our house at 8am, and found ourselves in a fairly extensive line.  If I hadn’t built up the experience to the boys on the drive over, I probably could have convinced them to skip the line and head home.  However, when I suggested that, Caleb reminded me… “Mom… this is a once in a lifetime opportunity, and I REALLY want to get on the boat.”  So, for the next THREE hours, with four small children and about 500 other people milling around we waited in slow moving lines, while temperatures climbed, and patience fell.  Caleb and Logan did fairly well, Selah slept, and AJ lost his ever loving mind. I tried to bring everything… snacks, diapers, a change of clothes, camera, but I forgot water which was apparently the ONLY thing he wanted.  After two hours in line, I realized the meter needed to be fed, so I asked the people around me in line if they minded holding my place.  I’m fairly certain I heard a collective sigh of relief when we walked away for those 20 minutes and grabbed water on the way back which quelled the storm, and shortly after that we were on the boat. 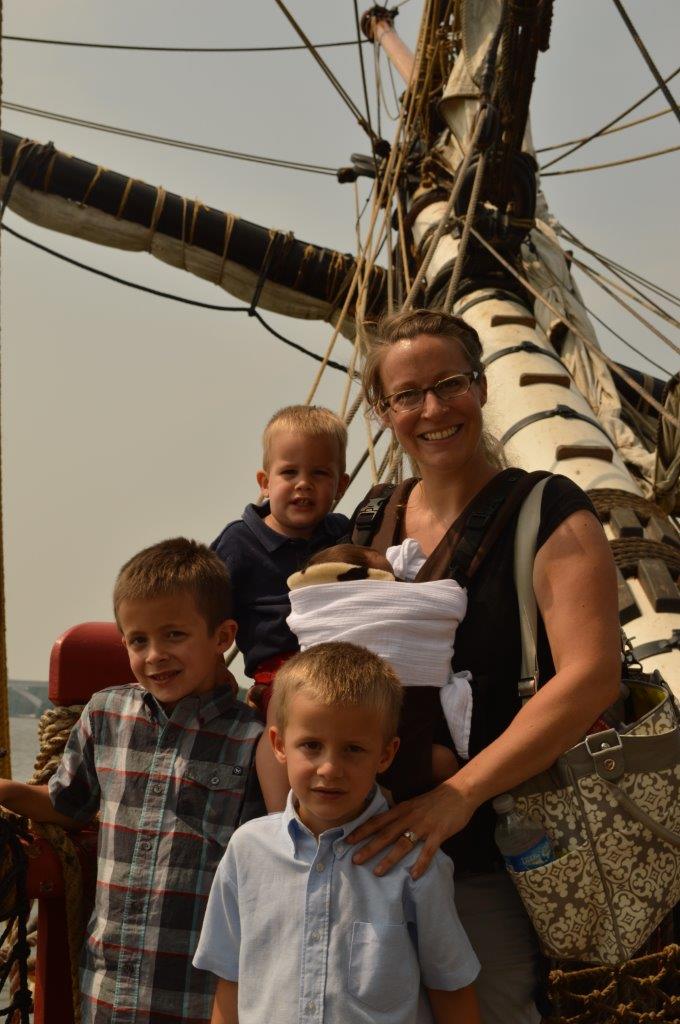 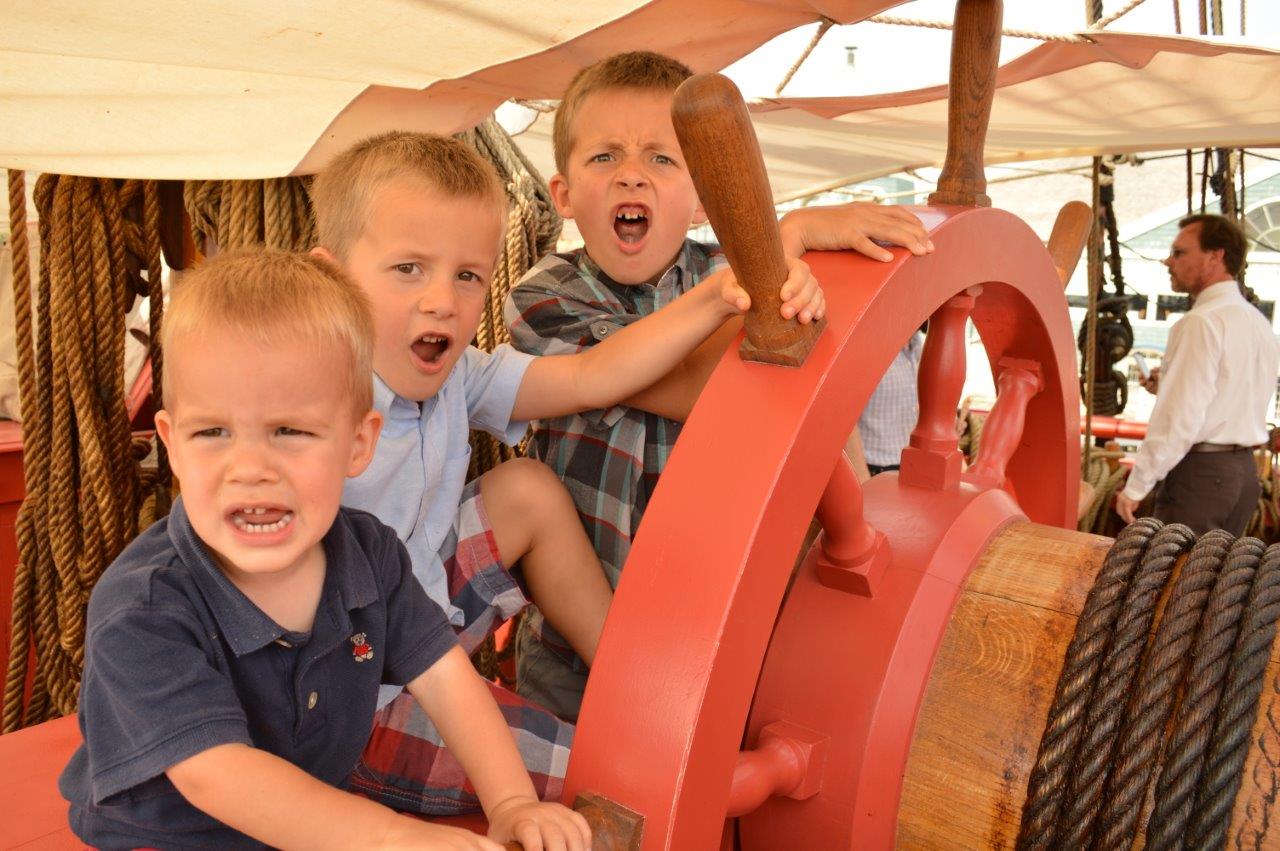 They were convinced it was a Pirate Ship and therefore would “Arrrrrg” during many of the pictures. 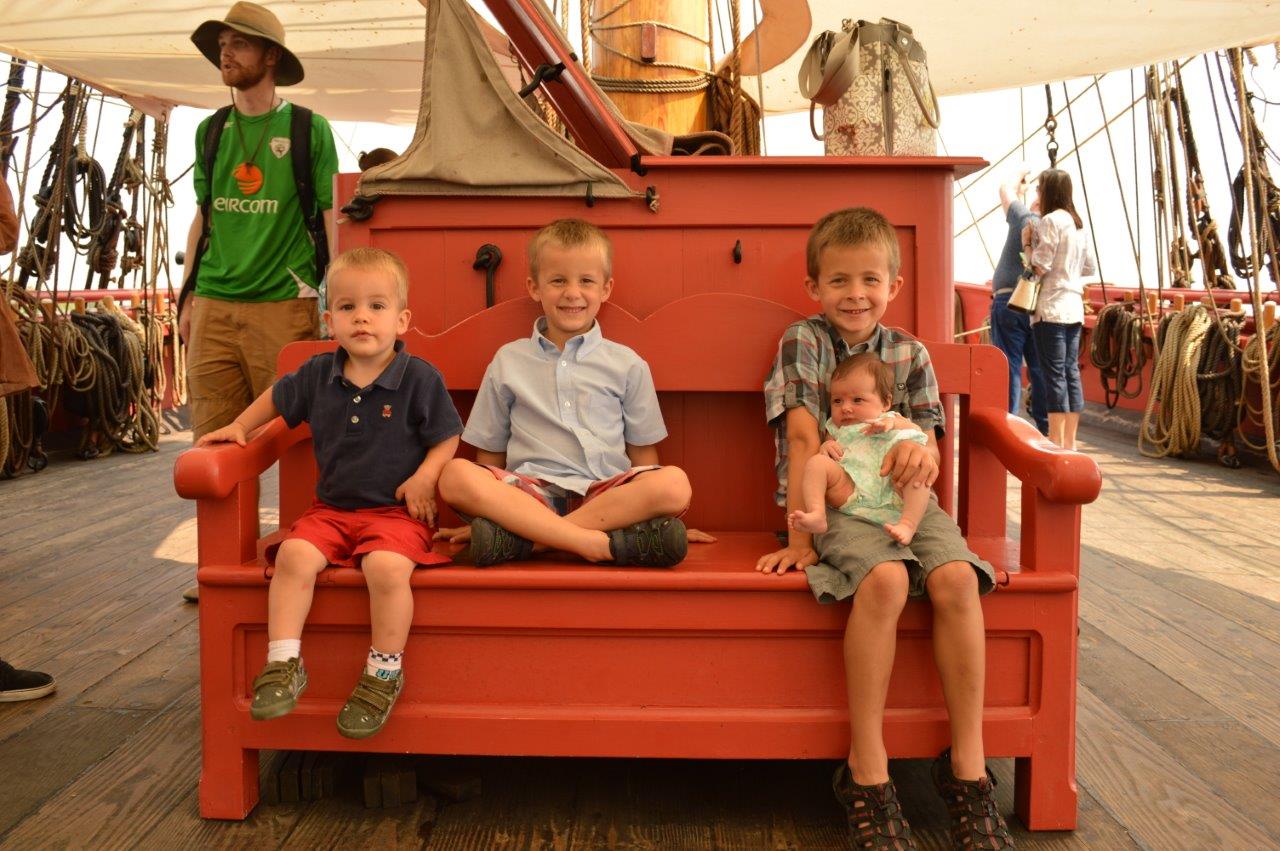 After that incredibly chill day, a wise person would probably lay low and recoup.  We’ve already determined my brain is completely shot so it would make sense that I thought undertaking strawberry picking in the 90+ degree heat would be a good idea.  After getting everyone up, diaper bag reloaded, and driving 45 minutes to the strawberry patch we learned the patch was picked over and the farm closed for the season.  Fail.  Costco, while not nearly as exciting, is still pretty high on the boys fun list with all their free tasters.  I thought maybe I could redeem the day with lunch out after grocery shopping.   About two bites into Logan’s foot long hot dog, he somehow managed to fall off the back of the lunch bench and nail his head on the floor, immediately erupting into uncontrollable screams and sobs.  This, of course, brought EVERYONE within earshot over to help the poor mother with four small children, including Costco managers asking if I wanted an ambulance (there was no blood, though you would think he was going to die in about 30 seconds for as loud as he was screaming), or to file an official report.  The thing I wanted to do most was dash out the door and safely hide away in the confines of our van…. There is no ‘dashing’ with groceries and kids.   So we S.L.O.W.L.Y made our way out the door, and then I decided we should be sequestered for the rest of the weekend, and I’m not sure I’ve made it out of my P.J’s since, other than church on Sunday, but they take my kids for 3+ hours every week… why would I NOT go there!

Outside of all THAT fun, the only thing I’ve been doing is trying my BEST to get ONE great shot of all the kids together, and maybe a posed family picture as well…. For you entertainment, the following is what that ends up looking like with 4 kids 🙂 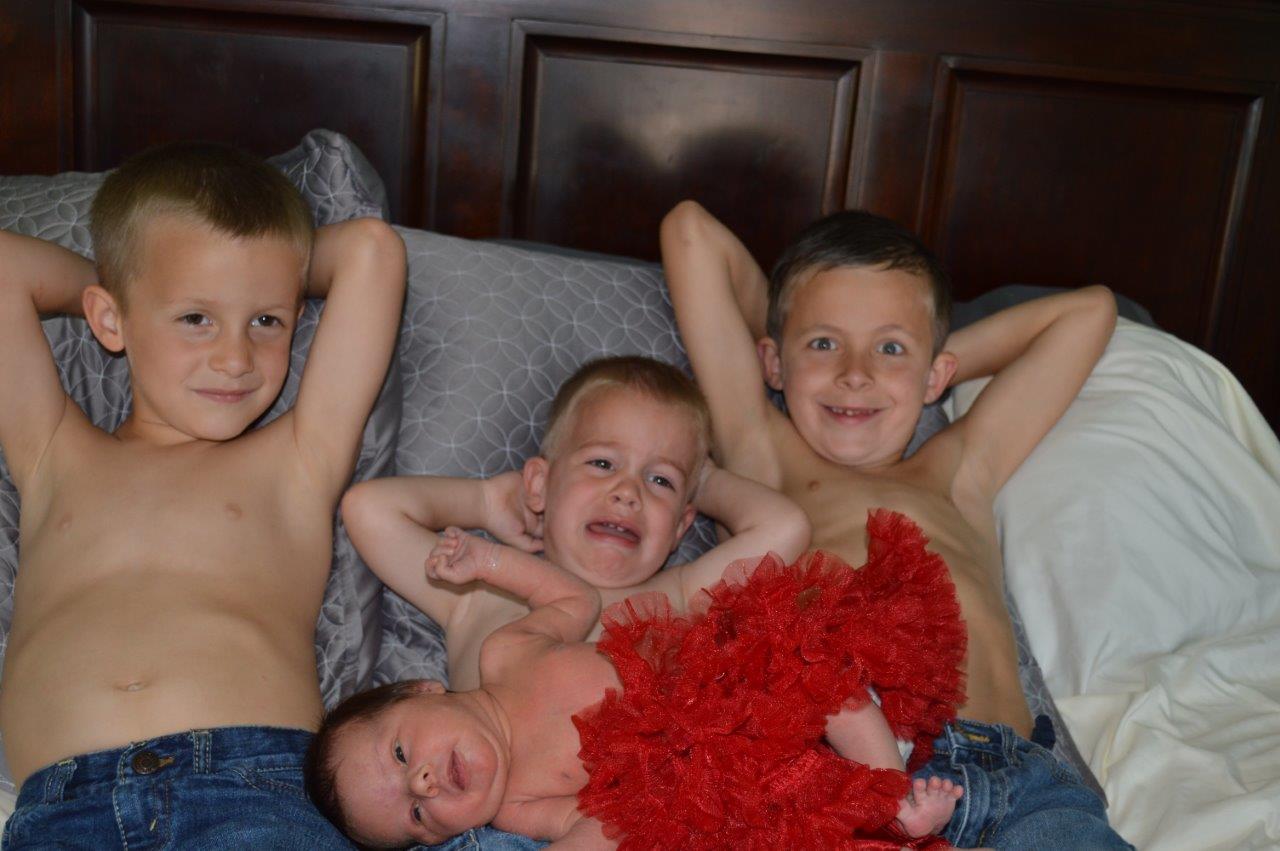 ‘Uh… brothers…. does anyone wanna prop me up here, I’m not super comfy’ 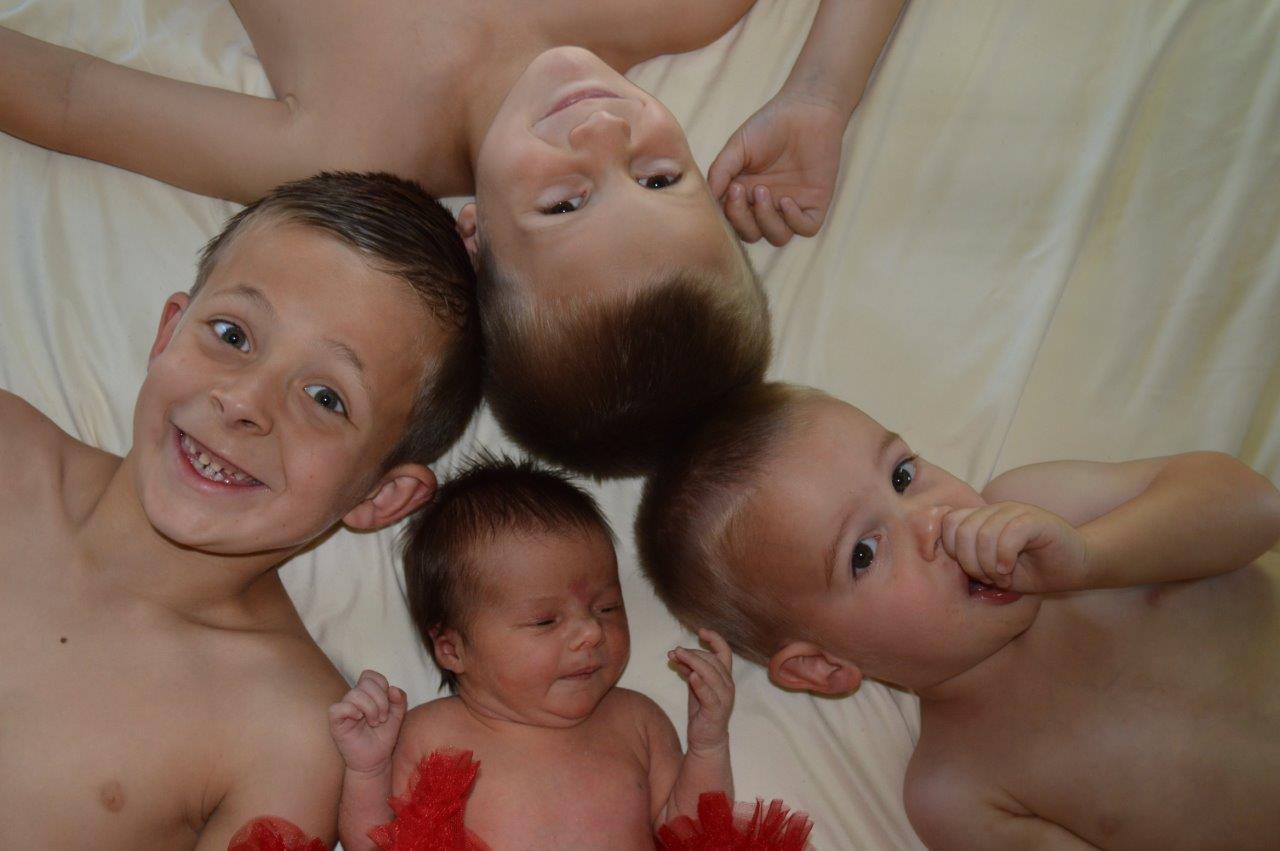 Getting their head close together was apparently too much to ask…. 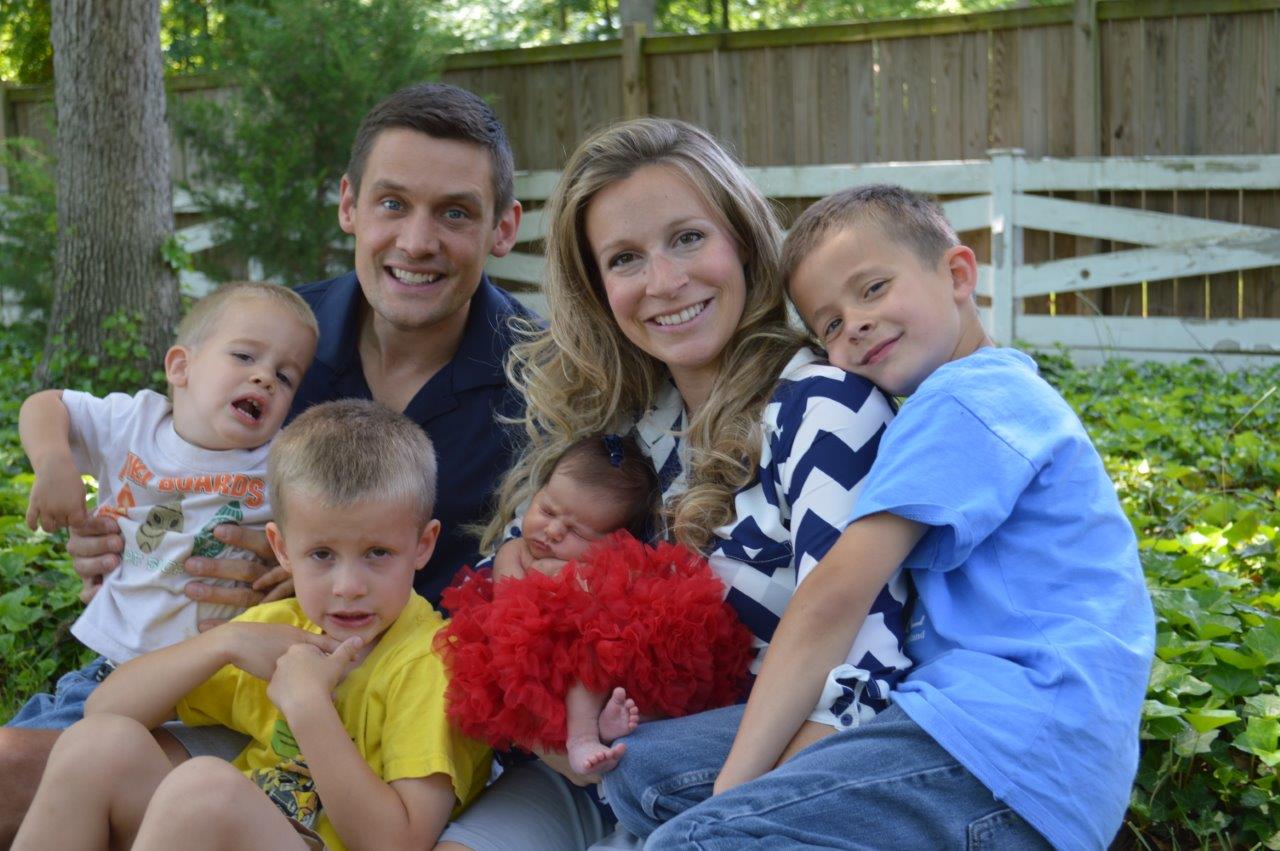 Apparently if I put matching outfits on they won’t even get near the camera, but when they can wear their grungy t-shirts they’ll at least get near us…. but smiling is still asking too much….. Unless you can pretend your a ninja… then maybe you’ll smile…. Nope, not even then. 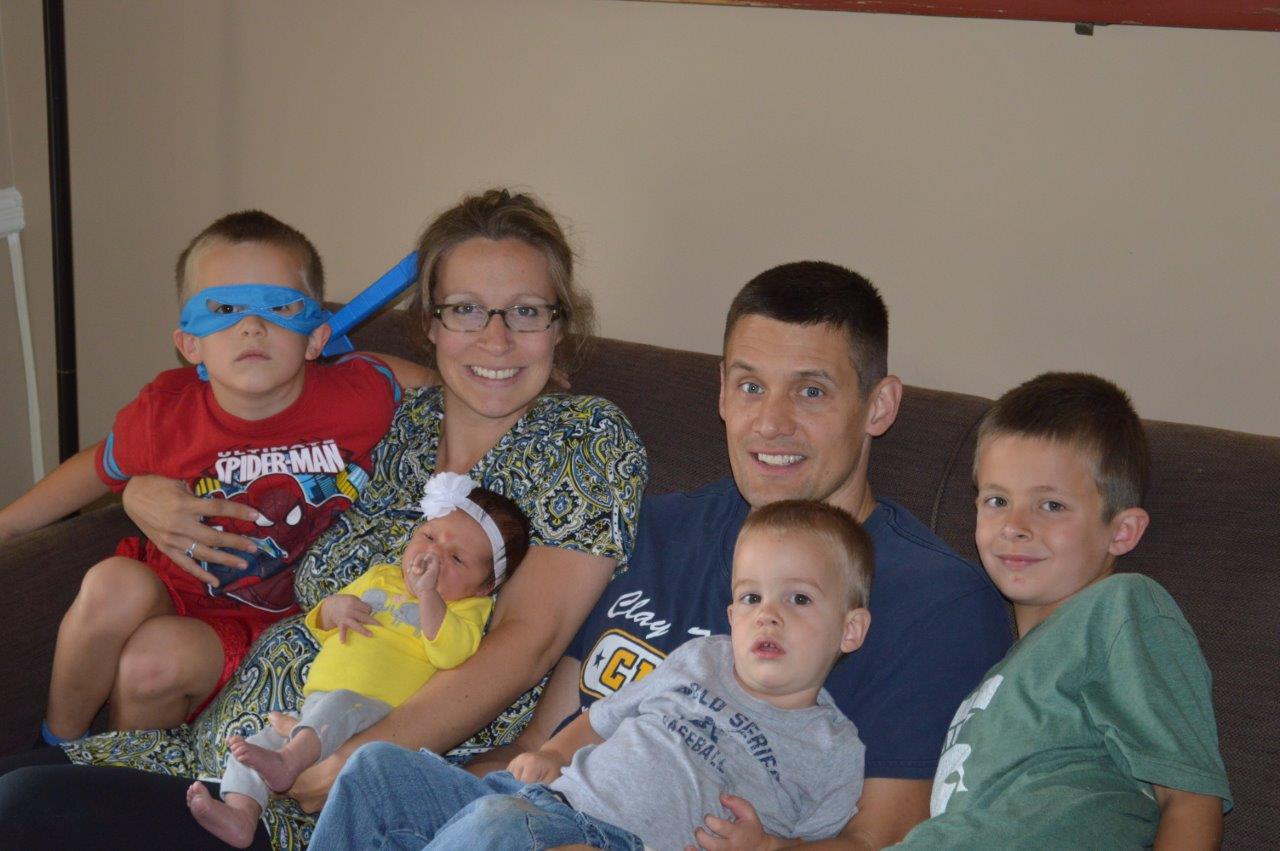 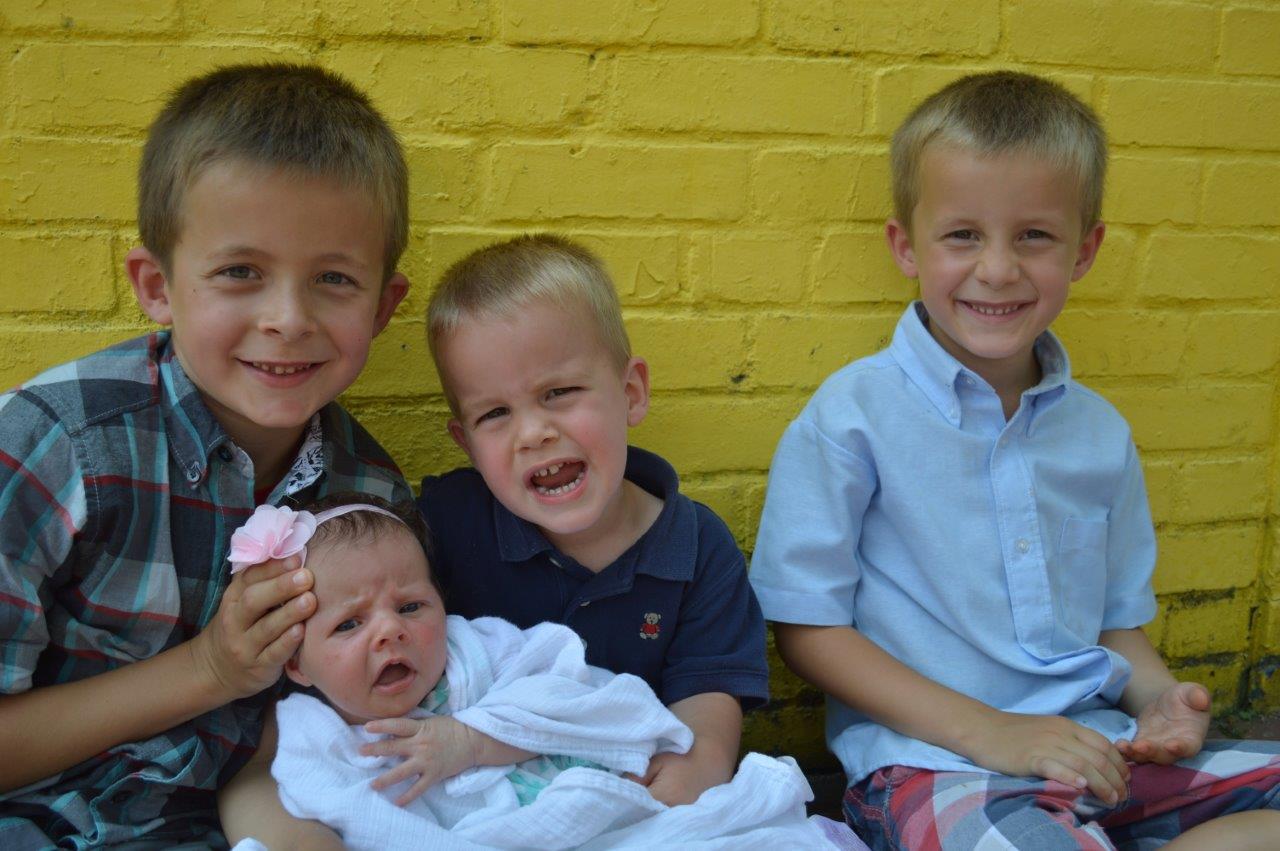 Finally got the boys dressed and cheesing in this one (with an ice cream bribe), but we still have to work on how they handle their sister…. My mom pictures her saying ‘Guys watch the bow, you’re really messing up my hair’ in this picture.

One of these days the stars will align and we’ll get something 🙂  Until then……   I’m sure we’ll have even more fun attempts when all 10 cousins get together next week while we’re in Michigan and try posing for the cameras then!