I’ve written at length about my mostly ungraceful entry into motherhood, raising myself as I learned how to raise a baby, both fumbling through life.  Now, as I shift from babies to big kids, I don’t want to waste time fumbling around, lamenting the difficulties like I did the first time.  The saying goes, ‘when you know better, you can do better’, and that’s exactly what I want to do.  Life is hard.  It is an equal opportunity offender.  I used to believe the lie that it was hard because I was doing it wrong, and I would beat myself up endlessly, spinning my wheels trying to find the ‘right’ way.  Arriving at the realization that life is so much more how you respond in the hard, than trying to circumvent it, is giving me the chance to approach this new season eyes wide open.

Babies are a season where protection and provision are paramount.  We become mama bear because we have to protect our young, as they learn to toddle around the house, putting everything in their mouth.  They are an imminent danger to themselves, simply because they DO. NOT. KNOW.  so we protect, we anticipate, we shelter, and provide carefully curated opportunities to learn from their ‘allowed’ mistakes.  We do this because we love them, with a primal love that runs so deep it can occasionally trigger reactions we didn’t expect and sometimes aren’t exactly proud of.

Caleb…. my love… I’m sorry.  I’m sorry you unknowingly bear the brunt of raising your mama to a higher standard.  I don’t know, what I don’t know, and its often you that becomes my default teacher.  You know so much more than I give you credit for.  You truly are brilliant, so much so, that it scares me what you’re picking up that I’m not even aware of.  And yet…. as what you DO know grows… you still don’t KNOW it all, and mama is having a hard time loosening my iron clad grasp on protecting you from yourself.

We’re working with Caleb to begin taking ownership of his home-school work-load.  AJ will join the fray next year with Kindegarten, and I’m working this year to create margin to accommodate the hands-on intensive that are ‘the basics’: reading, writing, arithmetic.   What this looks like for us is ensuring we’ve clearly laid out the daily expectations, and finding our way through letting him ‘manage’ that.   That has been a messy process.   Mama bear brain shouts, this is his FUTURE.  If he doesn’t do the work, and learn to do it well, then what…. I have single handedly failed him.  These are the lies my brain shout at me.  It is a daily battle for me, and we’ve had LOTS of conversations over how badly mama wants the world for him, however that as badly as I might want it for him, I cannot give it too him.   We’ve gone round and round over me giving him an inch, watching him take the mile, and 100% out of fear lash out in response.  I see the cycle, I acknowledge it, I want to break it, and I’m terrified.   Letting your kids fail, fall, it goes against the primal pull to protect/provide.

This morning I had those few moments of silence, shavasana at the end of yoga.  In the quiet, content with the work my body had just done, my mind drifted back to my own adolescence.  Memory after memory, in quick succession, flitted through my brain like a slide show on fast forward of my parents sharp reprimands to mistakes I made, ‘I should have known better’, ‘what was I thinking’, etc…  The feelings of shame I felt then, came flooding back to the forefront of my memory, followed closely on its heals with guilt of knowing I’ve uttered those same phrases more than once or twice.  Earlier this week, Caleb and I had a throw down.  He was fiddling the day away, and every time I asked about school, he’d brush it off that he’d get it done.  Then it started impacting Logan’s focus.   The age old issue with parenting more than one kid.  Logan wanted the freedom to manage his own work, and was giving me hell because I kept telling him he would get there, but for now he had to focus with me.   Eventually the tension with Logan, and Caleb’s lack of focus, boiled over in me and I snapped that Caleb had to do his work and then tension shifted to him as he argued he was ‘MANAGING IT’.   Finally, I needed space, and went up to take a shower… where, out of the element, I could regain perspective.  I came back down calmer, and apologized to Caleb, while stopping to remind him of the consequence we agreed upon if at 3pm his work wasn’t done.   3pm, we decided, in this new world order, would be when his ‘office hour’ began (Yes… I’m developing office hours for my kids… and no I don’t have an opinion on how I feel about this yet, cause we’re still figuring life out).  Office hours is his uninterrupted (as best we can with 4 kids and a job) time to go over questions or things he didn’t understand and I would work through them with him.  The KEY caveat being, he has to at least attempt to do everything, if it wasn’t right, we’d talk about it, but blanks were unacceptable, and the consequence was writing a verse on laziness/diligence 100 times. (Picture a hard core, old school marm that makes kids write lines on the chalkboard, that’s what I was going for, bwhahahahaha).

I took a vow of silence until 3pm, as far as speaking about school went, and focused on work and wrapping things up with Logan.  At 3pm, he was no where to be found.  One of the other agreements, was he needed to manage his time and come to ME at 3 with work ready to be checked.  I went outside and sounded the family call, and three boys come running up the sidewalk covered up to their knees in MUD (snow has melted here, leaving EVERYTHING muddy).  I told them to rinse off, and then for Cub to come show me his work.  It wasn’t complete.  He tried to argue the blanks, that he knew we could get them done during office hours, and he was right we could have.  That was not the point.  The point was he didn’t attempt the work, he didn’t listen to the cautionary warning, and now he would have to deal with the consequences.  Let it be said, even though we grow, the universal response to ‘consequences’ remains the same….. wailing and gnashing of teeth.  There were also a few ‘I hate you’s’ tossed my way.  Thankfully office hours got interrupted with a call to pick-up Kevin from the airport, ending the tirade, and serving as a helpful reminder that we get our responsibilities out of the way early so that when the unexpected occurs we can be ready.

When I got home this letter was on my desk: 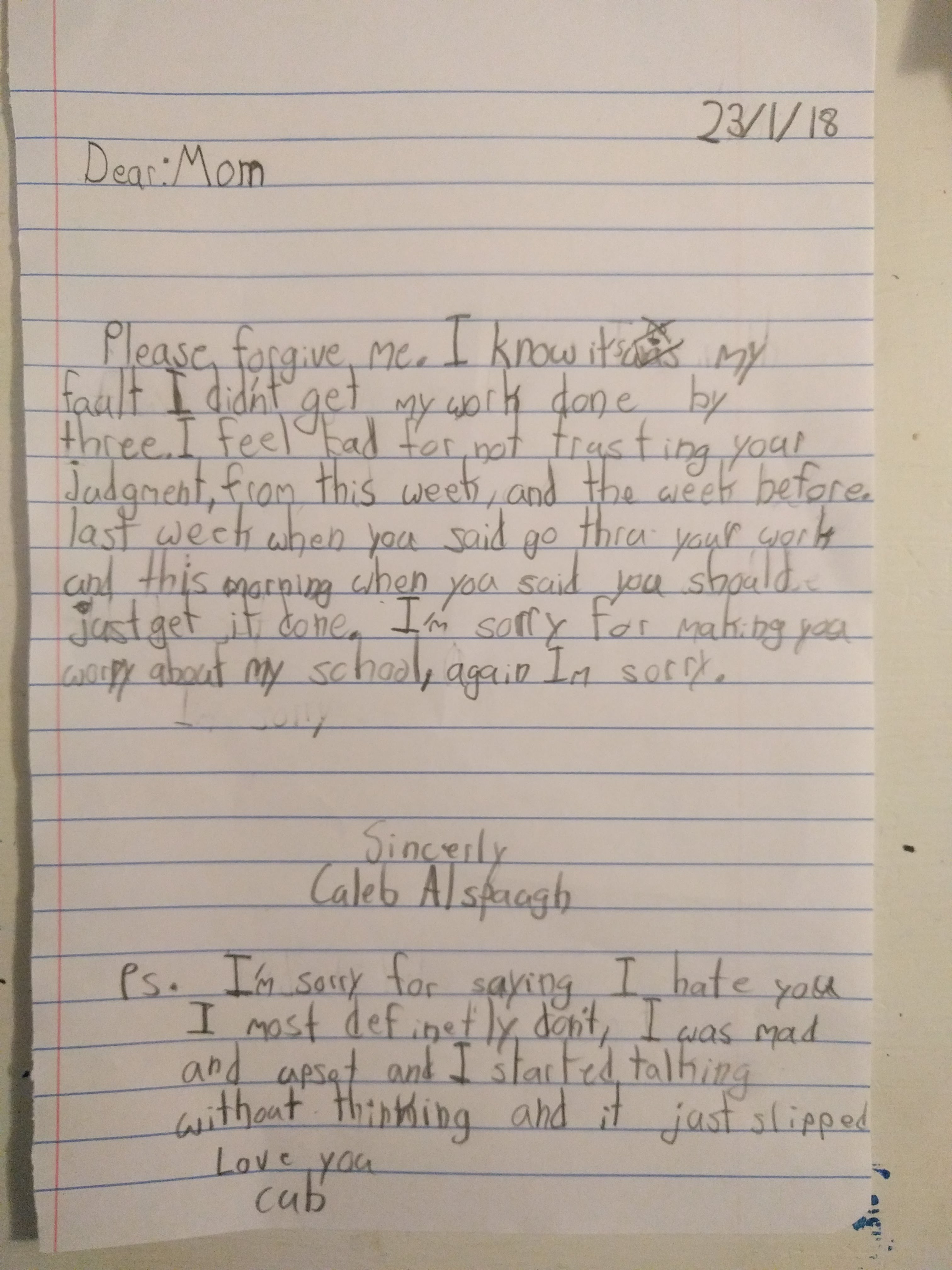 Lil dude can stick the landing, I’ll give him that.  I want to believe it was 100% altruistic, though given he stuck around for a few extra minutes asking me several times if I liked the letter, I got the impression he was hoping it would earn him an ‘early release’ on good behavior from his 100 lines.  A slippery slope exists when I relent on consequences, giving them the idea they can manipulate their punishments by playing to my heart strings.   I held firm, while conceding Dad wouldn’t have to provide any follow-up punishments for the abuse I had to endure.

I don’t know what I’m doing here guys.  This is uncharted territory.  I don’t want to freak out when I see him doing something I know he shouldn’t be doing, I don’t want to shame him when he makes a poor choice, cause let’s be honest we ALL do it, sometimes KNOWINGLY.  He’s not a baby, but he’s still MY baby, and this whole biting my tongue…. I mean…. NOT my strong suit.   On that mat this morning, lying there processing the feelings I felt as a child and desperately wanting something more for mine, I heard it…. ‘don’t be afraid’.  It’s like classic God…. His staple one liner, which is encouraging, and infuriating in the same moment….. because it’s always the precursor for doing basically the HARDEST THING EVER….. Hey Mary, don’t be afraid, but  I’m going to make you a pregnant virgin…. Hey Gideon, don’t be afraid, you’re gonna go battle an army that (by worlds standards) could demolish you…. So yeah, just go ahead and ‘fear not’.  Fear not, Julie, when I ask you to loosen your grip on the people you love most, in a world that will not appreciate or protect them the way you would like.  He asks me to trust Him, again, on that mat…. Every morning, if I pay attention, before we leap into our day…. “Do you trust me?”…. and how can I not.   He watches His several billion children everyday, likely absolutely wringing His divine hands, over how badly we’re missing it…. Able to swoop in at any moment… and the question holds why doesn’t He… if He loves us that much, why doesn’t he just swoop in?  Love doesn’t force itself upon you, doesn’t force His will to be done, but waits ever so patiently with unending faithfulness for us to choose.

Gah….. Dammit…. I hate it when I know the answer and it still feels impossible…..Why can’t this be easier?!?