This five day a week business is really cutting into my nap schedule, what was I thinking?!?  That is only part of the struggle in keeping up, albeit a big part, but SO much happens everyday around here!  I want to tell you about it all, but then it would require me to miss some of the amazing… or sleep… and for now, we continue to sacrifice sleep so know that I love you more than sleep, and that’s A LOT!

Apparently in church world, some people get pretty upset with this whole trick or treating business.  The way I look at things: I had fun doing it while I was growing up, and it wouldn’t appear that any of my many issues stem directly from jumping in a costume and asking random strangers for candy, so it passes the litmus test for my kids.

I’m a curious person though, and just because I did something doesn’t make it right, so I do like to listen into the logic people debate this issue with.  Some points were valid.  The holiday is all about death, and fear, and darkness, which stands in direct opposition to what I’m trying to teach my children to love: life, faith, and light.  I was not backing down from free candy and a fun night out with my kiddos in costume all that easily though, but it did get me thinking about a way we could have fun and make it meaningful.  I argued that in church world people get super excited about the opportunity to have even a short snippet of a conversation with ANYONE, and here was a holiday where strangers opened their doors to you and willingly and engaged in conversation.  (For the record, I am NOT knocking on doors 😉

So what does one do when they are hit with a parenting conundrum… take it to their four year old, of course.  (This is not a parenting message… 🙂

I asked Caleb what he thought we could do to show our appreciation outside of just saying thank-you, and you will understand WHY I take these parenting conundrums to my four year old when I tell you his response was “We could pray for them”…….. (this was me being speechless to that one)………..

So off we went that night… Buzz and Pumpkin: 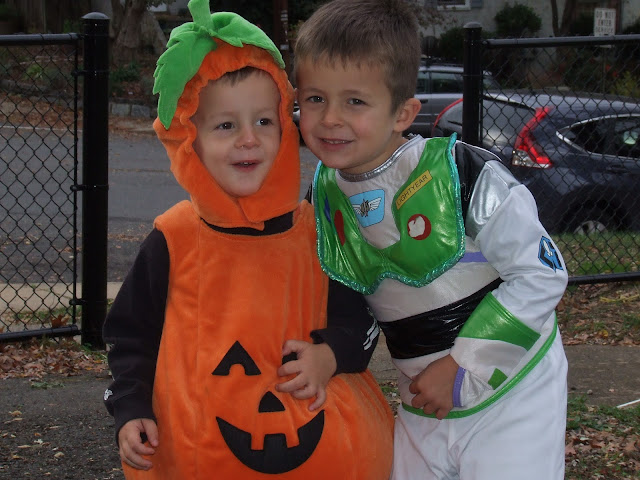 Buzz really did give new meaning that night to ‘having faith like a child’.  I was personally terrified for him, I didn’t know what type of response he would get, and was right behind him at every door should someone not respond well.  How could you not respond well to that face though?!?

After the first three houses my nerves started to subside.  People were of course shocked to hear a four year old ask if he could pray for them after giving him candy…. on HALLOWEEN…. but we almost brought the woman at the first house to tears.  After the initial shock wore off, she responded that she was very sick and would appreciate prayers of healing (I’m assuming an internal sickness as she appeared fine…. but isn’t that the way the world works…. most people look ‘fine’ on the outside).   Without hesitation Cub closed his eyes and simply said “Jesus heal her, amen” and turned around to run to the next house.   With tears in her eyes the lady said that was the sweetest thing she’d ever seen and PROFUSELY thanked ME (who let me remind you did nothing, but stand behind a small child ready to attack anyone that tried to hurt him)…. to the point she barely let me off her porch, until I had to explain my kids were getting too far ahead of me and I had to be going.

We hit about 50 houses on Halloween.  I’d say at about 75% of those Cub offered to pray.  From that number 75% were pleasantly surprised and offered a prayer request, while the other 25% would say no thank-you… and only two said nothing and looked at us like we had horns growing out of our heads.  No scene was made, we simply said have a great night and wandered on to the next house.

It was the most fascinating Halloween I’ve experienced…. ever!  If I had heard this story 3 years ago, I probably would have thought the mother was absolutely insane, so if you’re thinking I am, you would not be alone in that.  It was insane, watching a child do, what intimidates grown men.

So yeah… we were the crazy Christians on Halloween, and I wouldn’t have had it any other way!