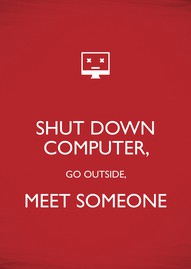 I did it…   I have this weird exhilarating feeling like I just jumped off a cliff.  A rush of adrenaline mixed up with a knot of anxiety because I just deleted like 10 years of memories.  I’m not an emotional pack-rat by any stretch, case and point: I gave my wedding dress to Goodwill 5 years ago, but there is this ball of anxiety in the pit of my stomach that’s freaking out because WHAT IF I need something?!?  There is also a tiny self aggrandizing thought that’s concerned someone might need me and now they won’t be able to contact me.  That’s likely because as I went down the options Facebook offers to close out an account, they were all to helpful in splashing a page up that showed faces of many of my friends saying “So and so will miss you…. don’t leave”.    Thanks for that.

Apparently there are two options, deactivating your account, or deleting your account.  I deactivated it first.  However, that option gives you the ability to log back in at anytime to reactivate and none of your material is lost.   I lasted less than 10 minutes.  So I took a deep breath, but on my big girl pants, and pushed the “delete account” button.   It took my account offline, but it did give me an escape hatch…. apparently there is a 14 day grace period where I can log back-in and change my mind.    I’ve placed my account on life support, and FB will officially pull the plug on 2/26 at which point all my data, contacts, pictures, posts, etc… are gone for good.  MUST. STAY. STRONG.

So now its just me and you… which according to my stats page is 17 subscribers.   It’s a freeing thought.  God pointed something out to me in these last few days, my struggle in blogging before wasn’t that I had nothing to say, it was that I was too concerned with how I would say it.   That was the big difference between self-promotion and giving it up to God to promote when/if He should see fit.  When it’s up to me, I’m the only factor between failure and success, and the temptation to sit there and monitor whatever I had posted, like I’m waiting for water to boil would pull me in EVERY. SINGLE. TIME.   It wasn’t ‘do people like what I have to say’, it was ‘do people like me?’…. Am I funny enough…. Am I poignant enough…. Am I relevant enough…. Did I offend someone on accident.   A few people asked why I was doing it, and that’s the answer…. its stupid, and I know that, but I couldn’t keep myself from getting pulled into it.  The other contributing factor was rather than expressing myself, I would read blogs and posts from so many incredible writers, and the intimidation of not being able to measure up stopped my efforts every time.

My favorite part about this past week were the texts/private messages that I got from a handful of friends…. the ones that I actually HAD lost touch with in real life, but had stayed connected with only through status updates and pictures.  It was an awesome reminder how much more the personal touch of a text meant to me than simply ‘liking’ a status update, and encouraged me to be more mindful in connecting with people through texts, emails, or calls now that I’m ‘offline’.  Having your circle go from 572 (another helpful Facebook farewell present) to the original circles of life God intended… Kevin, my boys, and baby girl first, extended family second, and those strategic relationships God brings in and out of my life at different seasons, for different reasons third, will HOPEFULLY allow me to remain more present and able to respond in the moment rather than constantly living in a state of distraction.

Ever since I was little, my fear has always been missing something…. I don’t want to miss anything.  As a little girl, I fought going to bed, convinced all the fun happened after I went to sleep.  I’m getting pay back for that now in spades, as its apparently genetic, and my own littles are constantly calling up asking what Kevin and I are doing.  If only they knew how truly boring we become when they go to sleep!  Not much has changed over time though.  Even if I’m exhausted and could easily sink into my PJ’s on the couch at 7:30p when the boys go to bed, there are many nights when I kiss them goodnight and head out the door because someone is getting together somewhere, and I don’t want to miss it.   Trying to figure out which side of the coin had me missing less was tough.  The way I saw it, I spent the last 10 years staying up to date on the latest/greatest posts and have NO idea what I might have missed as a result.  So, for the next few years while my littles are still little, I’ll have NO idea what that friend from High School, that I haven’t seen SINCE high school, is up to…. but I’ll have more time to do an extra art project with them, or make a batch of cookies with them, or teach the next one how to ride his/her bike….. Or I might do none of those things.  My children already, and will STILL, get PLENTY of my time, so I might use that extra time to write, read, or have a girlfriend over for a cup of coffee and to catch up…. or heaven help me… FINALLY try and maintain a work-out regimen of ANY sort!

At any rate, there will likely be a brief burst in blog activity, because the reason Facebook was an easy attraction is because I need to still be near my computer for work all day…. and I still have a gazillion words in my head to process all day long, so I might as well get some of them out here!