Last Saturday started like most others, we had a nice big breakfast, relaxed for a bit, then started trying to come up with our plan for the day.  The weather was nice last weekend, so we were looking forward to taking advantage of the unseasonably warmer weather.  That plan stopped in its tracks when Kevin, walking through the living room downstairs, noticed several SAW lines etched into our wooden coffee table, and a sizeable puddle of dried wax on the floor.  I heard him summon the boys, and then tones got REAL low for a bit.

Having navigated plenty of my own ‘discoveries’, I stayed out of it at first, but then curiosity got the best of me.  I walked in after Cub had copped to the saw lines but was still vehemently denying any participation with fire that could have resulted in dried wax drips all over the floor.   At six, he didn’t quite piece together that the evidence of wax already confirmed that fire had been played with, so he couldn’t yet see his attempt at a bold face lie was only making matters worse for him.  Logan, standing next to him watching the train wreck unfold before him.

“I’ll ask you one more time Caleb.  Were you playing with fire?”

“Then HOW did dried wax end up all over the floor if a candle wasn’t lit that caused it to drip out????”

“Oh. (Painful realization sets in)  Um……. (Panic)  Well I wasn’t playing with matches, it was a lighter.”

It was that critical breaking point parents hit, where immediate space is needed before a snap occurs.  So the boys were ordered out of the room, and Kevin starts gathering his things explaining that he’s going to the store to buy locks and locking them out of the play room. 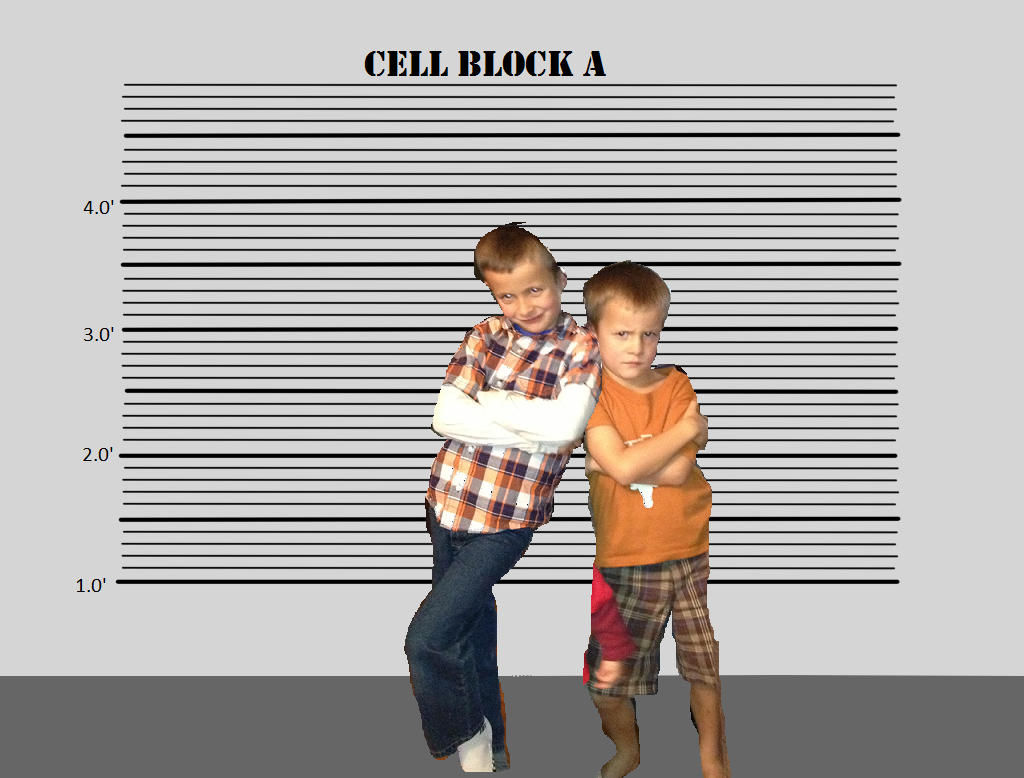 After over a year of working angles to help the boys understand gratitude for the abundant blessings they have, and seeing little fruit from our efforts.  It was time to make good on an abundance of consequences that had been mentioned, but hadn’t seen the follow-through on our part that was needed.   I cleaned their room, for what I told myself will be the last time, so they could see that stuffing their crap into every nook and cranny was NOT cleaning, grabbed 3 changes of clothes for each of them, and locked their door behind me.   We moved a mattress to the floor of the guest room, which is conveniently currently decorated much like a cell block…. 4 walls and a twin bed, dropped their outfits on the floor and welcomed them to their new home for the week.

If their clothes got dirty, which given their proclivity to use them as napkins at every meal time, proved likely, they were responsible for washing, drying, and folding their clothes so they had something to wear.  Breakfast was a non-negotiable oatmeal, that if complained about would be rescinded, lunch would be peanut butter and jelly, and there would be no snacks outside of fruit or vegetables which they would get for themselves.  That privilege would only stand as long as I didn’t find ONE partially eaten remnant carelessly cast aside to rot in a remote corner.

It was the greatest week ever…. For me.  My house stayed cleaner than it has in six and a half years.  I didn’t spend one ounce of energy thinking what I was going to have to feed them for 2/3’s of the day.  The best part was, when they inevitably descended upon my plate to ask for a bite of something delicious, I could remind them with ZERO guilt or conviction how HARD mommy works all day long and how appreciative I am of the small pleasures food can provide.  Their faces contorted in jealousy as I reminded them that when they are able to demonstrate hard work and appreciation I would be more than happy to share with them again!  It was GLORIOUS!  I enjoyed it so much, I was almost sad to see the week come to an end.  They were sprung in spectacular fashion from their sentence with an amazing feast/brunch we celebrated with friends for Valentine’s Day.  They also received a fun little present of refreshed art supplies from Mom and Dad, and (because after putting on a brunch my cooking energy from the day was spent) a surprise dinner out at McDonalds courtesy of Grammie Sue’s Valentine’s Day Card surprise. 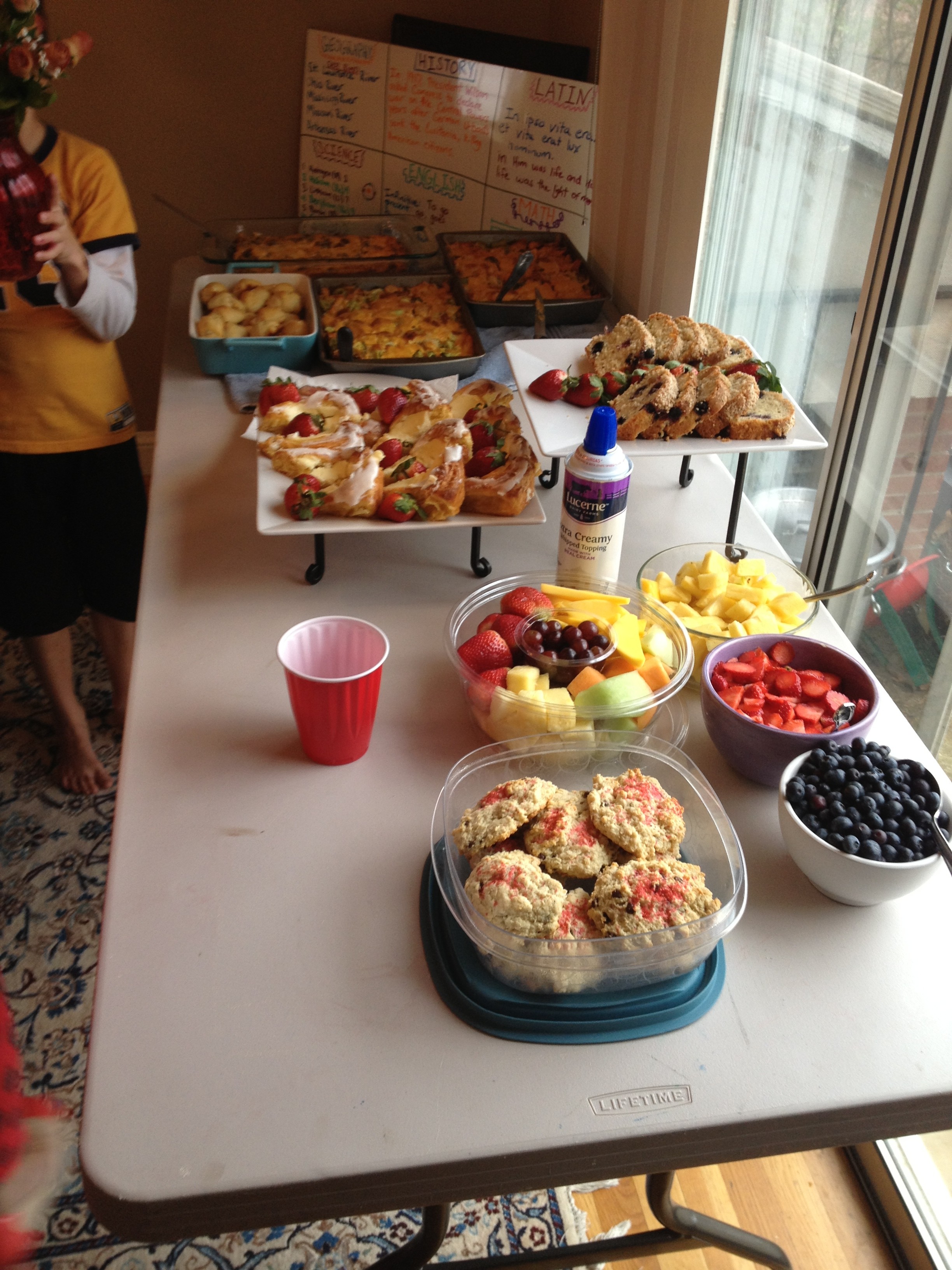 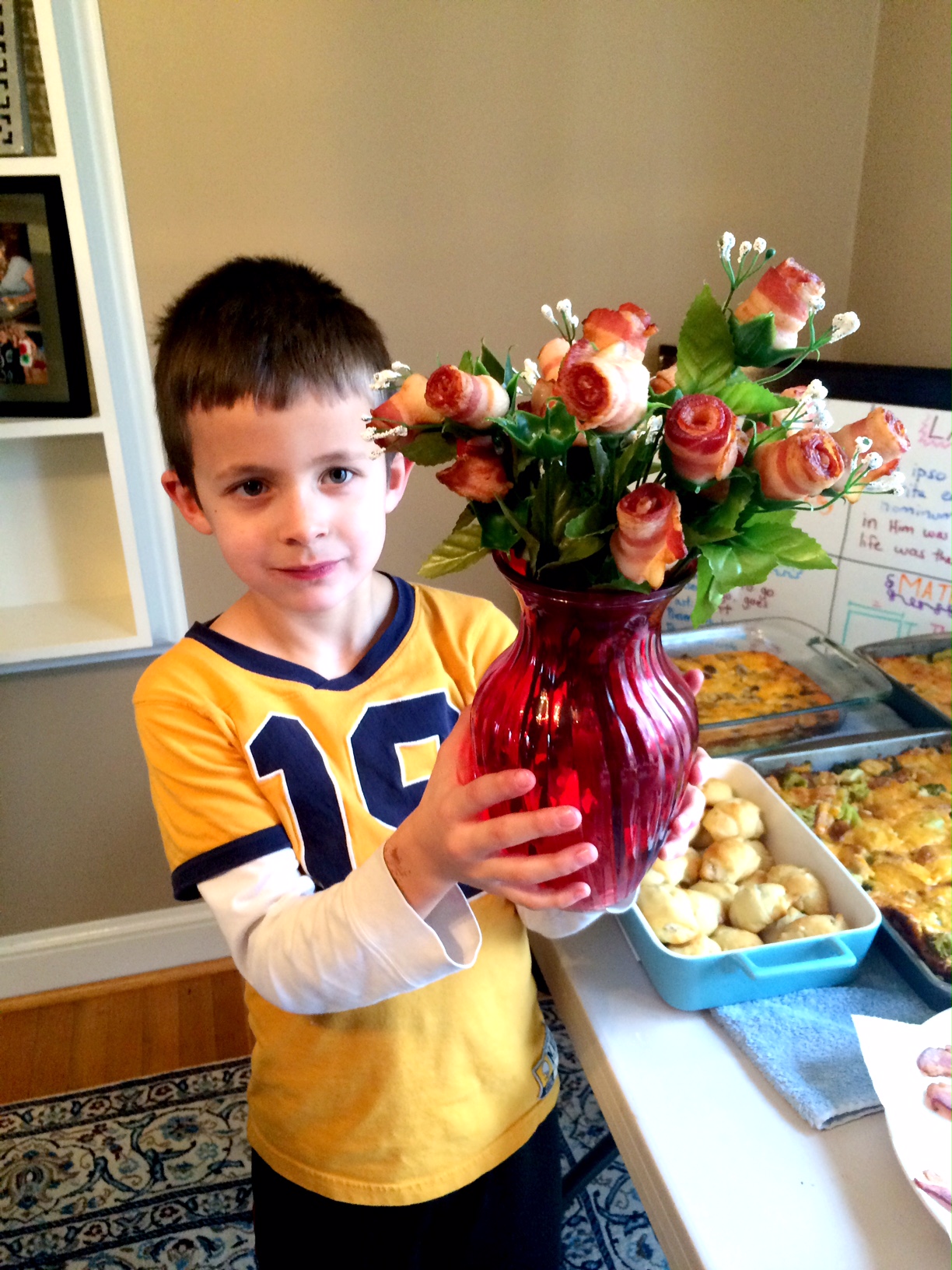 (Yes…… Those are BACON roses….. I have ridiculously talented friends!)

Not surprisingly, its only Monday and they seem to have forgotten EVERYTHING last week SHOULD have taught them, so I have a feeling parole could be revoked in the very near future!