Having spent their entire childhood to-date either in Texas or Virginia, my boys have never experienced snow like I did growing up.  From the age of 5 until 13 I lived on the shores of Lake Michigan, and had a front row seat to lake effect snow that many only ever read about.  I’ve walked over a mile out onto snow encrusted frozen whitecaps, and jumped off the roof of my second story house into snow drifts that covered the first story.  I have told my boys these stories.  They think I’m something of a legend when it comes to snow, as a result.

I’ve never really been challenged to defend my title in this area, as the snow we’ve seen here might measure a few inches at best, but then a follow-up 50 degree day quickly melts it all away.  Not so, today.  Last night we got a fairly decent amount, by Virginia standards…. a whole 6-7 inches in one night!  Everything is closed…. Everything…. and all my Michigan friends roll their eyes in disgust.  The outlook for the week is continued temperatures below 32 degrees, with possibly a few more flurries, so the boys threw down the gauntlet and asked for my help building a fort…. “Like I used to.”…… “Please mom, you’ve done this before”……

Sure guys…. I’ve done this before…. WHEN I WAS TEN?!?!  Back in the good ‘ole days when I was limber, and jumped around everyday for a living and therefore had muscles I was too young to even know about.  Also…. I wasn’t 29 weeks pregnant…. but ya’ know whatever right, because I’ve done this before…. must be like riding a bike or something.

I started suiting up, at which point Kevin, who was working from home, for the aforementioned reason EVERYTHING IS CLOSED came up to remind me I was pregnant, and therefore CRAZY to think I would shovel the driveway on my own.  Bless that wonderful man.  So out we all went.  I really was disastrous looking.  After 10 years of living in the warmth, I have no gloves, and my winter coat would not zip over my belly so we just let ‘er fly… and boots?!?  Sure, if you count my decorative high heeled boots, or the crocheted sock looking like ones, but not so much for trouncing through the snow, so tennie’s it was!

All the boys got in on the shoveling…. I took pictures, and managed the walkway to the house and the stairs. 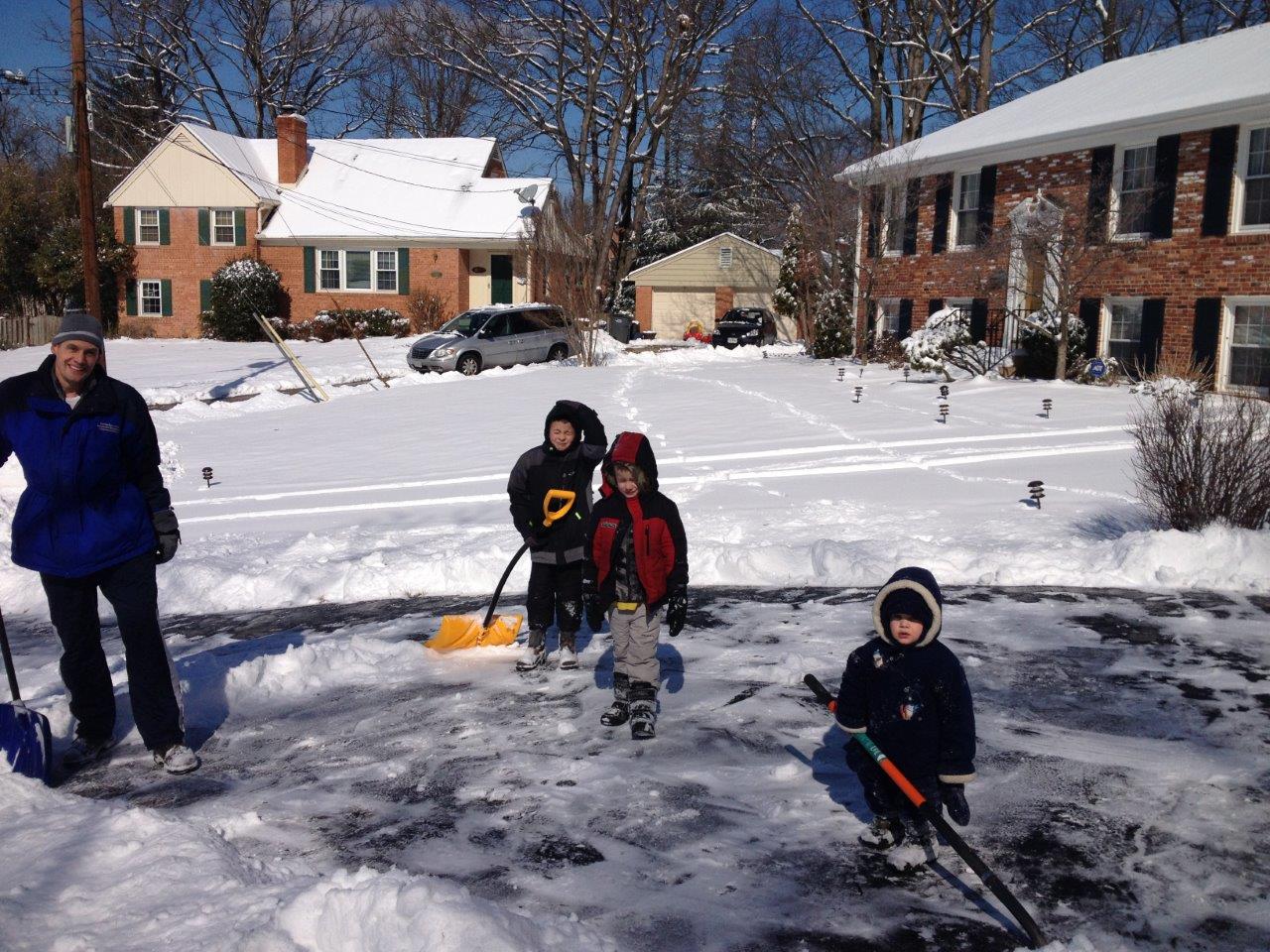 Kevin had to get back to work after that 45 minute interlude, but the boys were not yet satisfied that no fort had been made.  I tried telling them to have at it, ‘do your best’.

“Buuuuuut Moooooooom….. You know what your doing.  Please, will you just help us for a little bit.  I’m sure your’s were SO cool!”

Well….. I mean…. Yes.  I’m obviously an expert at all things.  My voice of reason (Kevin) had already disappeared from the scene, so I grabbed a shovel and we set out for the pile of snow at the end of the driveway.  “It’s imperative boys, that you look for the biggest pile, its much more efficient than starting your own base from scratch.”  The words of an expert talking right there.

Roughly an hour later of digging, and scooping, up and down from my hands and knees through a winding tunnel we had birthed a masterpiece…. and thankfully it wasn’t my daughter.  Though she wasn’t feeling that far behind in that moment! 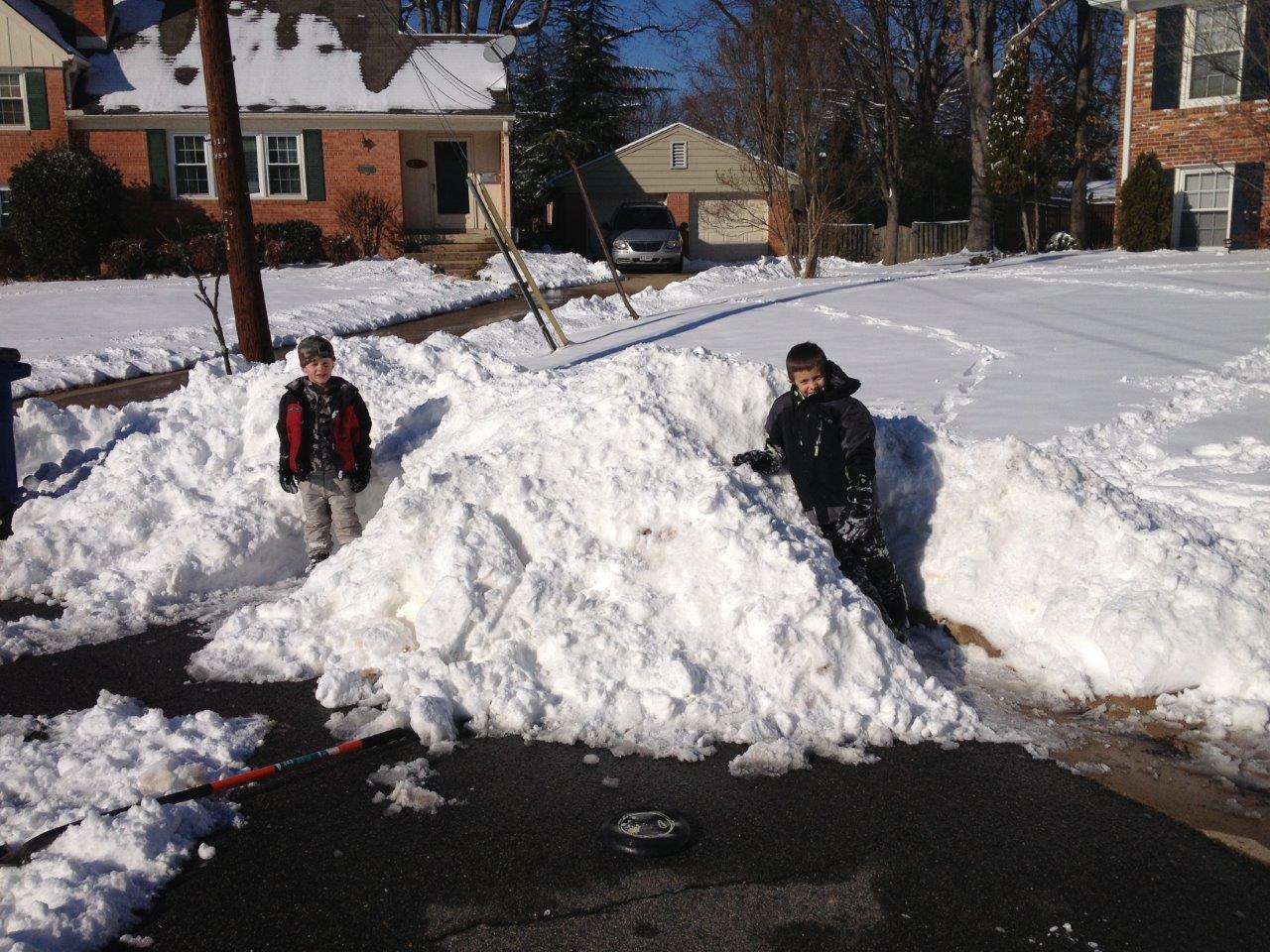 It doesn’t look like much on the outside, but both the boys are standing at their own entrances, and I promise you there is a labyrinth of intricate tunnels snaking their way through that mound…. Or just one that connects the two, but no judgment… that was an hours worth of work on my hands and knees, with no gloves, to defend my honor as an ‘expert snow fort maker’! 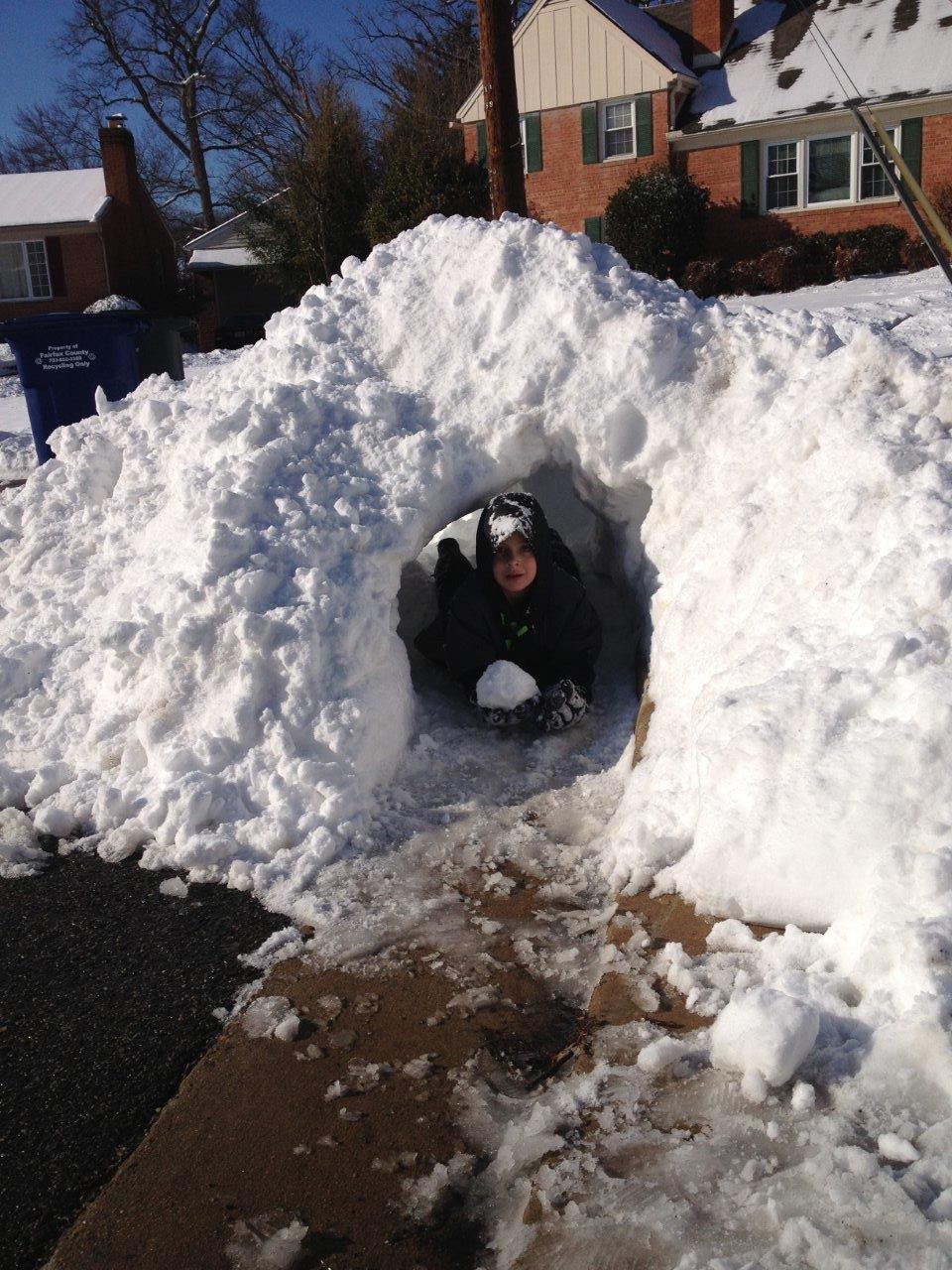 The tunnel DID open up into a ‘cavern’ in the middle… so that was something to be proud of…. Both boys could sit without having to duck their heads…. I mean its really nothing short of a miracle!

The reward for my efforts, has been 4 solid hours of them tweaking my masterpiece, but really who can improve upon perfection?  I’m sure their just out there in total awe at how amazing their mom is.   Meanwhile I’m sitting here wondering what in the hell I was thinking, and why I had to prove anything to a 4 & 6 year old?!?  It takes me a solid minute to stand up, my arms can no longer lift AJ, or really anything over about 5 pounds, and I’m moving at the pace of a 95 year old women.  So there’s that :).  Happy Snow day everyone!