It’s February… By very nature, it tends to be a boring month. People are still in the post holiday slump, not wanting to use up precious vacation so early in the year, and generally the weather is touch and go…. So what’s one to do, in an effort to add a little excitement to the monotony??? Well, when you’re as wild and crazy as I am, you tackle life’s major obstacles, navigating the unknown, tapping into faith and sheer determination to accomplish the task at hand…in other words, moving a 21 month old from the safety and confines of the crib we’ve all grown so comfortable with, to the freedom and adventure of a big boy bed! I know, I know… the build-up was hardly substantiated, but cut me some slack, parenting is a compilation of major milestones from the multiple firsts you make it through in the first year, to a slightly more spread out schedule as time progresses.

With junior’s impending delivery creeping up, Kevin and I had been discussing whether we wanted to brave the unknown and work Caleb out of the crib to avoid having to purchase a new one… but with SO many additional unknown’s looming on the horizon, we thought cutting the kid some slack and leaving one constant in his life might be appreciated. Well, Caleb seemed to have plans of his own. About a week ago, he started balking at us putting him in his crib, indicating he’d rather sleep in the twin bed in his room. Without a gate, I couldn’t comply… for the past 12 months at least, I’ve watched what can only be described as ‘contact sleeping’, where Caleb and his crib would wage a nightly war to see how many sides of the crib he could run into while sleeping.

The stage was set for Saturday night… I purchased the gate, and armed with the information gleaned from “Nanny 911”, on how to teach a toddler to stay in his bed, I was ready! Certain he would test his new found boundary and follow me out the door after books, I let him know big boys got three tries but if he couldn’t stay in his bed, I would have to put him back in his crib. Imagine my surprise when our first attempt was a SUCCESS!!! My surprise was immediately tempered by my overwhelming humility 😉 where I was the obvious hero, and my sheer parenting genius had triumphed! My ego was only slightly deflated when around 10pm we heard a telling ‘thrump’ upstairs, waited the requisite 10 seconds to move, sure tears were to follow…. Silence… 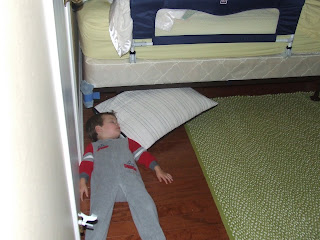 Went upstairs to find my parenting genius had allowed my little man to fall out of the bed headfirst, and somehow the little guy slept through the entire episode. I laughed out loud, got the camera to snap a picture, then lifted him back to his bed… Rinse and repeat about an hour later, when I learned I should lay him in a different direction so he doesn’t wake up with a nice concussion . Couple tweaks to the bed on Sunday, and I think it’s safe to claim victory over the crib!

In retrospect, I’m able to concede I was lucky as hell, and am thanking my lucky stars for the blessing that is Caleb and his demeanor in accepting change, holding out hope that with all the change yet to come, he’ll navigate it with as much composure.