I have dreamed about the first week back to school.  I’ve drooled over the pictures of mom’s poolside, jumping into a lake, or enjoying brunch with their girlfriends that first week, with their kids safely settled into a new school year.  I hold no illusions that the pictures from that first week back portray a life of leisure these mom’s indulge in throughout the school year.  At the end of the day they’re still mom’s, each with to-do lists a mile long, but there is that notable difference in how our brains function in the company of our children and without.  So seductive, that dream, to have an expanse of time,  days and weeks in succession, a whole school year with a semi-set schedule, where one can line up a to-do list and check things off one at a time with limited interruption. 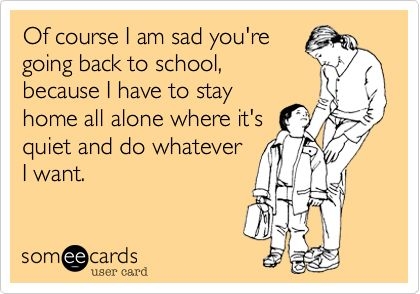 That was the plan when we moved to this area, public school.  Private had never really been considered, mostly cost prohibitive keeping it from consideration.  Truly, I’ve personally never had qualms with public school.  I’m a product of it, my husband, it’s a fine experience for me and countless others.  I’ve never fully understood why this was the ‘missions field’ I was called to walk down with my kids.  Traveling to the wilds of Africa, underground churches in East Asia, the ghettos of inner city America honestly sound much more appealing to me.  That wasn’t the ask I got.  So, for the last four years, I home-schooled to the best of my abilities.  It was absolutely a self-sacrifice, and painful at that.  My house and peace of mind seem to have bore the brunt of it.  Looking back, on the chaos of these last three months, it’s questionable whether I could have managed all the moving parts if the variable of school had not felt solidly defined at the outset.

He gives…. and takes away.

I had it.  Peace.  We were moving to a new area, so it only made sense to enroll my kids in the local elementary so we could find our tribe in our neighborhood with neighborhood kids, and fall in to life in the suburbs.  Writing that sentence makes me smile, because truly that is essentially my nightmare and God knows it.  So vanilla.  So predictable.  BLAH!

Apparently I needed that peace to get us to this spot, this truly God ordained spot.  He has better things than vanilla blah for me and my family.  If only I knew what that was.

The week after moving I set-up that coffee date with my friend’s cousin, the guidance counselor at our local elementary…. That very same contact that was instrumental in me feeling the peace that public school was all part of ‘the plan’.  She had to cancel on account of a migraine.   Within that first week, we were promptly and wonderfully welcomed and invited to that neighborhood 4th of July picnic where I learned in North Carolina there really is no such thing as your ‘local elementary school’ were ALL the neighborhood kids go.   There are ‘options’… OH SO MANY options!  There are traditional school, there are year round school (of which there are 4 separate ‘tracks’), there are magnet schools, and charter schools, and sure the private, and home-school options as well.   It would seem that each house in our neighborhood has found the option that works best for them, a very smooth spread across basically ALL of them.

And just like that my peace evaporated.  How was I supposed to choose, there were too many options.  I was basically in a ‘school daze’.  That next week a mailer showed up at my house advertising for an affordable classical academy called Thales.  It sounded like the answer to every prayer…. the what behind the WHY had I been homeschooling in the first place!  I hadn’t so much found Classical Conversations in VA, as it found me in a desperate state looking for a community of home-schoolers.  Our crew in VA was awesome, and now my ‘classically educated’ 2nd and 4th grader would get to matriculate into a FIVE DAY A WEEK SITE BASED SCHOOL with REAL teachers!  I was ecstatic.   Until I found out the school they were advertising wasn’t opening until 2018, and all the other campuses in the area were on an extensive wait list.  Oh how I tried to force my way into that option, seriously considering an hour commute one way twice a day to take the last couple spots in the one campus with openings.   Kevin questioned my sanity, and ultimately logic prevailed that it wouldn’t work.

I begrudgingly began to consider ONE MORE YEAR of Classical Conversations to bridge the gap until the school option would open in 2018.  I reached out to the local CC resource, and scheduled a coffee to meet and discuss signing up with their co-op.  Our meeting didn’t go as I hoped.  CC in the NOVA area was relaxed, flexible, we had to be, we had military families moving in and out of our communities often.  When I met with the leader locally, I explained my situation, that I was wore out burning the candle at every end, working and homeschooling.  I explained I hoped to bridge one more year until I could enroll at the school in the fall.  After listening to my transparent confession, she paused before responding, “Ideally we like to have families committed to homeschooling in our community, but I suppose we could make an exception for you.”

I was speechless.  It’s a Christian organization, CC, and here I laid it all on the table, a mama exhausted trying to make it one day at a time following where I thought the Holy Spirit was leading, and my yes for the year wasn’t enough.  It still seems backward to me…. It’s taken God every moment of these last four years, and likely still work to be done, for me to release my iron clad grip on making MY plans and sticking too them come what may.  This woman was essentially asking for an 16 year commitment that THIS was God’s path for my family…. I don’t know what 16 days from now will hold much less the next 16 years, and I’m just now beginning to enjoy the thrill of that rather than lamenting its horrors.  Even still, I was so laser focused on that 2018 schooling option that I was ready to ‘endure’ my year with them, certain I’d be getting plenty of side eye glances and knowing my heart would be thoroughly ‘blessed’ by these woman and not in the sincere kind of way.  I didn’t have any peace, but stubborn as all get-out, I started ordering the supplies and wrote out my check to officially enroll.

Since moving this way, I’ve had plenty of offers for connections with friends of friends that live in the area.  I’d been hesitant to act on any of them, not wanting the awkward pressures of a mutual acquaintance influencing how we might naturally feel toward one another.  However there was one contact, that turned out to live in my neighborhood, who also home-schooled that I decided to reach out to prior to turning in that check, ‘just to see’.  We met for coffee with our kids and had great conversation.   I confessed my botched meet/greet and apprehensions toward CC, and learned that I was not isolated in my experience that CC in this area was rather ‘intense’.   At one point she mentioned a new option, as if I needed more to consider, called University Model Schooling.  Apparently one was opening up just down the road, and she was going to sign her kids up for some of the Ala Carte classes, but she believed there to be openings for enrollment still as well.

My check for CC was due that day, but I raced home from our coffee to do as much research as I could before turning my check over.  It wasn’t the five day per week onsite schedule I’d been dreaming of, but it was two full days on site, and parents didn’t have to attend.  An improvement over one day parent attendance required at CC.  Curriculum looked solid, but I needed more info than the web could provide.  The website gave an email address for the woman launching the school, and a brief bio with a picture of her and her FIVE kids.  I drafted a DESPERATE email, the subject line was literally “PLEASE HELP”…. I’m not lying… all caps.  I basically, again, poured my heart out…. one mama to another.  Telling her I KNEW she had zero time, what with five kids and launching a school in a month, but if she could please please please reach out to call me anyway, promising I was much more cool and chill when I’m not moving to a new state trying to navigate all these education questions with August looming closer every day.

She called almost an hour later.  She got me.  My email spoke to her mama heart like I hoped it would, and everything she said was exactly what I wanted to hear…. AND she said by a fantastical twist of divine intervention if I was free that evening for coffee (again… always with the coffees) she’d be happy to meet and help me understand the vision for the school.  We met, and it was basically instantaneous peace again.  After ALL those options…. public, private, home school, this hybrid of all of it, launching for its inagural year just down the road from our neighborhood… This is where we were supposed to be.  Why?  I still haven’t the foggiest, it just is.

School starts on Monday.  We had our orientation Sunday night.  That feeling, now almost familiar, palms sweaty, peace filled and anxiety ridden simultaneously, heart racing.  One step of obedience, one day at a time, one foot in front of the other, an exhilarating journey before us.  For some mama’s the step of obedience is letting them go, when you want to hold on…. for other’s it’s holding on to them, when you thought you wanted to let go just a little.  Either way, these steps of faith, sometimes painful and self sacrificing as they may seem, pave the way to greater adventures than we could ever imagine… not only for ourselves but for the loves we’re guiding along the way.

As much as ‘my’ preferences and plan may have differed from where I find myself, experience has taught me that divine alterations to my plan often result in my greatest expressions of gratitude in the future, when divine perspective can cast its shadow on my past.   Sure my house and peace of mind are taking a beating now with so many small people underfoot needing guidance and direction about all the things, interrupting my plans at every turn, but one day I know I’ll look back and treasure the fruit that comes from all of this extra time we get to spend together, building a foundation that will stand come hell or high water. 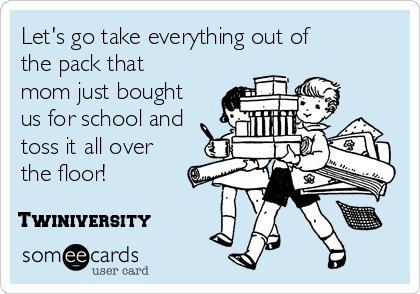 Praying for all my mama friends, teachers, and our kiddos…. Whatever our individual set-ups look like…. for the year ahead: That we have eyes to see, ears to hear, and willing hearts to follow the plans He has for us… For hope and our futures.  Love YOU!