Mom dating.  It’s a thing.  Plenty of ink has been spilled over it, by writers better than myself.  For the majority of my ‘moming’ years thus far, I’ve enjoyed the comfort and confidence I was able to draw from a solid community of friends, some mom’s, some not, that were all right around me.   Sure there were new ‘mom dates’ I’d experience from time to time as people moved in/out of the Norther Virginia area, but I got to do it with the peace of mind that I had a solid crew to fall back on…. There wasn’t much skin in the game for me at the time.

The tables have turned friends, I lost my ‘home court advantage’, and I’m here to tell you, do NOT underestimate the anxiety that comes with sticking your neck out on the line for the very first time (again).   Be kind to one another.  It is a brutal world we live in.

I am an extrovert.  By my very nature, I enjoy interacting with people, even strangers.  So it was a helpful reminder stepping out of my comfort zone this morning, to have even greater compassion for my more introverted friends.  It makes more sense to me now why people are choosing isolation over interaction, if I can feel my heart race ringing a doorbell for the first time…. Kids asking by my side, ‘what if we’re at the wrong house?’…. I don’t know guys, we run???  Just be chill, we got this, just be chill.   (Side note, if you ever say ‘just be chill’ twice, it’s a good sign that you’re NOT chill).

If you haven’t read it yet, my last post was about all the drama that went into us finding a schooling option for the impending school year.  It was an ordeal.  A major contributor toward our desire to move was finding a community that could provide the kind of childhood we envisioned for our kids, and a HUGE part of childhood is your schooling years and the friendships you make there…. So it was a big deal.  We had our orientation Sunday, our first exposure to the community we would be a part of.   There was already HIGH level anxiety for me going through that night, simply because it had all come together SO quickly, that I barely feel prepared to manage it all.  Toward the end of the evening they broke everyone up to go to their classrooms to meet their teachers.  I went with Logan, and Kevin went with Caleb.  I found myself standing next to this mom, feeling like all the oxygen had gotten sucked out of the room, and just leaned over to break the ice with… “Am I the only one FREAKING out right now?”  Partly to break the ice, partly because I was legitimately worried that all these cool cats knew what the heck was going on, and I was feeling naked on the first day of school.  She gave me a short laugh, confirmed she was also freaking out, then we both faced forward to not get yelled at for talking during class.  (I ALWAYS get yelled at for talking during class… I’ve never been able to shut up…. ESPECIALLY when I’m nervous…. then I just talk MORE?!?)

We stood there in mutual freaked out silence while the new teacher gave her schpeel welcoming everyone, and eventually I saw Kevin and Caleb standing in the hall, talking with another father/son duo.   The older son came and started talking to the mom next to me, and as the 2nd grade teacher wrapped up, we learned that we both had a son in the 2nd and 4th grade classes…. AND our husbands were already talking (OF THEIR OWN ACCORD) in the hallway.

*Thinking to myself* Be cool Julie, just be cool, don’t show your hand too quickly…. this woman HAS to be your new best friend because your kids align in age AND gender, and the husbands started talking on their own.   Basically the holy trinity of friend factors, never mind that it could be possible her and I have nothing in common.

Ever the cool cucumber (and the fact that we had to get Kevin to the airport for a work trip), we parted ways with our individual families and headed home.

Then the head games begin…. Should I text her?  Tell her it was nice meeting her?  She probably already has a zillion friends and I’ll just be bothering her.  Do it for the kids, it will be nice for them to know someone on that first day.  Should I be funny?  Serious?  Keep it simple and short?  What if she thinks my short text is curt and rude?  What if she has an Apple, and I’m on Android and she’s annoyed that my texts come in all jumbly?

I finally land on a funny gif of a man trying to keep his head above water, basically drowning, and say “Was nice meeting you, would love to hang out sometime if it works, but completely understand if it doesn’t as I’m barely keeping my head above water over here on my own”.

More mind games… Was that funny?  Do I seem desperate now?  Thankfully she responded with a ‘haha, sounds great’ and a tentative plan for a Friday play date.  I respond back right away that Friday was great and we were looking forward to it.   Radio Silence.  Monday, nothing.   I convince myself I definitely came on too strong, I should have slow played the Friday playdate.  I try to remind myself she’s got kids, not everyone sees their texts everyday.   Tuesday Nothing.    She hated me, I’m an idiot, we should just move again, what’s the point in living here any longer.  She responds on day three, and I breath a sigh of relief that I don’t have to find a new school for my kids.

Totally woke up with butterflies in my stomach this morning, girl insecurities raging.  What should I wear?  Conservative?  Cool?  I couldn’t be hipster if I tried, so already had that working against me…. basically was torn between embracing mom top knot and work-out clothes (even though we all know I don’t work out), or real ‘I made a plan to leave the house today’ clothes.   On the drive over, I do the whole kid talk about being kind and share, remind them we’re going to someone’s house not the zoo, treat furniture and walls accordingly, and packed some granola bars so they didn’t have to embarrass me by asking for food every five seconds, like they haven’t seen a meal in weeks!

It’s the kids that really make me jealous for years gone by when we show up.  When did I turn into such a lump of nerves?  Why do I care?  The kids clearly don’t.  They were just pumped to have people around and literally all bounded up the stairs 30 seconds after we arrived, leaving us mom’s in the kitchen for some awkward this is our first date coffee.   It’s like nerves feed off each other, but leave it to me to lead with awkward and break the tension, calling a spade a spade.  “Soooooo…. you’re my first mom date in the area”.  (I mentally hand palmed my own forehead…. could there have been a more lame intro?!?) However, it apparently worked to cut the tension as we both awkwardly laughed, got our coffees and sat down to get to know one another.

Two hours flew by in the blink of an eye.  The kids got along so well there were minimal interruptions, and turns out she and I actually DO have a lot in common, only adding to my friend crush.  We even made it so far on our first date to discover neither family thinks alcohol is from the devil….. which is essentially the equivalent of rounding first base, when you don’t have to deal with THAT awkward mind field at your first afternoon/evening gathering?!?  Amiright!  Because I love people as much as I do, I basically want to be this woman’s sister wife now (but with our own husbands, cause weird).  She was so fun, and cool, and all the things, and I just want to move in and drink our wine while watching our kids from the patio and encourage each other every day that life is going to be ok, and never have to try to meet another person again, because that took more emotional energy and anxiety than I had budgeted for.    BUT…. I’m fairly certain, even though its been awhile since I’ve seriously ‘dated’, that telling someone you want to be their sister wife MIGHT be a little abnormal and over the top(ish)…. Just a smidge.

Thankfully, we totally already have a 4th grade family mixer pizza night tomorrow, so I could be all chill as we were leaving, like ‘yeah, we’ll see you when we see you… oh wait, tomorrow night, so funny I totally forgot.’

It is LEGIT dating y’all….  Like the exact same I engaged in basically 15+ years ago to land Kevin, and THAT WAS NO EASY TASK.    Sure he loved me, so it all worked out…. but my nickname before Kevin was ‘the black widow’ because I essentially tanked every relationship prior to that with my awkwardness.  I laughed in the face of the first guy I ever kissed, because it ‘felt’ weird.  He broke up with me later that week.   Apparently in girl dating its endearing to some, because if I’m the MOST awkward person in the room, it puts other people at ease that thankfully they aren’t as weird as me.  Essentially, if I have enough girl insecurities for the both of us, then they get to feel all secure and superior…. and I’m convinced I’m the only one fretting about when is too soon to text that I had a great time?!?

Kevin just shakes his head and laughs at me, and my friends (all now far away) remind me that if I don’t manage to scare them away at the outset, it’s TOTALLY worth the effort. So here’s hoping my brand of crazy finds its home down here…. and soon, or I’m gonna need a prescription of Xannax to medically induce a chill I’m seemingly unable to cultivate on my own! 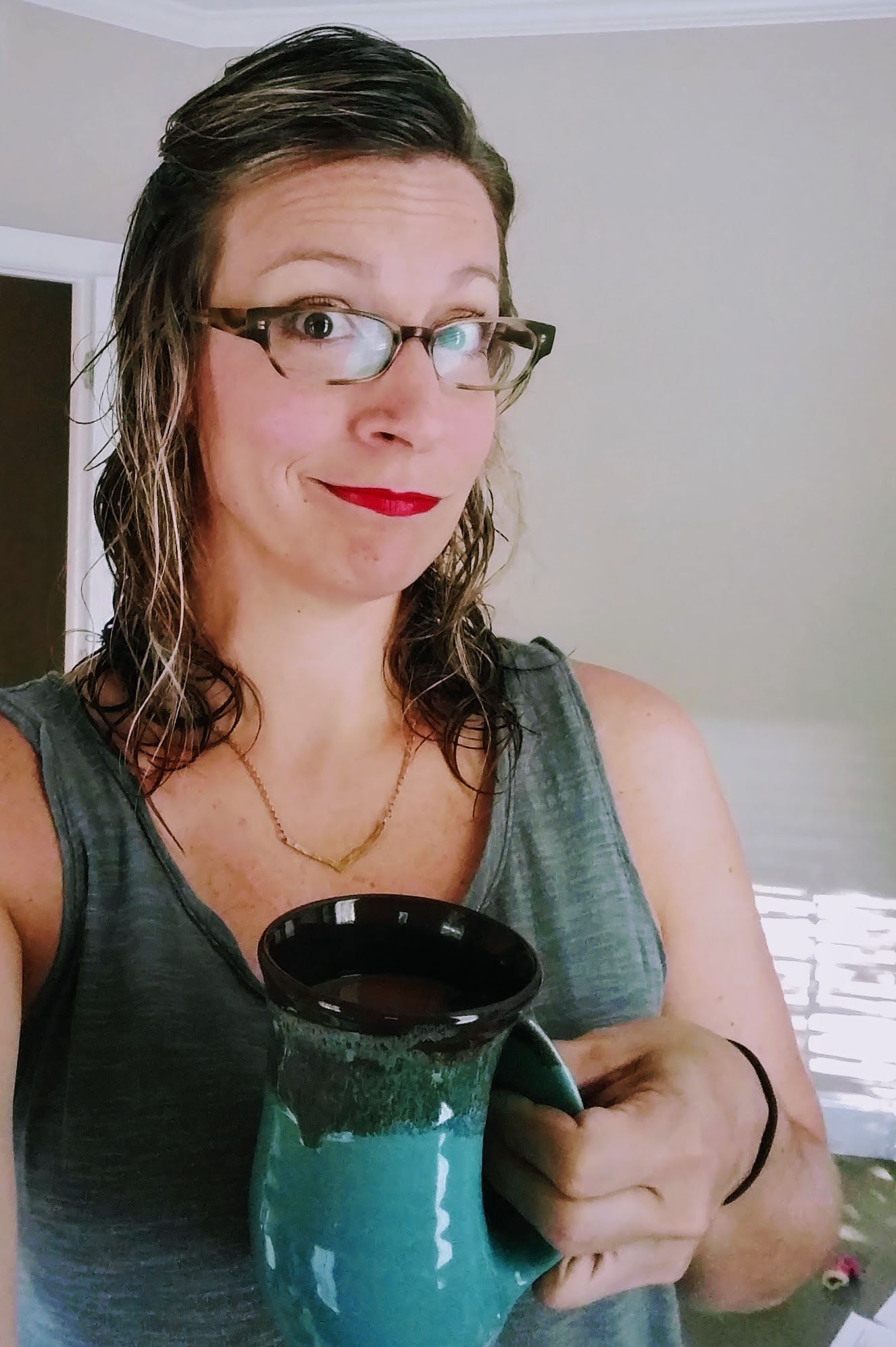 (Note to self…. Maybe don’t have a cup of coffee BEFORE your coffee play date…. it will help in the overall goal to be more chill and zen like)