I LOVE Thursday, for the singular fact that on Thursday an angel descends upon my household and entertains the littles for a solid eight hours.  EVERY WEEK!

Since moving to the NOVA area, our childcare situation has always been rather fluid.  In the five years we’ve been here, we’ve had 4 providers cover a span of ~4 years of care, and for the last year (by the grace of God) I’ve managed to keep the wheels on by myself.  How, or maybe a better question would be WHY, God is making this all work out is beyond me…. and truth be told I’m not ALWAYS thankful He’s keeping so many plates spinning at once.  Part of me doubts His confidence in me to keep them spinning, though I know ultimately if I just continue showing up and doing the next right thing, they’re never in my hands anyway.  However, the fear remains it will all go horribly awry…. I’ll ruin my kids education trying to Home School, at which I’ve NEVER felt qualified, and/or make an absolute fool out of myself at work either by missing an important deadline, or forgetting to mute my telephone on a conference call when the kids decide to lose their mind (which has happened, thankfully only once in five years).  Then there is still the matter every mom struggles with, am I engaged enough, too much, am I still an attentive wife, are appointments being made and kept, is the house managing to hover just above being declared HAZMAT territory, am I feeding them well enough, etc???

On Thursday I get to come up for air.  I’m fairly certain every mom, no matter the plates she has spinning, needs time to come up for air.  It will look different for EVERY mom, depending on her situation.  I don’t know how to make it work for everyone else’s situation.  What I do know is that, around here, Thursday’s are critical.  It’s the day when all the other voices stop, and for a few solid hours I’m able to catch up on whatever started falling through the cracks since last Thursday.  Generally that means getting caught up on work, attending to any appointments that would be easier without my traveling circus in tow, and putting the house back in some semblance of order.  Some days it also means laying in my room for most of the day, doing work, writing a blog, and maybe watching an episode of something useless on Hulu.   That’s the beauty of Thursday…. I get to pick what needs my attention MOST, and sometimes the answer to that is ME.

I’ve never understood martyr mommies, the ones quite literally trying to sacrifice themselves at the alter of motherhood.  If you’re killing yourself to be everything for every body, at the end of the day you’re dead…. and by definition…  dead is quite useless.  Ofcourse, there are hundreds of sacrifices to be made, and in most cases we end up making them without even thinking about it, out of the inexplicable love we have for our littles.  However, if in the course of a week you’re not able to find a few hours to come up for air, clear your perspective on everything, and find the joy in everything you are doing again, I think it at least begs the question what force is driving you that hard? Its one thing if its a tough season, and you’ve got to solider through for a few months…. its entirely other if ‘soldiering through’ is the norm.

Tuesday was tough.  It took Cub four hours of whining to make it through one worksheet of Math.  AJ was extraordinarily clingy, and Logan just wanted someone to play dragons with him.  They seemed to be talking over each other ALL. DAY. LONG.    At one point we needed to make it to the grocery store to pick up some odds and ends for dinner.  It’s times like these where thinking about the two big ones in Preschool and 1st grade sounds SUPER appealing, as they opted to RACE the kid carts up and down aisles, while AJ continually tried climbing out of the cart.  I felt shame wanting to worm its way into my being at not having my children walking nicely by my side for a 15 minute stop at the grocery store, and felt guilt hot on its tail for losing my patience in response to them being boys with a lot of energy on a grey rainy day.  When we finally made it back to the car, I couldn’t find my car keys, and thought they’d fallen out of my purse at some point in the store.  So I left them secured in their seats to hopefully run in and find them quickly, at which point a well meaning petitioner asked if I could ‘chat for a minute’ about their cause.   I don’t like ignoring people.  I try my best not to be rude.  They are an individual, and deserved to be acknowledged, and I hate it when my day seems to get so far out of control, that I don’t feel able, at a minimum, to acknowledge their comment with something other than a curt response.  On Tuesday, they got a curt response, “I’ve got three kids in the car and have lost my keys.  No, I do not have time to chat.”

Wednesday’s aren’t that much quieter.  Our morning is spent at the Classical Conversation Co-op from 9-12a.  I’m SO thankful for the structure and guidance that community has provided for us to navigate this school year with.  However, it does result in anxiety when we’re driving home and I’m wondering if my boss was trying to contact me during those three hours and what work I need to catch up on as soon as we get home, right when everyone is starving and demanding to be fed.  Thankfully the weather was better yesterday and while AJ slept the boys could play outside.  That sounds ideal, however is STILL something that requires training, as the door opens every 10-15 minutes with a question about SOMETHING.  Can we have a snack?  We’re thirsty.  Can we change into shorts (it was only 60 degrees)?  I’ve got to go to the bathroom.  After negotiating about 2.5 hours of quiet to catch up on a few critical work updates, I managed to head outside to be a witness to their shenanigans.  They always want an audience, “Mom, look!”, I hear it all day long.  I’ve been working with Logan to get him up on his two wheeler without training wheels, and he wanted to show me his skills.  I quickly realized the skills were limited to a one direction circuit around the cul-de-sac.  When I tried to encourage him to make a figure eight, and work on turning the other direction, he dissolved into a fit of tears and fear.  When this happens he tends to lash out with yelling and screaming at me about how he CAN’T do something.  For the better part of a half hour we went toe to toe.  In my opinion there are times to let fear alone, walk away and try again later, but there are other times when you stand your ground, and demonstrate authority over fear.  If you can ride your bike in one direction, like a pro, learning to turn the other direction is one of those times to learn the lesson that you can FACE a fear and defeat it…. and we did! 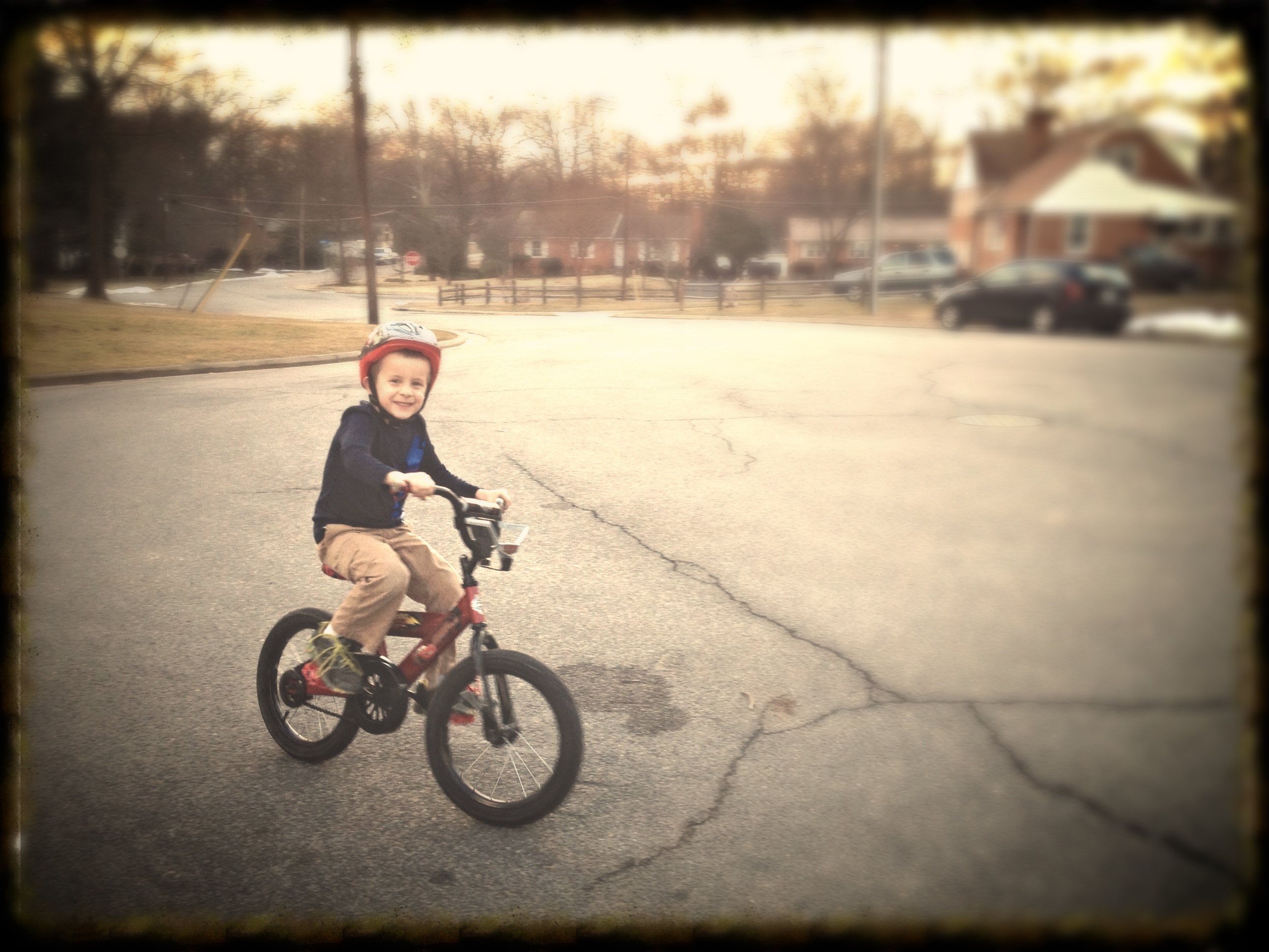 So this morning, I’m taking this hour to re-set, to be SO ridiculously thankful that someone else is attending to the arguments I can hear in the other room.  I’m taking time to remember what a miracle it is that we’re FOUR weeks from the end of our first school year in CC, and sitting for a moment in amazement at HOW MUCH my kids have learned.  As tough as it is some days, I’m thankful that I’m the one teaching them because I know together we’re learning more than academic subjects, we’re tackling battles about fears, character development, building their integrity, and setting their confidences on firm foundations. Today I’m thankful for the ability to take my conference calls without interruption.  I’m thankful that its another gorgeous day and I can get a few things actually CLEAN while the boys are supervised and not making an even bigger disaster where I can’t see them.  I’m thankful they have so much FUN with Desiree, and Thursday’s are something they look forward to as much as I do.  I’m thankful that in the midst of ALL of that, I get to feel the intermittent nudging reminders of new life growing and remember that the perpetual chaos we’re living in is so good and meaningful.  Our navigating all of this together is creating a fabric of memories woven tightly together of mutual sacrifice for the greater good.  Not ONE of us get’s everything we want, but God has been SO good to provide for our every need.  I needed THIS hour, this week!