If you haven’t read this, you don’t know about the little project I’m undertaking through the end of the year.  I’m taking time to remember the miracles that have occurred in my life, to remind myself that God is very much in the details and cares about even the smallest components of our lives.  If in the process I’m able to remind another about the miracles He’s accomplished in their life, that’s awesome too!  ‘Tis the season for remembering miracles!  You can find my first post, entertaining angels, here.

February will mark my ten year anniversary with Dell.  How I got this job is another fun story of God working all things together for my good!

I’d like to say I researched my University of choice for its reputation in the degree program I sought.  HA!  I was ready to par-tay, and Michigan State was just the place for me!  My degree more or less picked me.  Science was ruled out for the simple fact it bored me to TEARS, I didn’t have a particular affinity or patience for teaching, and without much creativity, I landed in the Business college.  I tried most of the specialties in the business college: marketing, accounting, and finance before discovering we had this new specialty called supply chain management, which we were apparently #1 in the country for.  I figured being #1 at something sounded good, and declared my major.

Fast forward to my last semester in college.  Kevin and I had been dating for about 2 years at that point and on homecoming weekend he popped the question!  Like any self respecting 21 year old I gawked at the bulging diamond on my left hand and thrust it in the face of all my girlfriends, completely bewildered that I was ENGAGED?!?!  I didn’t give one thought to what that tiny little accessory would say to potential employers as I began the long and arduous road of interviews set before me that fall, and because of those strict HR rules, they didn’t ask either.

Thirty Eight companies later.  Yes…. 38….  I was completely deflated.  I had interviewed EVERYWHERE.  I’d taken IQ tests for Abercrombie, sat across from a T.V. screen and recorded one for Pepsi, even flew down to Richmond for a second round with Philip Morris.  Every single company turned me down.  I was totally perplexed as my peers with lower GPA’s and fewer extra-curriculars continued to get snapped up around me.  Looking for guidance I turned to the career counselors.  His first question was when I got engaged, and then followed up with if I’d been wearing my ring to the interviews.  I told him I had, not thinking anything of it, and in not such an obvious way, he told me to ‘stop it’.  Apparently engaged at my age screamed undependable to prospective employers.  I was an investment not worth investing in because at some undisclosed point down the road I would quit to have babies, or relocate on a whim for my husband.  They couldn’t ask the questions that would absolve me of those stereotypes so they were opting to play it safe, and I was none the wiser.

I talked with Kevin, and we agreed taking my ring off for the two remaining prospects I had left made sense. The only two interviews I had left were with Frito-Lay and Dell.  Frito-Lay’s position was for 2nd shift warehouse manager in Detroit.   Can you guys even imagine that?!?   I was imagining 8mile, at night, in a warehouse, being a little blond haired naive manager, and figuring I’d probably die in my first week or something.  Not trying to be pre-judicial, but it was my 21 year old brain at work…. stereo-types ran rampant for me then.
The only other option was Dell… and after 38 rejections, my confidence for landing a job at the company that I’d spent the better part of the last 2 years studying in case-studies for their infamous supply chain was pretty low.  It didn’t help that the second round interview required me to fly to Austin, and the return flight only gave me a 3hr buffer to make it to my graduation ceremonies.  I made it there and back for the interview, and readied myself to wait the 2-3wk window for feedback.

Two weeks passed, no news.  I sent an email to a buddy that had flown down with me, only to learn he had received an offer.  Frito-Lay contacted me, and had chosen another candidate.  I moved home, and went back to work, with my college degree, as a waitress at Bennigan’s.  Three weeks passed, no news.  I sent them the obligatory note, thanking them and letting them know I was still interested.  No response.  Four weeks.  Five weeks.  I sent them another semi-polite note at six weeks.  No response.   Then one night, two months after my interview, I was laying in bed and I was pissed.  No responses, I gave them my time, I almost missed my graduation, and to get nothing in return was just rude.  Figuring I’d already lost the job and they were just too inconsiderate to let me know, I figured I’d send one more email.  It went like this:

To Whom it May Concern,

I know I am qualified to do the job you have asked.  Whether or not you want to hire me is up to you.  I would appreciate a response either way.

The next morning when I woke up I had the generic response, I’d grown so used to seeing, in my inbox.  They thanked me for my time and would keep my resume’ on file for a year.  It didn’t really bother me at that point, seeing as it was the response I’d expected, so I went about my day flower girl dress shopping with my little niece.  While at my soon-to-be Mother-in-law’s house, I got a phone call.  Dell wanted me.  There had been a mistake in H.R. and my email the night before had alerted the hiring manager to the lapse.  They let me know an offer letter was in the mail, and looked forward to my response.  I think the lady on the phone was questioning their choice as my voice couldn’t possibly have climbed another octave higher as I profusely thanked her.

Had I gotten a single offer, no matter HOW sad the prospect was, prior to that moment, I would have taken it out of desperation.  Had I taken my ring off earlier in the process maybe that would have happened.  Had I not sent a middle of the night random email, H.R’s lapse might have gone unnoticed indefinitely.  The waiting, the rejections, the ring…. it had all worked together to land me my dream job!  Miracle! 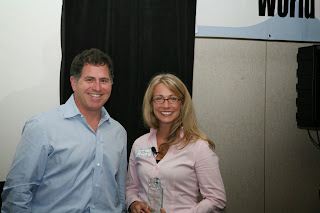 God opened MANY doors for me at Dell, putting me on a project that allowed me to travel to Ireland, Singapore, and Italy.  Enabling me to obtain a patent for my project work, get published in an M.I.T. case study, and present to Micheal Dell himself!

All of this coincidentally laid the very foundation for what I will build upon….. tomorrow 🙂