If you haven’t read this, you don’t know about the little project I’m undertaking through the end of the year.  I’m taking time to remember the miracles that have occurred in my life, to remind myself that God is very much in the details and cares about even the smallest components of our lives.  If in the process I’m able to remind another about the miracles He’s accomplished in their life, that’s awesome too!  ‘Tis the season for remembering miracles!  If you wanna catch up: Miracle #1, Miracle #2

Hindsight really is 20/20.  As I’m writing about the miracles we’ve experienced, its hard to see where one stops and the next one starts, as everything is intertwined to achieve an outcome we still cannot see or understand.  Getting hired at Dell and relocating to Austin was just another step.

I grew up Catholic.  We experience life through the lenses we’re given, and for a long time my only view of religion was through the lenses of Catholicism.  We didn’t have ‘relationships’ with Jesus, we believed in Him, but we prayed scripted prayers to Mary or the Saints, and sought absolution from Priests, that’s just how I understood it.  We didn’t need to read our Bibles, because it was read to us and explained to us on Sunday, by someone who dedicated their life to make sense of it, we weren’t expected to understand it.  In my adolescent understanding, the church had existed forever, would continue to exist forever (with or without members), and giving was optional depending on if you had some spare change in your pockets or not.  It had always been fun on Sunday’s when my mom would hand each of us girls a couple dollars to drop into the offering plate when it went by, I only ever saw the small bills pass as the plate went by and accepted that was what giving to the church looked like.

It would take COUNTLESS teachings before I would ever even begin to question that understanding.  In truth I didn’t want to.  I was POOR in college.  My parents helped with half of the overall tuition, but the other half, room/board, books, food, and any other expense were on us.  At the time, when friends were getting it fully funded with access to a bank card that hit their parents account whenever they needed it, I thought I was getting a raw deal.  Now I’m thankful (yes, Mom and Dad, thankful) for the money management skills it taught me.  I didn’t have a car, I rode public transit or walked.  I didn’t have a cell phone or a computer, I wrote my papers at the computer lab in the library.  I ate pancakes probably 4 days a week because my dad worked for Krustez, and I had coupons for free mix that required me to add water.  My other meals were usually on shift while waitressing at Bennigan’s.  I lived in a Frat house (yes, you read that correctly) the last semester I was in college, because the cost of the room for 6 months (all utilities included) was only $800 (10 years ago).  I’ll write more about THAT experience some other time!  So when I got hired at Dell, it was all to easy to see that as something I had worked MY butt off for, and the fruit of the spoils were all mine to do with as I pleased.  With our wedding to pay for, Kevin starting school, and buying our first home, there were always plenty of places for the money to go.

Since giving wasn’t discussed much, or at least that I remembered while growing up, I took immediate offense the first few times I heard teachings on it.  How dare they, I was always told it was rude to ask people for money.  However, slowly my defenses began to drop, the messages became less offensive and more convicting.  We were FINALLY approaching the end of Kevin’s degree.  Had God not brought us to Austin through our relocation for Dell, Kevin never would have been able to attend The University of Texas and gotten his computer science degree from such a highly ranked school in his field.  Our blessings were undeniable, we’d survived a few very tough years of marriage, had Caleb and were pregnant with Logan…. However, Kevin was now experiencing the same drought I had, as he went on interview after interview looking for employment post graduation.

Leading up to the holidays in 2009, our church gave a message based on Malachi 3:10, essentially that we are to bring the whole tithe (our first 10% of our income), and that this one command was the only time in the entire Bible, that God encouraged us to ‘test Him’.  I mulled it over for awhile, and decided that my New Years resolution that year would be to test Him.  Kevin needed an offer.  I remembered how depressed I had been walking through so much rejection, and I could see it in him…. what did I have to lose?

When we got back to work after the holidays, I set up my direct deposit on a Monday.  Kevin got a call from Oracle that Wednesday.  He had interviewed with them in OCTOBER…. it was January… and he heard nothing from them until two days after I decide to ‘test’ God?!?  Dead serious.  I was shocked.  Kevin even mentioned that given this offer would require a cross country move, maybe I should pull the direct deposit so we could save.  I think I told him I didn’t want to get struck by lightning, so I wasn’t touching one red cent.  After that a couple other offers came in that tempted us to think about staying, we could have made more and lived at a lower cost of living, but we just knew that it was an adventure we had to take.

Since taking the plunge and moving all the way out here, the INSANE cost of living makes it tempting to pull back sometimes, however God continues to prove the exact opposite true.  He’s challenged us every year to give even more with miracle offerings as our church continues to grow, and every year we step out in faith He has exceeded our expectations.  When we first moved here the 4 of us crammed into 728sq ft, a year later we doubled that, and just this past summer we increased it again, all without compromising our location too much, and our housing budget hasn’t changed either.  Both moves were crazy miracles of their own…. the first move we were picked out of a 20 person lottery to get the house, and this new place was a needle in a haystack Craig’s List find with no picture and only two sentences in the ad.  Normally I wouldn’t even give a listing like that a second look, but for whatever reason I sent a note, and here we are.
Testing Him with the tithe is a crazy miracle that I can’t explain, that I fought for a  REALLY long time, but as I watch it play out year after year now for the past few years in my own life, I can’t argue with it anymore.

Do you have a resolution this year???  Give it a shot…. test Him, what miracle are you waiting for? 😉 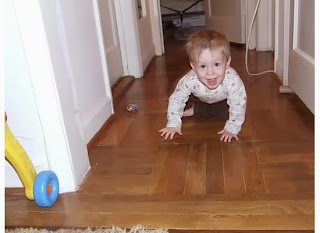 Logan crawling down the hallway of our first apartment when we moved out here.  The baby actually makes the apartment scale pretty accurate, as you can see roughly 90% of the place right here.  Back bedroom for the boys, our room to his right, the bathroom to his left, and a 10×10 living/dining room just in front of him…. you just got the whole tour!


What happened 24hrs after our move to Alexandria was one of the scariest tests of faith of my life, but also paved the way toward one of the top two miracles I’ve experienced as well!  More on THAT tomorrow….
My life isn’t exactly a major cliff hanger, so I gotta build up suspense where ever I can 😉