If you haven’t read this, you don’t know about the little project I’m undertaking through the end of the year.  I’m taking time to remember the miracles that have occurred in my life, to remind myself that God is very much in the details and cares about even the smallest components of our lives.  If in the process I’m able to remind another about the miracles He’s accomplished in their life, that’s awesome too!  ‘Tis the season for remembering miracles!  If you wanna catch up: Miracle #1,Miracle #2, Miracle #3

If you’ve never driven across the country with a 3 month old and 2 year old, I don’t recommend it.  The drive from Texas to Alexandria took us 27 hours, required 2 nights in a hotel, and about nearly did me in.  Caleb was just beginning to expand his vocabulary and wanted to try out his words the ENTIRE way.  I’d never been so happy to arrive some place in my entire life!  Kevin had made a solo trek out a couple weeks prior with all of our furniture and set up our new place so when we arrived we decided to spend the rest of the day walking through Old Town and exploring our new city!  Thoroughly exhausted from the trip and our adventures of the day we got home and started to get jammies on for our first night in our new apartment. 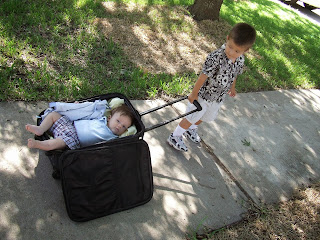 I can still picture every detail of what happened next.

At 3 months Logan was just kicking his feet in the air as we worked to get Caleb’s pajama’s on.  Caleb was jabbering away about something when suddenly he just stopped talking, walked across the room, directly into our entertainment center, and then crumpled into a pile on the floor.  I called his name and told him to stop messing around, that we weren’t done getting his pajama’s on.  He didn’t respond.  I walked over to where he was, he was just staring at the ceiling.  I called his name again, and then out of no where his whole tiny two year old body started convulsing and seizing.  I screamed for Kevin who grabbed him and held him, trying to get him to respond, and I started to call 911.  I didn’t even know our new address yet when they asked for it, I had to scramble to find our lease with the address on it to make sure I got it right.  The longest 3 minutes of my life later, I could hear the sirens in the distance, and the seizing had stopped but Cub was still laying unresponsive in Kevin’s arms.  When the paramedics got into our apartment he was just starting to come to, very disoriented and very groggy.  They loaded him and Kevin into the ambulance, and Logan and I followed them to the hospital.  I’ve never felt more scared or helpless in my life. 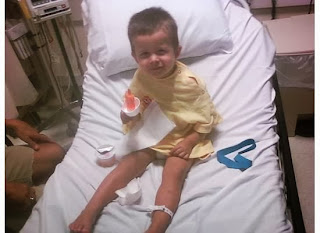 Enjoying a Popsicle in the ER after about giving his mom and dad a heart-attack!

The diagnosis at that time was the stress of the move, the long road trip and sitting in a car seat for that long, was simply too much and this was his two year old body manifesting that stress to release it.  They didn’t expect it to repeat, and after the tests they ran in the ER confirmed that overall he was healthy, they released us.  That week we googled churches in the DC metro area, to see if we could find one to try out that Sunday, and at the top of the list was “DC Metro Church”…. We figured we’d give it a shot.  We enjoyed our first Sunday, everyone was friendly, it was close by, seemed like a good fit.

The next Sunday, as we were getting ready for church, the chattering coming from the boys room suddenly went silent and I heard an ominous thud.  I rushed in to see Caleb seizing for the second time in just two weeks now.  Understanding just slightly better what to expect, and not wanting to subject him to another round through the ER after the doctors had told us what to do if it happened again, we rode it out and laid low for the day.  Over the course of those 5 remaining months of 2010 Caleb had a total of 9 seizures.  After the third one, I’d made an appointment with a Pediatric Neurologist to understand what was happening, and Caleb was diagnosed with Epilepsy, which was defined as the occurrence of more than 2 unprovoked seizures.  The Dr. recommended a drug that Cub would need to take daily for a year minimum, and she said a common side effect was that their personality and overall demeanor could change given the drugs direct effect on the brain.  As a mom, it was a treatment plan I just could NOT wrap my brain around.  My child was 2.  I was JUST beginning to meet his sweet little personality as he emerged into toddler-hood, and the thought of changing that with a narcotic left me incredibly uneasy….. but what choices did I have.  I asked if the occurrences of the seizures were damaging to Caleb in anyway, and the Dr. assured me that because of his age all but ensuring an adult would be present or near him at all times and able to respond immediately when one occurred, the actual seizures themselves did not hurt his brain, it was the risk of hurting himself while his body seized that was the bigger concern.  I decided to hold off on the daily drug while I researched alternatives.

As we started the New Year, our new church introduced us to their tradition of starting the year with a 21 day corporate fast.  I’d grown up with lent, so I understood the concept, although I don’t think I was ever actually successful in abstaining for the full 40 days from whatever I choose to give up.  This time, the stakes were higher.  I was helpless to end the seizures on my own, and if I was going to ask for something as important as healing my son, I better dang well be ready to not cheat or complain about not having a few of my favorite foods for a couple weeks!  During the 3wk fast, they had a few evenings services of Praise & Worship, and at the last one they asked people to come forward if they were specifically looking for healing.  At that point, I was still not really comfortable with the idea of ‘sticking out’ in a service.  I much preferred blending in, but Kevin gave me the look this time and told me he was going to get Caleb out of children’s ministry.  We brought him to the front, and our lead Pastor and his wife prayed over Caleb and then we went back to our seats.  Another little girl was brought forward by her parents right behind us, right about Caleb’s age, but her legs were completely wrapped in braces, and she used a tiny little walker to keep her upright while trying to walk.  At the end of the service our Pastor specifically highlighted Caleb and this little girl one more time for the congregation to pray over, and with that the service and the 21 day fast was over.

Lightning never struck.  I didn’t hear an audible voice from heaven that the miraculous had occurred.  What did happen, however, was that as the days of 2011 passed, Caleb made it through the whole year with only TWO seizures, and then 2012, and now 2013 have passed and we have never had to experience another one.  No personality inhibiting narcotics, no invasive surgeries, no days/weeks spent with Dr.’s trying to understand what I never could.  A miracle!  If that wasn’t convincing enough, watching that little girl that came up for prayer behind Caleb, and getting to know their family, I learned that shortly after that service THEY were contacted (they didn’t make contact, someone reached out to THEM) by a Dr. who had a procedure he thought would work in correcting their daughters legs.  They went through the procedure and now 3 years later, I’ve seen her walk and run across a room unassisted.  There is still evidence of an ailment in her legs, and its not perfect quite yet, but it is certainly a miracle none-the-less!