I’ve been on maternity leave for going on 6wks, and have mentally composed about 1000 blogs, then the end of the day comes and I crawl into a bag of chocolate chips (err…. bed… I mean bed) and stay there for awhile.  The chocolate chips aren’t doing much to get my pre-baby-body back, but I keep telling myself that’s what these next 6wks are all about…. it would sound more convincing if I wasn’t munching on some M&M’s while typing this.  Meh…. I got all three kids down for naps at the same time, if that isn’t worthy of a little celebratory M&M munching, then really nothing is!

It’s been a blur… seriously… We’ve been to water parks, zoo’s, museums, Virginia Beach, Pittsburgh, and Michigan, and have seen just about every single one of our existing extended family members!  The house is under construction… FINALLY… after our two month long plumbing nightmare, and Kevin just started his new job…. its been a busy 6wks!

The side effects are quite noticeable between Cub and Logan…. They’ve gone off the rails.  We’ve blurred the lines of reality, and fun ‘new baby’ life, and they’ve lost their compass.  Case and point, Logan’s three day bender of coloring on all manner of surfaces that are NOT paper.  “Bender’s” have a slightly different definition when you’re three years old.  First it was an orange sharpie on my dad’s white exterior siding of his house…. awesome.  Next, we had green marker on the floor of a school supply store, luckily that was easily remedied.  Unfortunately last nights crayon to his bedroom wall and dresser looks like it may require a bit more attention.  Not to be outdone, Caleb is having a great time excising his ‘big brother’ status and letting us know what he will and will not be doing.  He forget’s who he’s messin with… not gonna fly wee man.  He had his own minor infraction at the school supply store, walking out with a fancy little eraser (by accident I’m sure), but we got a good teachable moment outta that one, when he had to walk back in and explain to the lady what he’d done, apologize, and ask for forgiveness.  To top all that off, Logan decided to just pee on the floor this morning, despite having a diaper on, and being a few feet from the bathroom, the floor apparently seemed like a better option.   Yes, the wheels have come off.  I’m strongly considering solitary confinement….. for myself…..but this 2 hour nap, that all three are taking, will have to suffice.

It’s been 6 weeks of anything goes.  It’s been crazy, but its been a blast too.  Sure we’re paying a small price right now with a week or two where we batten down the hatches, and remind the lil men that yes, order will be restored, anarchy will not be tolerated.  Then I’ve got 6 more weeks, which I know will FLY by way too fast, where we find this new groove we’ll operate in…. I’m excited…. and freaking out a little bit.  A tidal wave of panic hit as everyone else’s kiddo started Kindergarten and I wondered for the 6,874th time if I’m doing the right thing.   Then I have to remind myself to breath, this isn’t permanent, and thank God for other ‘spicy mama’s’ out there that march to the beat of their own drum and are certain they are raising career criminals as a result of the parenting choices as well!

For those that missed it earlier, I posted ‘our’ first day of school pictures as well…..  Not your typical “Big Yellow Bus” picture, and I’m fairly certain Cub’s lesson was somewhat atypical for Kindergarten curriculum as well….  I’m thinking this will just serve as a useful documentation for any punk that wants to call my kid a weirdo for homeschooling…..   Sure we may be weird…. but we are also quite bad ass! 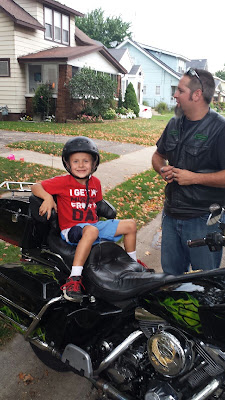 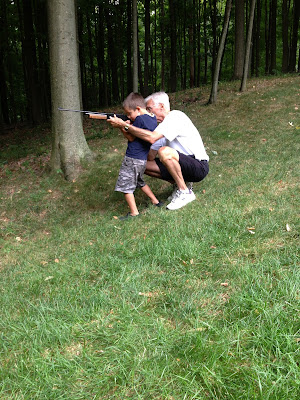