I couldn’t decide if I should title this post, “Adventures in Dining Out” or simply “Motherhood”, as I realized my ‘evidence’ corroborated the first, but my ‘experience’ …. it could have been any day… anywhere… it just happened to get caught on camera at a restaurant. I found it rather amusing that my experience tailed so closely on the recent drama over kids being ‘banned’ from a restaurant. It didn’t change my opinion on the ban, I think an overall ban might be extreme, but there are parameters, setting dining hour guidelines, that I think could be enforced to the betterment of all. Example, before 7pm all are welcome, afterward limiting it to an above age limit: giving fellow parents more sympathetic co-patrons to share their evening meal with, but allowing those looking for a certain ambiance, and relaxation to enjoy their meal as well.

Parents… We don’t get ambiance anymore. There is no ‘mood’ lighting, or polite conversation being had in the company of toddlers and infants, maybe as they grow… I’m still waiting for that. What I get is more of a strobe light effect, if the light switch is within reach, and by way of polite, I get “Excuse me” from Caleb incessantly while he attempts to interrupt ANY conversation that does not include him. He’s in his chair, and back out, on my lap, back down… Logan has taken to standing in his highchair after wriggling his legs free of the belt, an impending swan dive to the floor seems almost imminent now.
From the outside looking in, I could imagine an onlooker judging what would appear to be an utter lack of control. What that spectator wouldn’t understand is I’ve already run the gamut of disciplinarian actions trying to ‘mold’ my boys into beacons of decorum. We’ve spanked, bribed, placed in time-out, gone without meals, sat for literally hours (I think 3 is the upper limit now) waiting for a plate to be cleared, We’ve scolded, praised, and everything that could possibly be in between… to no avail. I want to break bad habits, not his spirit, so I’ve retreated to regroup until I come up with some ingenious parenting move he won’t see coming.
These antics aren’t reserved for meal times though, as a ‘ban’ at restaurants would imply. I’m a jungle gym practically anywhere. Their energy knows no bounds, at least none I’ve discovered, and their curiosity and imagination is ENDLESS. I’ve come to the cross roads where I can either listen to myself harp on every little thing, essentially crushing their spirit, or I can let them push the bounds I would like to see them operate in, saving my strength to reign them in on their truly death defying stunts. Until I find that ingenious parenting move they’ve yet to discover, I’m opting for the latter.
To illustrate…. An action sequence….
Caleb had just sprinkled pepper on my arm, and as an alligator was attempting to devour it. Logan was trying to give me a zerbert, which he’s recently learned, and also using my arm to pull himself up out of his chair. I had just discovered my mom was dying laughing as she caught this on camera. 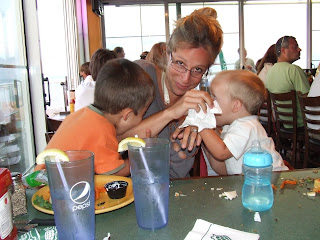 This is my: I’m glad I can amuse you face, are you going to do anything to help me? 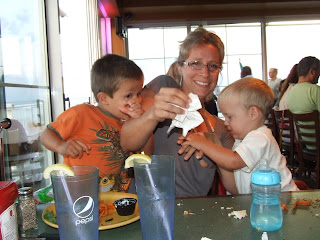 A brief respite… After the insanity subsides, what parent doesn’t find them-self staring off into space, mind utterly blank, enjoying for a brief moment the lack of overwhelming stimuli. (Do take notice however of the toothpick that Caleb is using for his ‘fork’…. this becomes important in the next picture) 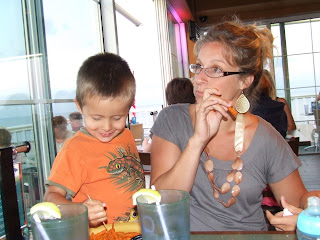 Finally… The shot immediately after Caleb attempted to feed me off his toothpick… What had actually occurred: The toothpick came flying at my face with incredible speed and strength for a three year old, with no food on it, and once again I was grateful that God compromised my eye sight, and gave me an aversion for contacts, so my glasses could double as protective eye-wear. 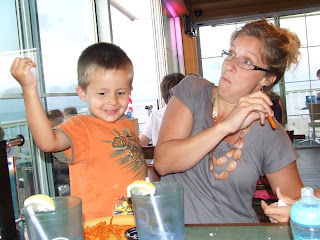 ***Notice all the while my left hand remains motionless in my attempt to use it as a barricade against Logan’s escape attempts…. ahhhhh a picture of peacefulness and rest 🙂 *****
Thanks mom for capturing “A day in the life of Me” 🙂