I like to consider myself a fairly laid back, go with the flow girl.   However, everyone has their limits…. Friday tested those limits.

First, I’ll explain how I thought the day would go.  I was looking forward to a couple social engagements, and outside of that figured it’d be a quiet day.  We had a play date planned in the morning, with a friend I hadn’t seen since she welcomed two sweet miracle men and endured house arrest while their preemie immune systems developed.  The evening agenda was to host a party celebrating the brief homecoming of an awesome couple we’ve missed since they moved to England.  It’s become something of a tradition (I stole from another fun friend) to have a ‘Springsgiving’, which is essentially just Thanksgiving in the spring, because who DOESN’T want to enjoy Thanksgiving dinner twice a year?!?  So I decided this homecoming would be the perfect opportunity to break out our second Turkey and celebrate with 20-30 friends all looking forward to spending an evening with the fabulous Wilson’s!

These things happened on Friday….. so did a few others.

Kevin decided to work from home so he could help with party prep, and while I confirmed with my girlfriend she and her boys were on their way, he jumped in the shower while AJ played peek-a-boo with him in the bathroom.  Shortly after getting out of the shower, I hear a thud and screams from AJ in the bathroom.  Kevin stepped out to grab some pants, and AJ had decided to scale the toilet, then throw himself off…. AND land on his teeth.  I make it to the bathroom in time to see blood dripping profusely from his mouth, and look down at the floor and see a long white object in a pool of blood.  The ENTIRE front tooth…. root and all, making it at least half and inch long, was no longer a part of my baby’s smile.  I gathered his sorry little self in my arms and worked to bring his sobs under control, while at the same time coming to terms with what I assumed would be a permanent gap for the next several years.  Once lil man’s tears were under control, I made the call to the Dentist and was surprised when they instructed me to place the tooth in a cup of milk, and bring it with to an emergency appointment they could get for us at noon. 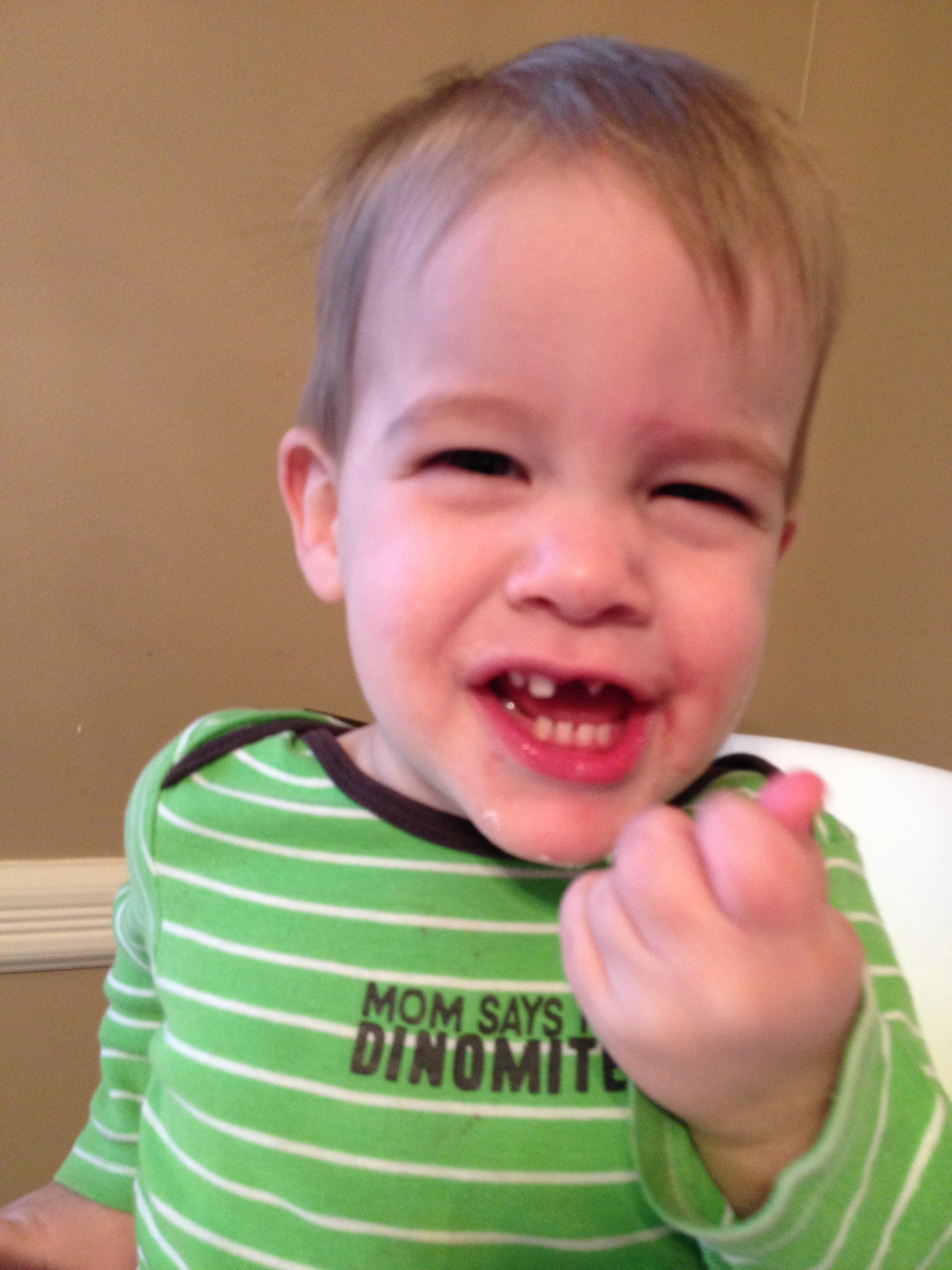 Kevin went downstairs to work and my girlfriend showed up a few minutes later.  We had a great morning catching up!  Her boys are adorable, mine were totally smitten playing with babies, and I always loving hearing the stories of women as they acclimate to motherhood.   There is something cathartic realizing you are NOT alone in discovering the reality of this motherhood gig is TOTALLY different than the picture your imagination created before you crossed its holy threshold.   We were still engrossed in conversation as the lunch hour approached, so Kevin took AJ to his Dentist appointment.  After helping get her men fed, she loaded them into the car so she wouldn’t miss the afternoon nap window, and headed home.  A few minutes later Kevin called, hangry from not eating yet that day, needing to get back to work after his hour venture out, and too alert me that AJ needed changing and would require a return trip to the dentist because he spit the tooth back out on the way home.

There was a flurry of activity when he got home…. I got a very stinky AJ (he currently hates being changed, so thrashes around on the floor), the boys wanted to ask 100 questions about the dentist, and Kevin needed food stat.  It was loud and chaotic.  So it only makes sense that this diaper would malfunction and  Poo would be everywhere.  His outfit needed to be changed, and while thrashing, poo was getting all down his legs and on his hands, making pinning him all the more difficult.  It was also nap time, and he was DONE with the day.  I tried to call the Dentist to see if maybe I could lay him down, and bring him when he woke up.  No go.  It’s was Friday…. apparently 3pm is closing time on Friday, so I had an hour to get there and get out.  So we got the outfit changed and I loaded him back in the car.   As we were getting ready to walk out the door, Kevin casually makes the comment that if it’s raining he can’t fry a turkey.  (Something about rain and hot oil not being a great combination)…. All I heard was, ‘hey remember those 30ish people coming about 3hrs from now, what’s your plan? Cause the original one of turkey aint gonna cut it anymore.”  I left in somewhat of a daze.

I pulled my phone out while driving away to call my lil sis and vent about my crazy morning….   This alerted me to my next surprise of the day.  At some point during our play date, AJ and Logan got a hold of my phone and deleted ALL of my contacts.  I had no phone numbers.  Not one.  Just a call history which had resorted to only indicating the number called…. because that’s helpful… who memorizes phone numbers anymore?!?

This would be the moment where an onlooker may have questioned my sanity.  I had a slight crazed look in my eye and was torn between crying and laughing maniacally.   I needed a voice in that moment…. a women’s voice that could hear my crazy, and remind me its all relative and life would just keep going, all the while being able to empathize with the CRAZY.  So I went to my text messages and found a convo with one of my girlfriends that was planning to come that evening and called her so she could talk me off the ledge.  She was perfect.  Just the right amount of ‘oh honey’ mixed with ‘don’t worry about the party, even if we sit in a room and stare at each other, we’ll have a great time’, all in a 5 minute conversation before pulling into the Dentist.

The dentist office was probably about as awful as you could imagine.  Having been there once that day, and realizing what he was in for, he started bawling as soon as we walked in the door.  My options were limited to restraining him myself while they worked, or handing him over to a stranger to do so…. both options sucked.  If my lil man was gonna be in pain, dang-it if I was gonna let some stranger hold him and make it all the worse.  So there I sat for the next 15-20 minutes while they re-inserted his tooth for the SECOND time, with what they said was a local anesthetic but for all the screaming and writhing, I’m not so sure about that.

Finally made it home just after 3pm, still had some work that I needed to get caught up on, a lil man that was having a ROUGH day and needed love, and a party to pull together.   Thankfully my men rallied.  They all mobilized quickly…. and brought me some much needed sanity.  Kevin is my hero.  He saw the maniacal/panicked look in my eye and told me not to worry about the Turkey, he’d figure it out, and promptly started peeling potatoes.  Caleb was picking things up and putting them away, also astutely attuned to my precarious mood and kept coming up to ask in a very sweet tone ‘what else he could do to help’.  Then the big guys ran out to grab a few odds/ends and came back with a big bouquet of flowers to brighten my day.

Somehow, by the grace of God, it all came together.  While I was putting the last dishes into the oven to cook, and restoring order to the kitchen, our friends started to arrive.  After hearing about my crazy day, my girlfriends quickly addressed any last minute needs, and the party ensued without interruption. 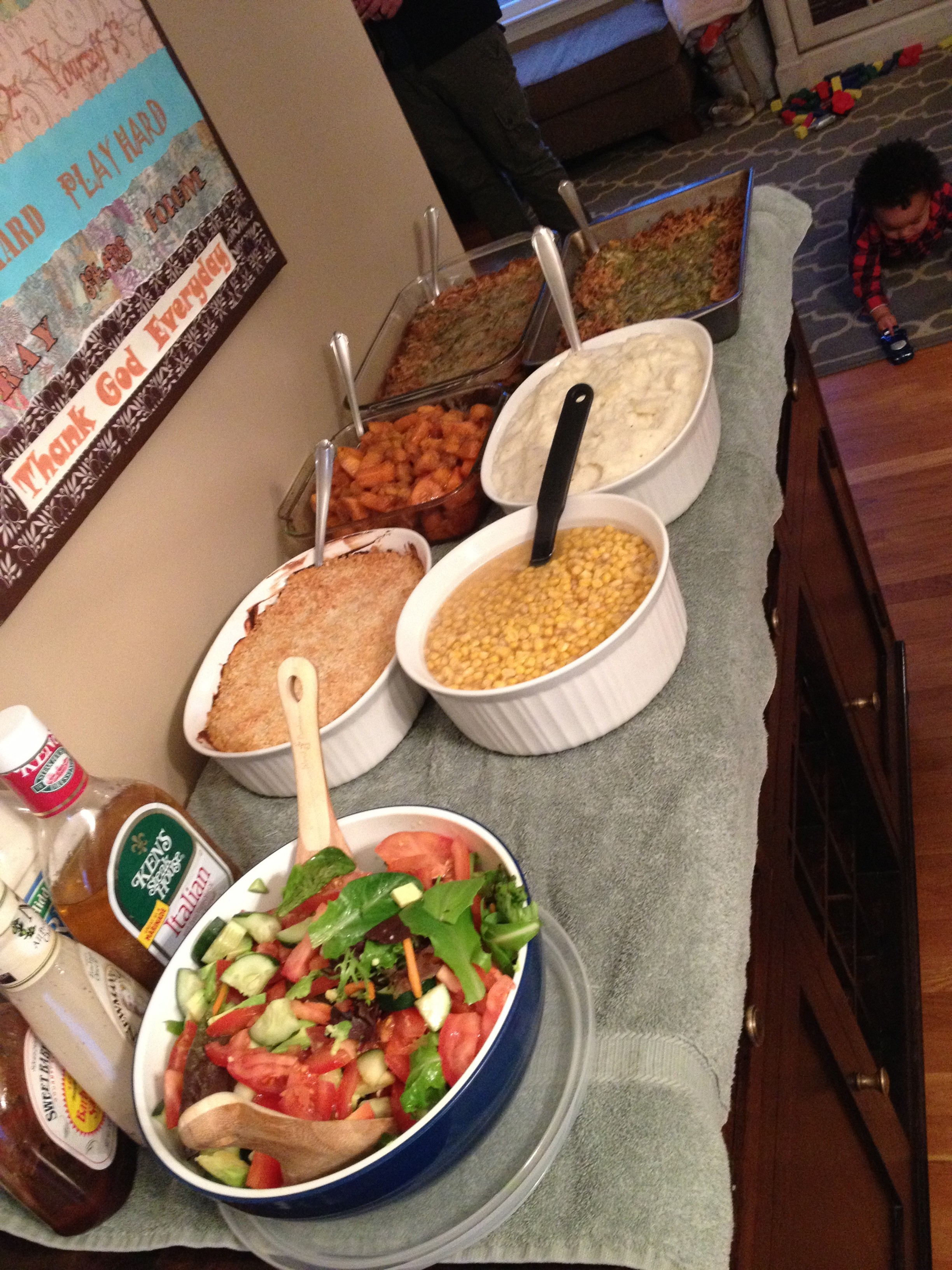 The thought of cancelling never entered my mind, because deep down I knew it wasn’t about the party but creating a place for us all to be together.  My heart is FULL when my house is FULL…. not when my house is clean, or when someone is raving about a recipe or decoration, but when people are laughing and kids are running up and down playing with their friends.  Finding my corner of the couch, and watching all of the life fill my house, in spite of the insanity that tried its best to derail those efforts, was the BEST part of the day.

In a world that is hell bent on convincing us life is too crazy to connect, to create space to just BE with people, or feeds us lies its about how we or our house looks and the food we serve…. I look at these faces, and pray I never lose sight of the PEOPLE on the other end of the effort… They are ALWAYS worth it! 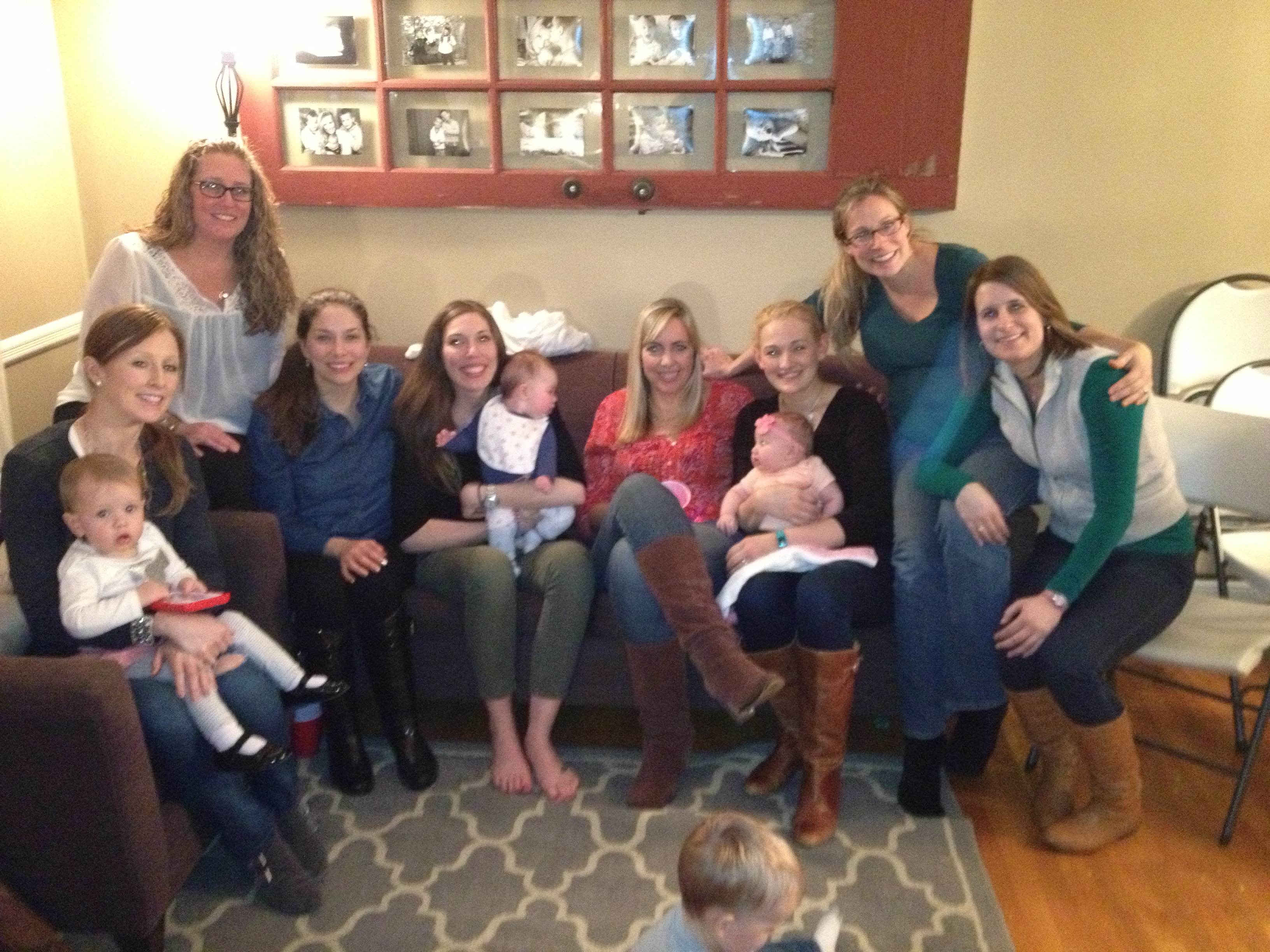 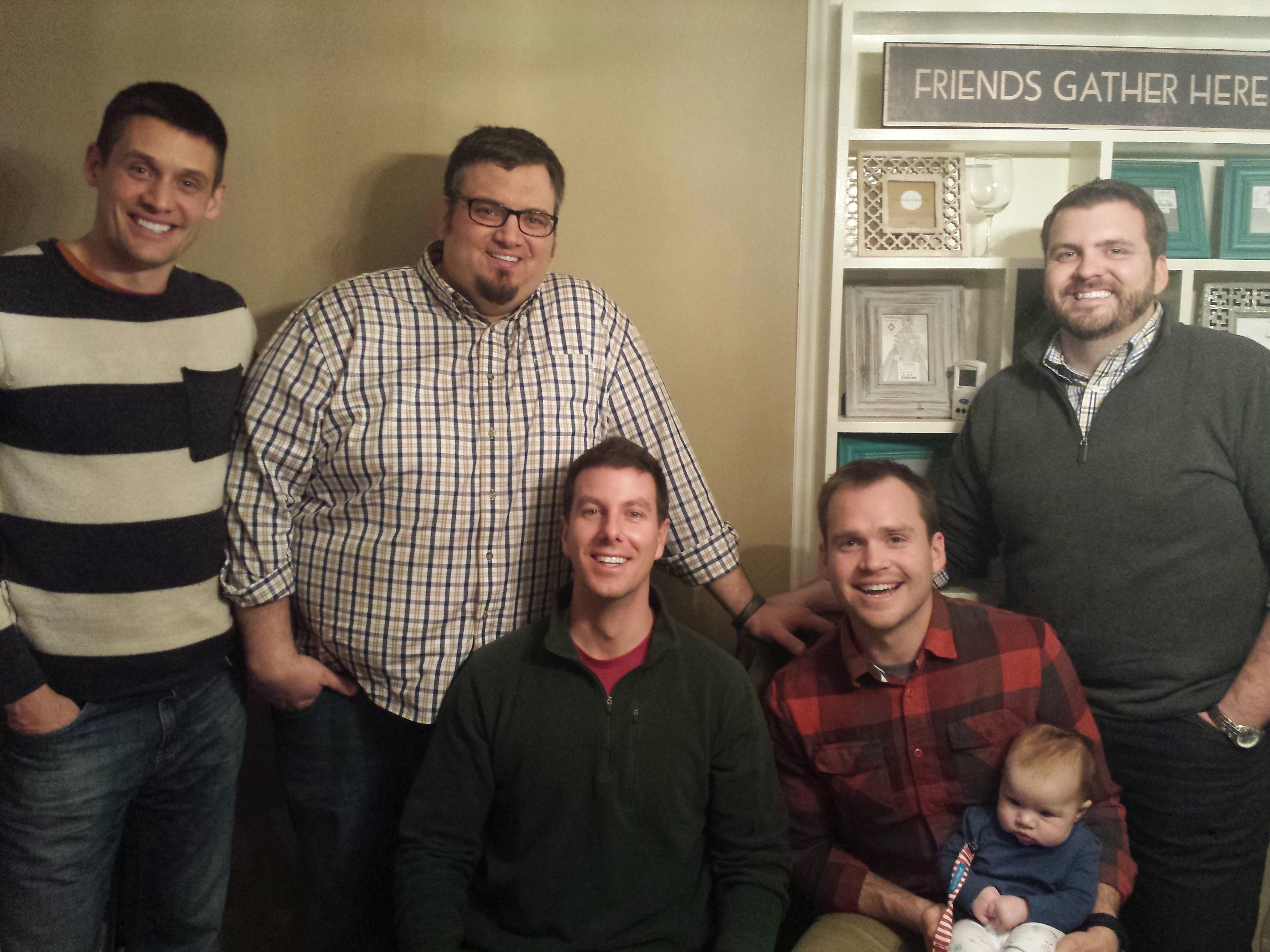 Saturday brought a breath of fresh air as well…. Quite literally…. Rather than hosting, we got to attend a delicious pig roast celebrating the graduation of one of my friends son, and connect with ANOTHER fabulous group of girlfriends! 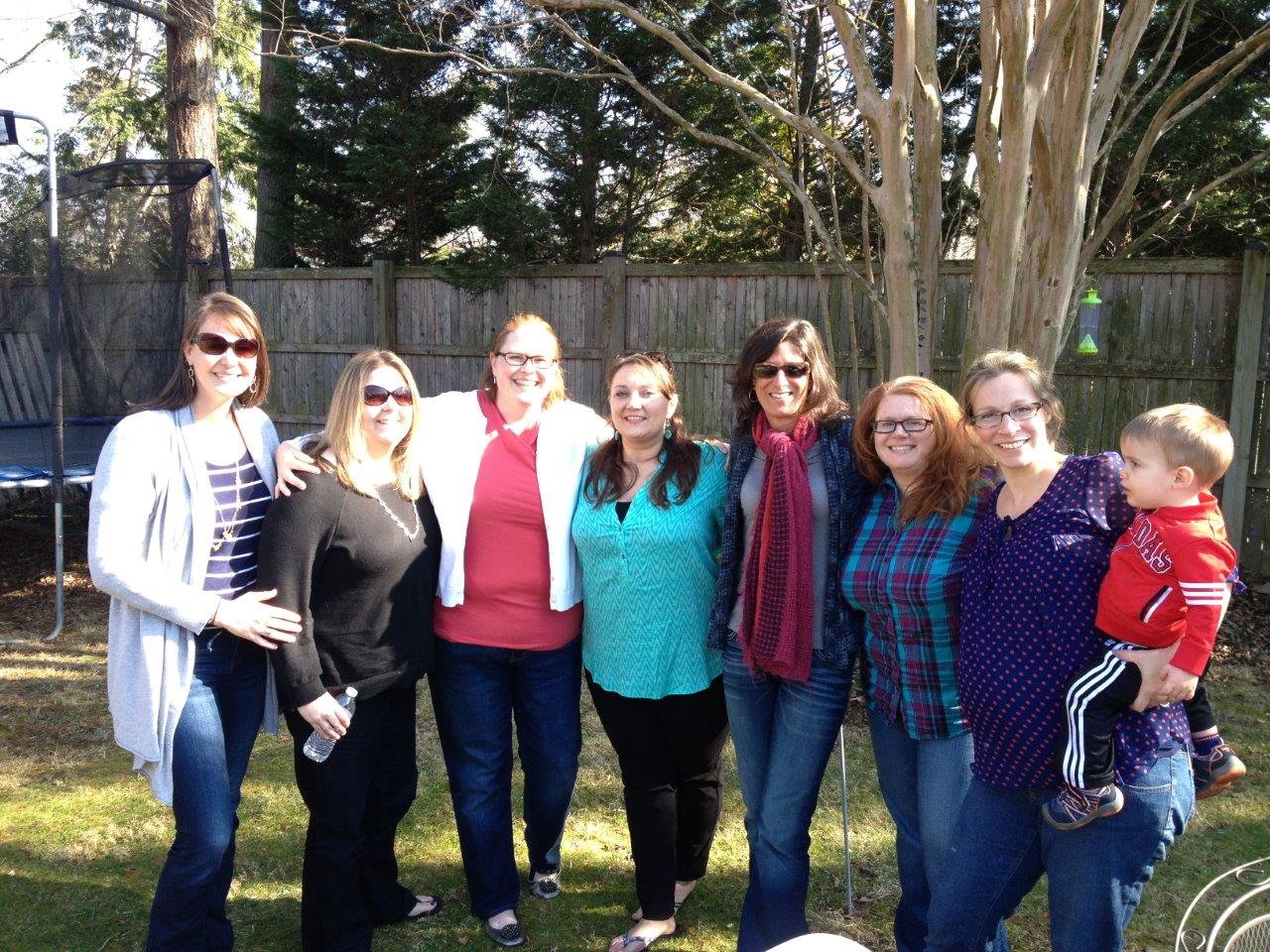