I was talking to my sister on the phone yesterday and she was telling me about her labor day weekend.  She explained how a significant portion of our extended family on my Dad’s side came together at our families cottage to celebrate the end of an era.  I was so jealous I didn’t get to be there for it.  Had I known, I probably would have driven home to partake in the festivities!

About 17 or 18 years ago my parents bought some property on White Lake, in Montague, Michigan.   This wasn’t a ‘new’ thing, as my parents had been buying property their entire lives in the form of rental properties to fix-up/flip, whatever.  However, this place was different.  For starters it was a TON of property, in comparison to their previous scale.  Picture Kennedy compound, but entirely NOT Kennedy.  The property had a big house on it that was in a state of complete ruin.  Think freaky haunted house, windows busted out, doors hanging on hinges, sunken porch…. Disaster.  It also had a normal cottage type house on the bluff of the hill, and then 4 additional smaller cottages down an embankment that were summer rentals to a loyal bunch of summer visitors. 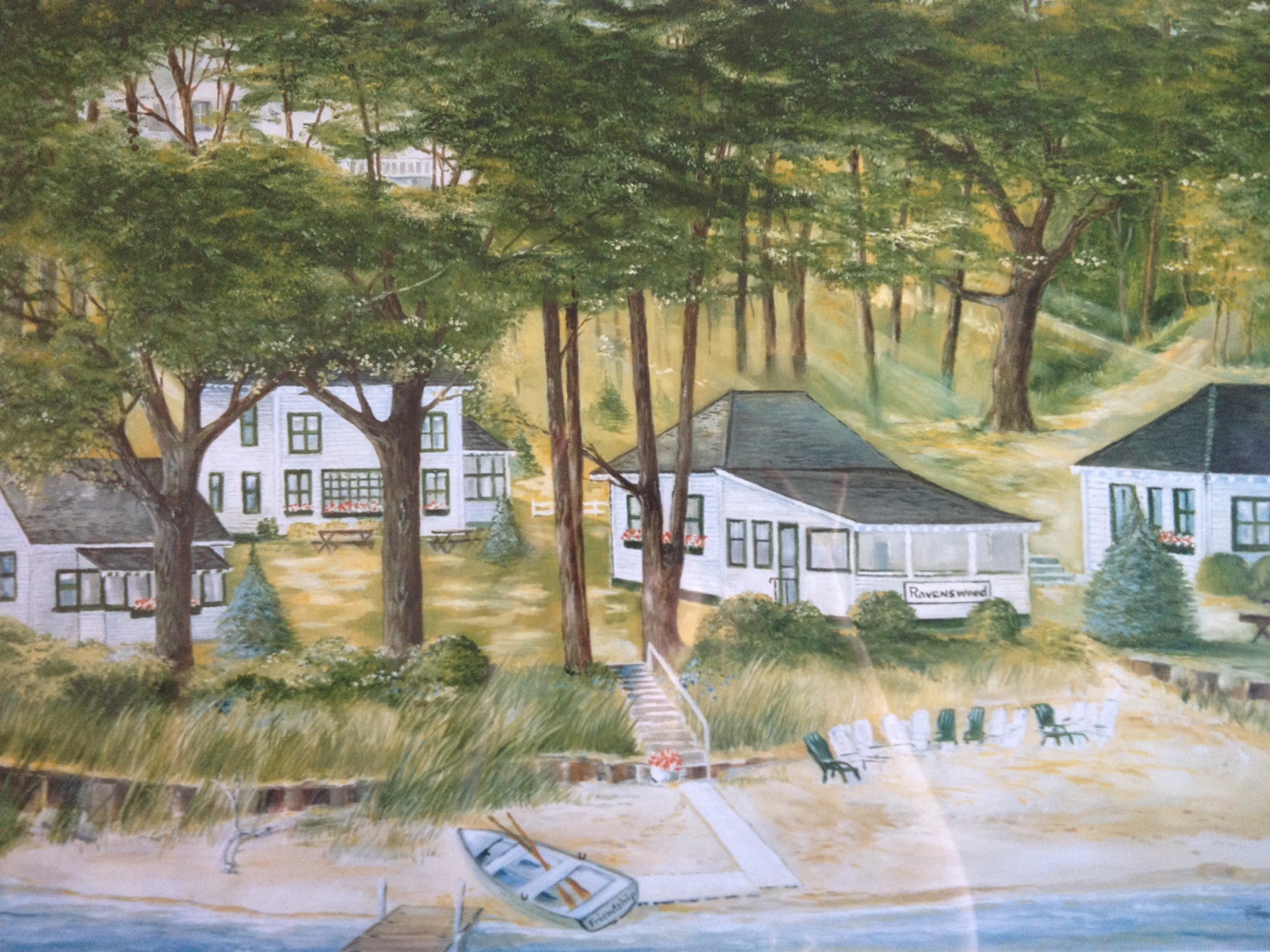 There was a magic to this place, but it did not come without its baggage.  The previous owner had struggled mightily with depression while living on the property, and the property would end up claiming my parents 25+ marriage in its wake as well.  However the memories that were created on that slice of land, over the course of 18 years, were pretty incredible.  After the drudgery of the ‘fix up’ stage had passed, it became the site of many of my first ‘rebellions’.  A party in high school my senior year, that I’m pretty sure my parents never knew about (until now).  Sneaking out with some of our renters at 19 to hit the towns local pub.  Apparently in the sticks, if you don’t act a fool, they don’t ask for I.D..  Smoking pot around a campfire, and it was the place Kevin got to know my family best and be welcomed into the fold.   (Sorry mom and dad, guess a full confessional is better late than never!

This property was also the site for a vast majority of family reunions for nearly two decades.  Simply because it was the biggest piece of property that could hold us all.  After a fabulous day jumping off piers into Lake Michigan, we’d all bring a dish to pass and gather around the BIGGEST picnic table you’ve ever seen…. I’m not kidding, it was specially made for that place and could sit like 20 at bar height when we all huddled around it.  After dinner, preparations for bonfires would begin, and everyone would grab a chair and sit together for the next several hours talking about whatever needed talking about, or engaging in a game of charades. 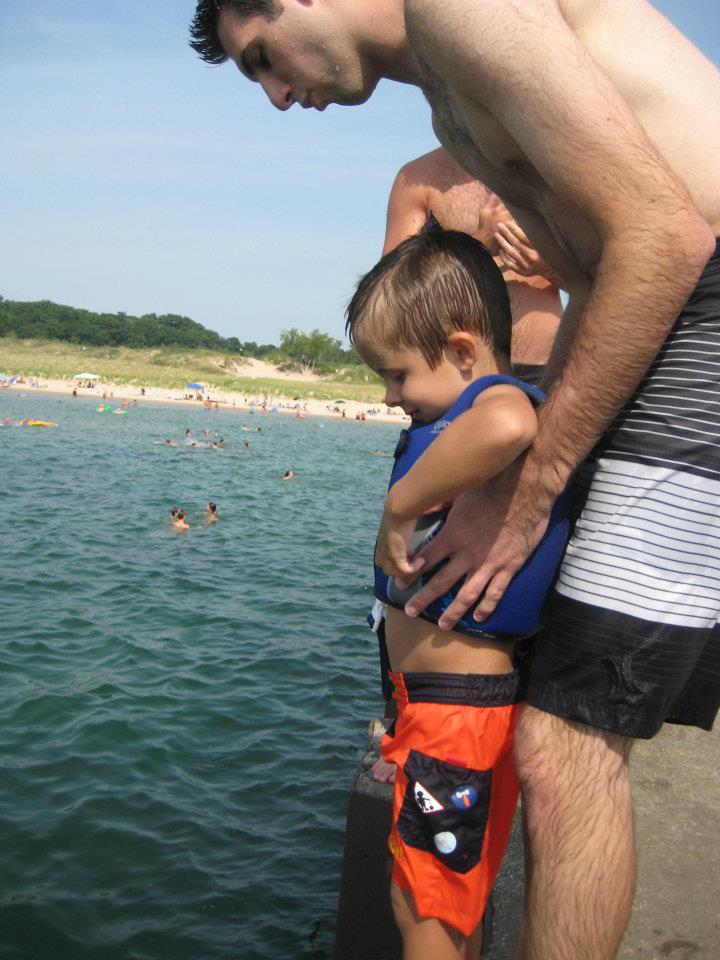 (Sweet baby Cubby with his 2nd cousin Steven…. Look at my lil man at 4 years old) 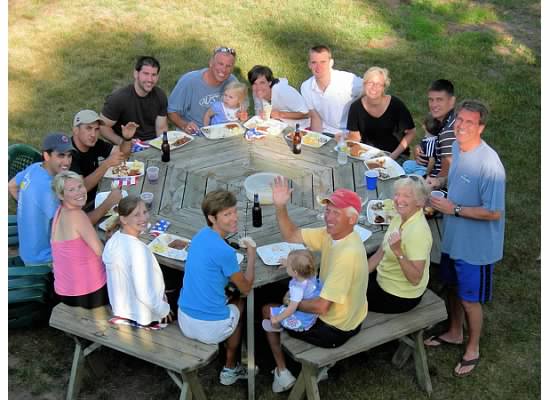 It’s only appropriate that this last Labor Day the family bid farewell to the property in exactly the same way.

My sister began explaining the lively debate that ensued around the bonfire that night.  I’m not sure how, but apparently the topic of Creation vs. Evolution came up.  You need to understand that my family are professional pot stirrers.  If someone get’s something controversial going, look-out.  We also manage to canvas a bit of the spectrum, as we had my 20 something cousins, all the way up to the matriarch and patriarch of the family present whom are devout Catholic.  Through the generations there are ‘varying’ degree’s of devotion to the Catholic faith, and a branch of us that have migrated more toward the Christian non-denom arena.  Our souls are being well covered in prayer to repent and return to the fold, but that is neither here-nor-there.

My sister made the comment that she couldn’t help but think what I would have added to the conversation, had I been there.  I confessed I would have tried to stay out of it as best I could, deferring to the wisdom of one of my Aunts that I look up to in managing that dynamic.  However, I’ve thought about it more, since our conversation.  If I’d had the chance, I hoped I would have been able to say something like this.

It doesn’t matter to me.  I think overall, its a mix, that we were created to evolve.  How it all started, I don’t really have the desire to investigate.  Hebrews 11:1 says, “Now faith is the substance of things hoped for, the evidence of things not seen.” and to me, that’s it.  My hope is in a God that loved me so much, He thought it good to create a linage that would enable us to all be around this bonfire, at this point in time.  My hope is there is a reason we’re all here, that its not on accident, but rather on purpose and my hearts desire is to figure out what that purpose is.  My hope is that while I’m searching, someone’s got my back, someone that would never leave me or forsake me, no matter the shenanigans or tom foolery I may pull.   I can’t prove beyond a shadow of a doubt, any of the things the World would like me to prove in order to accept where I’ve placed my faith, but I don’t have to.   The evidence of the things I can’t see are the peace and contentment I’m able to have in the midst of the most INSANELY CHAOTIC season of my life (to-date).  I have a joy and an excitement (most of the time), that when I look out at the World around me, I see replicated so very rarely that it makes me sad.  These debates have gone on for centuries and will continue to go on for centuries long after we’re gone, but at the end of the day it doesn’t matter to me where the dirt underneath my feet came from, or what the first man actually looked like.  What matters is what I believe in my heart to be true, and the undeniable benefits I believe I can attribute to it.  My gut tells me, if you always listen with your heart, at some point in time, you will find a truth that grounds you and brings a peace and fulfillment that is altogether impossible to articulate as well.  Until then, maybe we agree to disagree, and still love each other a whole ridiculous bunch, because we’re really fun people!

I wish I could have been there, but am thankful for the incredible memories I got to have there, and am excited to see what adventures my Dad embarks on when the sale finally goes through!