While snuggling Logan into a morning nap, that was DESPERATELY needed after listening to his world (in his estimation) literally end, I realized something: The sharp edges of parenting have started to wear off.

It started out as a nice walk.  Cub was on his bike, Logan scooting behind him as fast has his one legged push could propel him, and me bringing up the rear with AJ in the stroller.  Shortly before the half way point of our walk Logan decided his scooter was just not scooting FAST enough to keep up with his brother, and wanted to run.  I draped the scooter over the stroller and let him take off.  This lasted longer than I thought, but ended abruptly when he finally concluded his feet wouldn’t do the job either, and dissolved into a fit of tears that he couldn’t catch up.  I tried to reassure him that both methods he’d chosen were still faster than anything I had done, and I’d be happy to have him walk alongside me.  However, for the remainder of the walk his foot was either going to fall off, he was falling too far behind, I was walking too fast (at literally a snails pace, any slower and we would have been stopped), or he was TOOOO HOOOOOOOOOOOOOT.   His performance was near Oscar worthy.

Logan falling asleep is akin to the behaviors of a dog, circling a particular piece of carpet approximately 47 times before settling down.  He thrashes, kicks off the covers, pulls them back on, puts his head on the pillow, under the pillow, next to the pillow, rolls about 15 times and then finally settles.  This process used to bother me to NO end, because for the process to even END successfully, I had to be there next to him enduring it alongside him.  I simply couldn’t understand how someone so OBVIOUSLY tired, suddenly had to move so ridiculously much to fall asleep.  I used to fight the process, and in doing so fought him.  Looking back now, I see that only ever EXTENDED the entire production of falling asleep, and more often than not escalated the situation, as he was clearly already tired to begin with, and now I was also annoyed…. recipe for disaster.

As I laid there beside him today, fake sleeping (and ALMOST getting their for real) while he completed his ‘routine’, it dawned on me just how MUCH control they’ve wrested from my tightly clenched fists over time.

Parenting really has been the epitome of trying to place a square peg in a round hole, at least it was for me.  I was a night owl.  They woke up at zero dark thirty.  I was raised in a home of hospital grade cleanliness, and had grown an affinity for it.  They didn’t think twice about rubbing grubbie fingers on everything, and home was only fun if it was an obstacle course of every toy, utensil, and knick knack they could reach, yet for the life of them couldn’t return.  I enjoy talking with adults, yet it was precisely at the moment I would get engaged in a nice conversation they would discover an earth shattering piece of information that couldn’t wait to be shared.  I would make them a meal, proud of how domestic I’d become, that they would stare at and complain about, until shortly after I cleaned it up, at which point they were now starving. 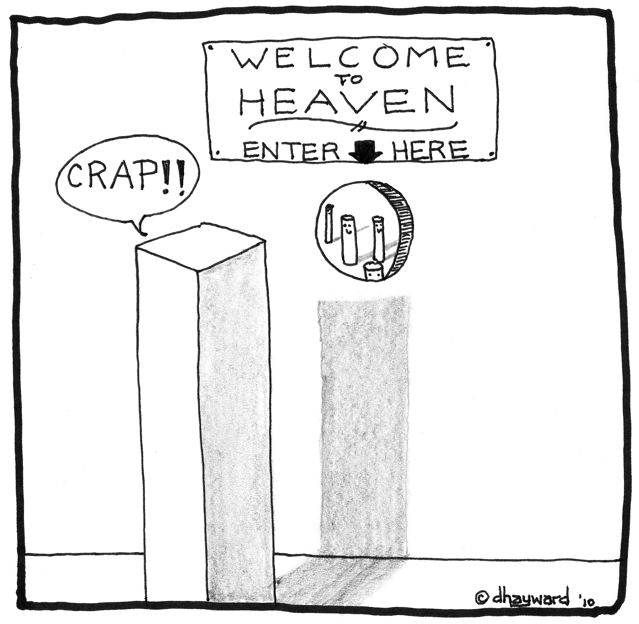 For 6 years now I’ve tried to jam the peg in, often frustrated that every battle had to be so freaking difficult, until I was pleasantly surprised this morning, when it was a little easier than before.  For all intents and purposes, the situation hadn’t really changed…. There was a fit, a course of action was decided upon (the nap in this case), thrashing, and finally rest, yet there was more peace than there has been before.   I would love to take ALL the credit that I’ve found zen, my center, the gift of patience from the Holy Spirit, or whatever, but MOST likely it was 72 hours without them (which is why I’ll go to my grave claiming time AWAY from kids is critical!!!).  It’s a dulling of the edges.  Like sand paper running round and round and round a square peg, for 6 years my kids have been running circles around me and they’ve softened the edges, and every year we fit just a little better than we did before.