The newborn honeymoon season is over.  I’m not insinuating that Selah has grown a set of horns and colic over the past few weeks, rather the introductions have been made, the oh’s and ah’s have occured, the meals delivered were delicious, and the resting and recovering was delightful.  However, I knew the time would come when order needed to be restored, and yes…. that the expectation for me to FINALLY start thinking about what’s for dinner  again would happen.

Knowing that time would come doesn’t make living it any less painful.

Being a GREAT parent requires you to be on 24/7, 100% of the time.  You hold the same line for every behavioral issue, you never lax an expectation, and while you love to dole out rewards and privileges for good behavior, you’re careful to monitor them closely.  Walking the fine line between gratitude and entitlement.  I’ve determined being a GREAT parent might be an impossible standard.  I’m o.k. with being a good parent.  Good parents acknowledge their own weaknesses, in that OH MY GOSH its EXHAUSTING being on 24/7!

So I basically took 7 weeks off from parenting.  They got extra movies, school was suspended, snacks were not monitored, and cleaning up after oneself, well, I’ve never gotten a handle on that one yet.  With four weeks until I go back to work, its time to get serious again, ain’t nobody got time for the shenanigans they’re trying to pull!

Before Selah was born Logan and I had started to work on his reading.  I used the same book that was successful in getting Caleb to read, and before Selah was born we had a pretty steady rhythm going….. Now….. The books subtitle is making a mockery of my life! 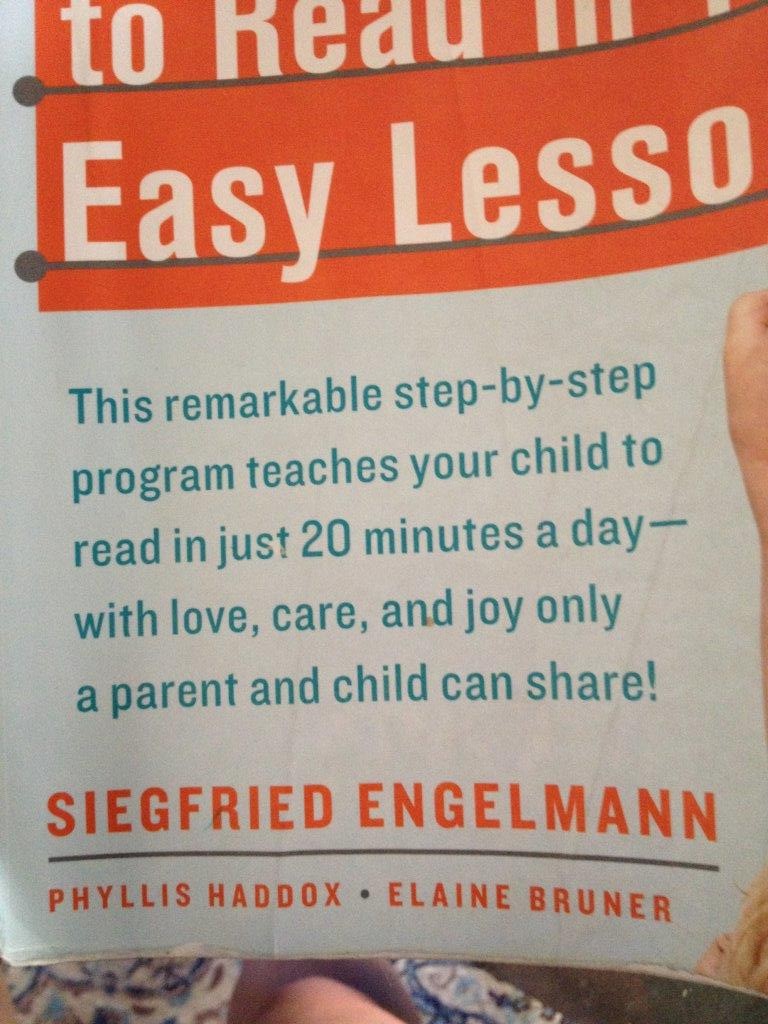 ‘In just 20 minutes’….. ‘Love, care, and joy’…… Is there NO truth in advertising anymore?!?  I love my child, its true, and I obviously care for him, otherwise I wouldn’t be concerned with his education at all…. But JOY is a stretch my friends, and 20 minutes is a BOLD. FACE. LIE.     Anyone can manipulate numbers to tell the story they want heard.  I’ve found the spin here… I think they averaged the ‘lesson’ time from all 100 lessons in the book.  When we were on lesson one and two, blazing through in 5 minutes flat, Logan and I were giving each other high fives at the end of each day.  Now we are on lesson 78.  This past week, we’re averaging 3-4 HOURS of mind numbing, stab yourself in the eye with a pencil, TORTURE sessions.   Lest you get all concerned for my sweet boys well being, let me explain to you that he has demonstrated (on more than one occasion) the ability to complete this lesson in under an hour.    What we are dealing with is laziness, and its attacking me on ALL fronts.  Caleb is no better.  What should be catching up on his 30 minute a day math worksheets, he’s masterfully showing the ability to extend to 3 and 4 hour marathon whine sessions.

They’ve also ratcheted up the sibling rivalry to deaf-con five.  In a desperate attempt to find some encouragement for them I hoped the Bible could provide a relationship I could point them toward…. Except Cain killed Able, Jacob stole Esau’s birth right, Joseph’s brother’s sold him into slavery, Rachel and Leah were jealous of each other, Mary and Martha had their issues.  James, Jesus’s own brother, didn’t even believe he was the Messiah until AFTER he rose from the dead?!?  Live with Jesus you’re whole life, seeing everything, and its not till AFTER he’s dead that James can acknowledge… alright, you’re right, he was pretty special that one?!?   Lord, keep them from killing each other, and me from killing them!

They lost out on dinner Wednesday night because it took them 7 hours…. SEVEN HOURS….. to clean their room.  I cleaned the entire house, and made dinner in the time it took two of them to clean their room.  On Sunday, Kevin asked Caleb to move the clothes from the washer to the dryer.  He did.   He put the wet washer clothes ON TOP OF the clean, dry clothes in the dryer.  *Palm—->Face*.    At 7 that is not a lapse in judgement, that is more laziness.  So his punishment was to separate the clothes and then after church I told him to fold the dry clothes.  After 5 minutes down stairs he came up looking for lunch.  When I asked him where the clothes were, the story started that he put them away…. except he never made a trip upstairs to where he would have had to put the towels and our clothes away???   When challenged, after about 5 minutes we discovered he shoved BOTH loads back into the dryer?!?  That earned him a one way ticket to the backyard where I dredged up some fantastic punishment from my own past…. moving the woodpile, one freaking log at a time. 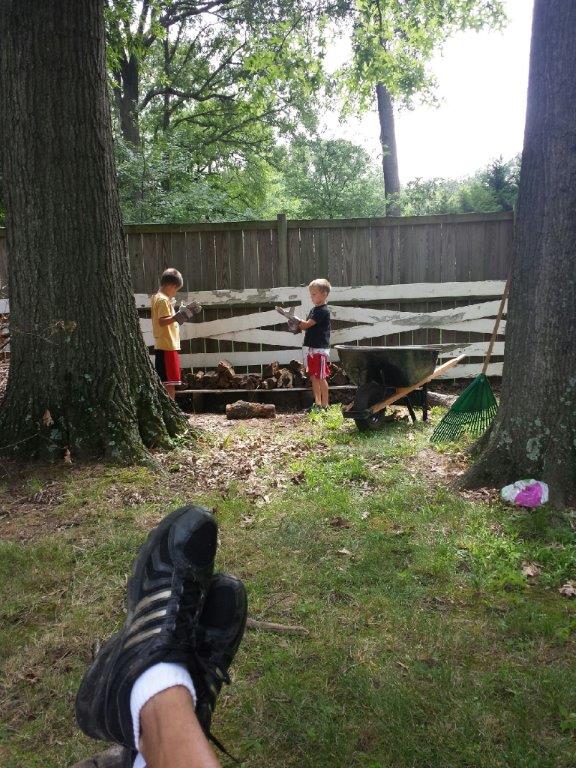 (Yes…. if you look closely Logan IS wearing his underwear on the outside of his shorts.  Even being ticked with them, I couldn’t help but laugh every time I looked out the window.  Dad kept them on task)

If he’s not careful I’m going to be digging up a few other classic punishments from generations past….. Cutting the lawn with scissors, washing the car and/or bathroom with a toothbrush, raking the woods, filling a gallon ziplock bag with acorns from the backyard, washing all the dishes in the cupboard after I have the fun of covering them with ketchup, and one of my all time favorites (least favorite when growing up), coming into my room only to discover my parents had packed up all of my belongings, every last thing, sheets included, and strewn them all into the backyard/basement, with a note that said “Pigs live outside.  If you want to live inside make sure everything is put away nicely.”

Despite ALL of that, I’m still enjoying my leave, truthfully.  I’m thankful for these four weeks to restore order before chaos ensues with work, the school year picking up, and TRULY figuring out what our new reality will look like.  It’s also been a helpful exercise in getting Kevin and I back on the same page with family planning.  He just saw the light before I did.  I was drunk on the newborn scent. It hit me when I was cleaning the kitchen up for the SIXTH time after only two meals had occurred one day.  I’m ready for whatever is next.  This has been an incredible season of blessing, watching all of these sweet lil lives join our family, but I know God’s got incredible plans for all of us, and I’m ready to see what that next adventure could be!

And because, with as cute as she is, no post should end without an updated picture of my lil cutie! 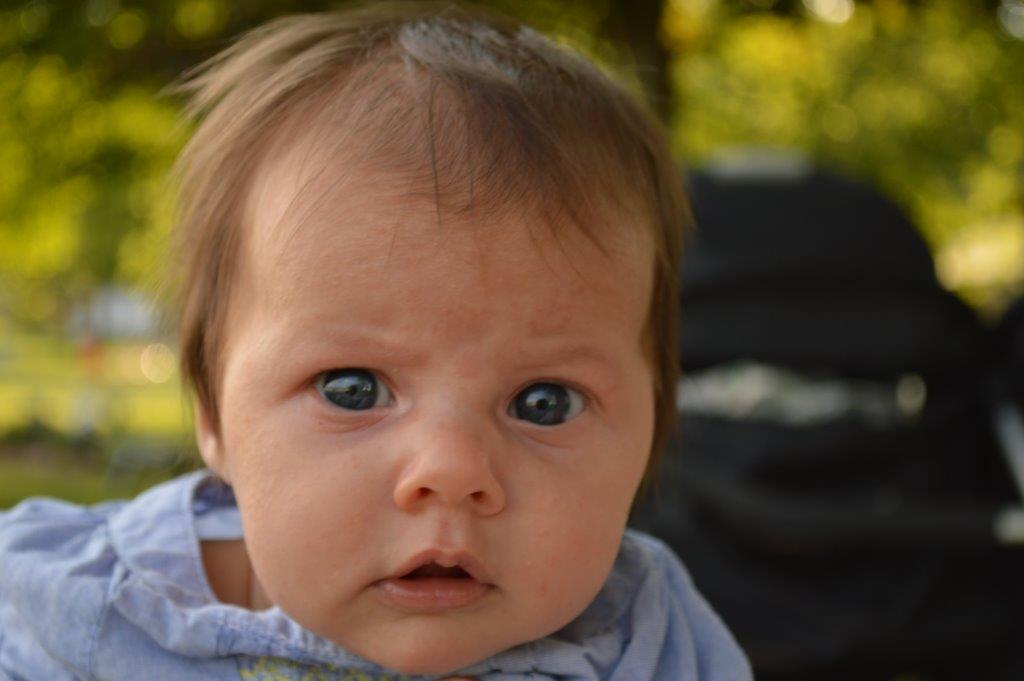