After Kevin and I had been dating awhile, I’d learned the interesting fact that he and one of his brothers had been born at home.  Very seriously I looked at him and said that would be a tradition that would NOT be carried on, that I was very much looking forward to all the drugs I could get my hands on.  I also said I would NEVER home-school, or be ‘that’ mom with the dirty ‘mom’ car.

Given my track record, I’ve started saying “I’m NEVER going to have a girl”….. 😉
So many people have asked about the ‘birth story’, I figured it was about time to put it all down before those wicked fancy hormones come along and erase all recollection of the event.  I can already feel them nipping at the corners of the memories and replacing them with sweet smelling infant elixir!
The first question I get most often is WHY?  Why give up the option of drugs?  Why risk the mess at home?  Was I insane?   The jury is still out on the insanity plea, but the easiest answer is, it made sense for our family.  I had a history of fast labors.  We did not enjoy all of the ‘protocols’ hospitals subject you too unnecessarily, and the never ending trail of bills that stacked up were enough to convince us to see what alternatives existed.    We used the mid-wives at Birth Center, right on King Street, and the entire experience was phenomenal.  I never felt rushed through an appointment, they cared about all the details, and were very encouraging in whatever choices I wanted to make throughout the pre-natal process.
As my due date loomed closer, I made sure to reiterate often that my history was to go quickly when things got started, as I was a little nervous I’d miss the timing and that Kevin would be catching this one…. Which almost happened anyway!
Sunday started out like most do.  I’d been having contractions throughout the night, but they were very irregular, and I could doze in/out between them, so when morning came around I didn’t see any reason not to get ready and head to church.  I told Kevin that I thought it ‘could be’ today or tomorrow, and he suggested we stock up on a few extra groceries after church.  Things remained pretty irregular throughout the morning, and in an effort to make some progress we went for a walk to the park with the boys after lunch, which was followed by a nap after my interrupted night of sleep.   Contractions woke me up again, and were getting closer together, so after Kevin finally had enough and stood directly in front of me, I finally called a mid-wife around 4pm to let them know what was going on.  The contractions were regular now, but still manageable, and I didn’t want them going away, so we hit the pavement again for another walk around the neighborhood.
At 5:30p, it seemed pretty obvious that our efforts would pay off and that baby was in fact on his way, so I called the mid-wife back and said they better head our way.  We sat down for dinner, and talked with the boys about what was about to happen, and then things started to pick up intensity for me and I headed to my room to get as ready as I could. At about 6:30pm the mid-wives showed up and Hannah got home to help keep the boys distracted…. Everything moved REAL fast from there.  I asked them to check me, and I was already at a 7, and over the course of the next 30 minutes it all blurred together…. I remember asking for guidance on how to manage the pain better, and they suggested a warm shower to help relax me, that lasted for about one contraction and I told them I had to push and 3 minutes later AJ was here.  I know… not much of a ‘story’…. but it just moved SOOOOO fast!  The mid-wife teased me that she’d never seen a woman ready to push move as quickly as I did from the shower to my room, but adrenaline must have kicked in by that point, cause I was only focused on one thing, whatever had to be done to make the pain stop and getting the baby out seemed to be the fastest way!
I had been praying for this labor, since the moment we decided to venture it at home.  Pleading with God that it move quickly, and be as pain-free, or at least manageable as possible.  As they managed all of the after-birth details, I just kept saying “thank you Jesus”…. SO thankful that He’d delivered above and beyond, a perfect birth!  While I’d be lying if I didn’t say there were certainly about 10-15 minutes where drugs would have been AWESOME, overall the experience outweighed those minutes a thousand to 1!  Being able to recover in the comfort of my own home, without Dr’s poking/prodding me every few hours, being here for the boys to wander in and out at their leisure without having to send Kevin home to pick-up/drop-off etc…  Yes, to the second most often asked question…. I would do it again 🙂
Since things moved as fast as they did, we didn’t capture much of the laboring process on camera, but below are a few of the fun pic’s of them doing the new born exam afterward. 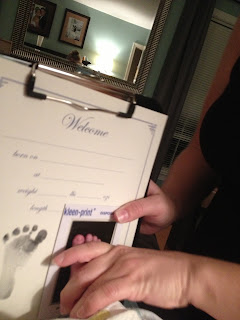 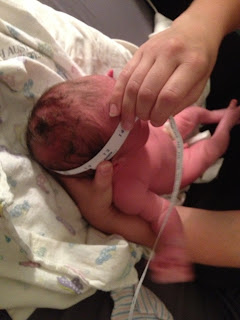 AJ getting ready to be weighed 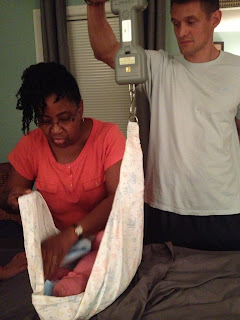 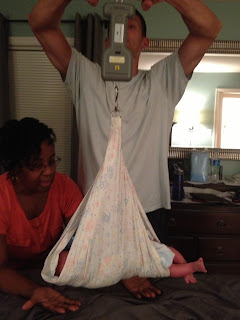 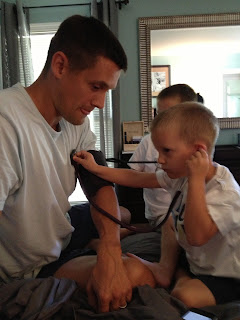 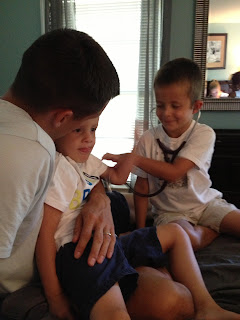 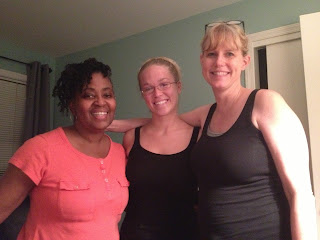 Our newly minted “Party of 5” 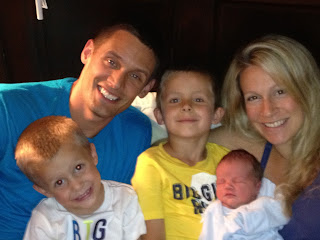 Welcome to the world Andrew Joseph “AJ” Alspaugh!  You are an answer to many prayers, and we are so thankful God gave you to us!!!
Andrew Joseph Alspaugh
8lbs 4oz 21.5″ Long
Born at 7:28pm on Sunday 7/28
Kissed by God on the nose before landing in our hearts forever! 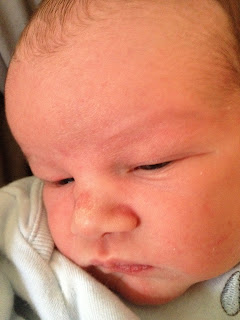